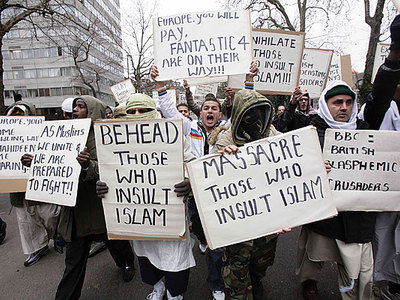 The following has been reported …

Earlier this week, the Qatar-based international Union of Muslim Scholars– headed by Yusuf al-Qaradawi, the spiritual guide of Egypt’s banned Muslim Brotherhood– called upon the United Nations to make “contempt of religions” illegal.In a statement released on Tuesday, the Union said that there should be “protection for ‘prophets’” and urged the UN to issue a “law criminalizing contempt of religions and the prophets and all the holy sites.”

Hey, this is a fantastic idea, I love it, and so with immediate effect we shall ensure that the UN will impose by force a worldwide ban anything that deploys contempt of Religion. So first up we have a text that contains some hate speech directed against Jewish people, Christians and also disbelievers – the Quran.

(There are lots more similar references)

Ah but banning the Quran was not the intent of their call, but that is the implication of it.

So here is the issue.

Criticism of Islam is generally deemed to be Bigotry, Islamophobia, Disrespect and hate, but when Muslims do exactly the same and criticise other beliefs or non-belief, it all suddenly becomes just fine.

Nope, it does not work like that, this is an all or nothing deal.

Either … we impose a ban on any criticism or any religious belief, and the implication of doing that would be to impose a ban on every religious text out there including the Quran, a text that contains rather a lot of hate speech from the viewpoint of other beliefs and also non-belief …

Or … we permit people to criticise any and all ideas and beliefs.

Since we left the concept of theocratic dictatorships far behind, the only real way forward is the latter (but you knew that, right?)

So when it comes to the various Islamic scholars demanding that the UN ban any criticism of their belief … “Hey guys, welcome to Secularism 101, you get to keep the Quran, and everybody else gets the right to carry on criticising your beliefs”.

Such demands will of course continue, and that’s fine, they have the right to do that. The Union of Islamic scholars will continue to demand that the UN ban any criticism of their specific belief, and the UN will continue to happily ignore them.