Yep, it has happened yet again.

The religious group that takes Mark 16:17-18 literally have now discovered once again that it was not such a great idea after all. If curious to know what I’m on about, well that bible text reads …

17 And these signs will accompany those who believe: In my name they will drive out demons; they will speak in new tongues;

18 they will pick up snakes with their hands; and when they drink deadly poison, it will not hurt them at all; they will place their hands on sick people, and they will get well.”

So having read those verses, a few believers have thought to themselves, “Oh, what a jolly good idea” and so their religious meetings involve picking up deadly snakes. 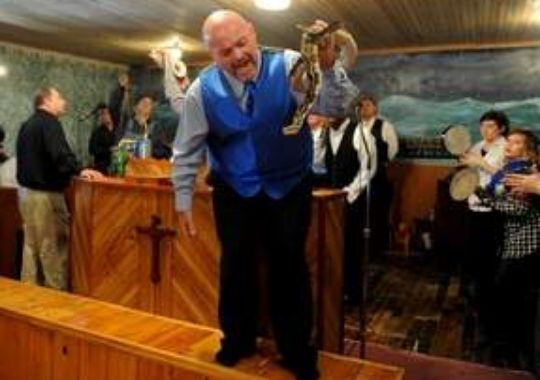 Yes, you can face-palm now, because what happens is rather inevitable.

I’ve blogged about this before, and am now returning once again because yet another death has just taken place. As reported by WBIR …

Kentucky Pastor Jamie Coots died Saturday night after he was bitten by a snake, according to Middlesboro Police Chief Jeff Sharpe.

Coots starred on “Snake Salvation” alongside Pastor Andrew Hamblin, from LaFollette, who was recently in court for TWRA citations for snake-handling. The National Geographic show profiled the Pentecostal, serpent handling preachers.

Chief Sharpe said Coots was found dead in his home at about 10 p.m. Saturday after a snake allegedly bit Coots while he was handling the animal in his Middlesboro church, Full Gospel Tabernacle in Jesus Name.

You would think that at this point a bit of common sense would have kicked in, but alas no, common sense is in such short supply that I guess it is akin to a super-power. So here is what happens next …

Coots went home before emergency workers got to the church. Officials then went to his house and urged Coots to get medical care, but he refused. About an hour later they said he died.

Believing crazy things that are not actually true is not simply a quaint eccentricity, it can and does often have tragic consequences.

Oh yes, one further observation, as mentioned previously, this entire ludicrous fiasco is based upon verses 17-18 within Chapter 16 of Mark’s gospel. The true kicker here is that these verses were not in the original manuscripts, that ended at verse 8. Verses 9 through to 20 were added in later in the 2nd century long after the original version.

1 thought on ““they will pick up snakes” … and get bitten and killed.”