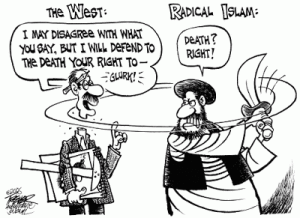 Kashif Chaudhry, an Ahmadiyya Muslim and also a doctor, has blogged a posting within the express tribune in which he disagrees with Sam Harris and also Bill Maher – translation – religious guy disagrees with vocal criticism of religious beliefs, and so this should not be a surprise, but there is a bit more to it than that.

First a bit of context. The Ahmadiyya are a fringe islamic belief, and because they are not mainstream Islam and have another prophet, they are deemed to be heretics by about 99.9% of Muslims on the planet. What is of course rather dire is that they are openly discriminated against in Pakistan and suffer a lot of violence. What is truly praiseworthy is that they are totally non-violent and strongly adhere to that stance, but it is still a belief that asserts supernatural claims for which there is no objective evidence.

So what is the argument within Mr Chaudhry’s posting?

Academically speaking, Islam is defined by the Quran and the Sunnah, the practice of Prophet Muhammad (pbuh). It is not defined by what the ISIS or some ‘Muslim government’ endorses. Nor is it defined by what 64% of Egyptian Muslims (compared to the 2% of Bosnian and Turkish Muslims that agree with apostasy laws) think. Regrettably, Maher and Harris judge Islam by the latter standard. And this is where they go wrong.

While some might indeed agree with that, the truth is that it is simply not factually correct.

So who gets to define Islam?

Basically nobody and everybody. The term “Islam” is simply a word that describes a vast diversity of conflicting human belief focused around Mohammed, there is no such thing as “true” Islam, but instead there exists rather a lot of diversity and almost no consensus.

If you think you can define Islam by listing some common beliefs, then I guarantee that I will find Muslims who do not believe that. For example

No matter what you put on the list, there will always be exceptions, and so can we then label those that do not conform to a specific list as non-Muslim or nominal, or not extreme? We can’t because there is simply no standard that anybody would agree upon, so if somebody standing in front of you declares themselves to be Muslim while eating a ham sandwich and holding a glass of whisky, then who are we to challenge this to any degree at all. I have in fact had that exact experience.

OK, so here is the point Mr Chaudhry build up to …

To make my point, let us test Maher and Harris on the issue that was central to that heated debate on Maher’s show.

Maher alleges that Islam is the only religion that kills you for disagreeing with it or for leaving it. In other words, he singles out Islam for endorsing the apostasy laws. Harris agrees with Maher and further adds that Muslims, like me, who reject apostasy laws are “nominal Muslims” who “do not take Islam seriously.”

In my detailed debate, with a fellow new atheist on this issue of the apostasy laws, I show how extreme anti-Islam critics and extremist Muslims hold the same flawed narrative on Islam. On the contrary, the Quran and Sunnah and the majority “moderate” Muslims stand on the other side.

In other words, what he is saying is that “they”, the supposed tiny majority are violent and that the vast majority are non-violent. Once again this is simply not factually true at all.

There is much more, I blogged about the myth that only a tiny minority are extremists here.

While most do not act on such ideas, rather a lot do embrace these very bad ideas as “truth”, and so there is nothing “extreme” in pointing out this easily independently verifiable fact, nor is it a “flawed” narrative.

It is perhaps like this, not just because some promote bad ideas, but also because the quran itself is awash with some very violent rhetoric …

If you stripped out the word “disbeliever”, “jew” and “christian” in the above, and replaced those words with the word “Muslim”, it would then be deemed hate speech, and yet because it is in the quran and is believed by millions, it is granted a free pass.

The typical response will be, oh but you have not understood, that really means …. and before we go any further, I should point out that those that take that line need to have that discussion with the tens of millions who do embrace such words as literal “truth”, and not those of us who point out that these are bad ideas that merit criticism.

The line that Mr Chaudhry goes on to promote is this …

I strongly believe that Harris and Maher have all the right to criticise Islam. However, projecting the extremists as true Muslims and rejecting us reformers as “nominal” amounts to bigotry and bias.

And that is complete nonsense, because neither Harris, nor Maher have ever taken a stance about any specific violent or non-violent strand of Islam either being “true” Islam or “nominal” Islam, they have instead simply criticised the vast swathes of rather bad ideas that are embraced as “truth”, and not just because such ideas are not actually true at all, but more importantly because such ideas have inspired rather a lot of abhorrent behaviour.

Perhaps Mr Chaudhry should pause and consider the thought that both Mr Harris and also Mr Maher are in fact on his side here, the vast majority of the “moderate” Muslims in Pakistan are vigorously opposed to the very existence of Ahmadiyya Muslims and often strike out violently against them and also discriminate against them in daily life. The one common aspect that Mr Chaudhry, Mr Harris and also Mr Maher all share is that they criticise that, and yet strangely enough Mr Chaudhry appears to be far more interested in attacking (verbally) those who would in fact defend him and his right to believe whatever he wishes to believe.