There has been a bit of a fuss recently because the UK’s NUS (National Union of Students) refused to condemn ISIS.

So here it how it played out …

You can read about it in the UK’s Independent …

The Union’s National Executive council (NEC) refused to pass a motion criticising the terror group, which has enslaved women and displaced or killed tens of thousands of people, in its most recent meeting. It comes shortly after the NEC passed a motion to boycott Israel entirely, despite warnings it could alienate Jewish students.

A spokesperson for the NUS said in a statement:

At our most recent NEC meeting, a motion on this issue was presented and voted on by all members. Some committee members felt that the wording of the motion being presented would unfairly demonise all Muslims rather than solely the group of people it set out to rightfully condemn.

The claim that they did not wish to hurt the religious feelings of one specific group is revealed to be more than a tad odd when you consider the fact that they will indeed happily condemn other things such as UKIP or Israel.

To sum that up,  here is a chart that will help … 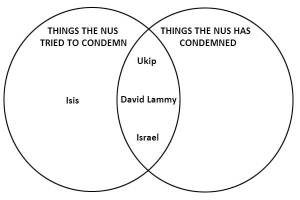 Should we really care?

Perhaps not, because the NUS are not really relevant at all. In fact, I’d go a bit further and state that they do no represent the views of the students that they claim to represent. The TAB (a news site for students based in the UK) reported the story and ran a poll in which they presented the motion and asked their readers to indicate how they would have voted, here are the results …

So why do people join NUS?

Basically one reason only, the discount card, but hey there are alternatives such as MyUnidays.com. Then again I suspect most pay the £12 to NUS and then milk them for all the benefits while at the same time laugh at the lunacy of their “leadership”.

One can only wonder at the pure crazy at play here. The vast majority of Muslim students in the UK have been openly and repeatedly standing up and telling anybody who will listen that they don’t like ISIS, that ISIS does not represent them, and that they don’t want to be associated with ISIS in any way – so how exactly is not condemning ISIS helping anybody, except perhaps by inadvertently supporting ISIS.

One can only gasp in awe at the observation that NUS spend so much time debating issues of no relevance to students, such as UKIP, Israel and ISIS that they end up having almost no time left to work on the things that truly do matter to their membership such as student fees and student housing.

So what can one say except to perhaps observe that for NUS being irrelevant is the new relevant.