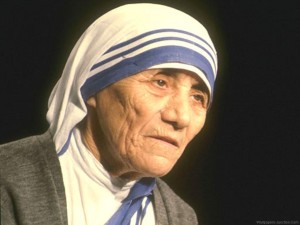 Catholic PR machinery would have you believe that they hold the moral high-ground and retain the final word on what is right and wrong. This is perhaps one aspect of their claim that is testable (No, I’m not about to start banging on about Child Abuse, we can have that discussion another day).

If we think back in recent times, whom would you think to be the most saintly, devout, and godly (most Catholic) individual you can think of? I’d like to suggest that perhaps Mother Teresa would be top of many lists, so on that basis let’s take a closer look at her life and see if she truly was a saint as is now being claimed by some.

Mother Teresa is perhaps in some respects the most well-known nun on the planet, primarily because she is reputed to have selflessly devoted her entire life from a young age to serving the poor, the sick, and the dying, within the slums of Calcutta. So how much of this is fact and how much is simply religious propaganda?

Christopher Hitchens, the rather sadly missed British Journalist, wrote a well-researched book, “The Missionary Position”, which exposed her as a religious fanatic with no real interest in actually helping the poor. Because he visited her clinic in Calcutta and also personally interviewed her, he was in the unique position of having direct knowledge of what was really going on and gained a deep understanding of what she truly believed. Here is a quick summary of the key observations that he makes.

1) Not a Friend of the Poor

She was not at all a friend of the poor, but was instead a friend of poverty. That might appear to be a subtle distinction, but it is a rather important one. She believed that poverty was a gift from god and should be accepted and welcomed. The outcome of such thinking was that she was opposed to the one thing that is known to cure poverty, allowing woman control over their reproductive cycle. In other words, woman should be breeding machines and have as many babies as possible.

2) Her friends included the corrupt rich

Those with whom she was friends included the corrupt rich such as the Duvalier family in Haiti. She travelled all the way there to personally meet with them so that she could be given money. Note that this was not theirs to give, but had been stolen by this corrupt family from the poor of Haiti. In return she gave a public speech in which she praised the regime of this family of dictators.

She also accepted 1.4 million dollars of stolen money from Charles Keeting, founder of Lincoln Savings and Loan Association. In return she gave him public support and testimony at his trial saying what a great man he was. The District Attorney wrote to her and explained that the money had never belonged to him and that she should not keep it (she never replied).

3) Nobel prize for peace. Why?

When you accept your award cheque, you don’t just go and collect it, you are expected to give a speech that relates to the topic of your award. She gave the most bizarre dialogue in which she claimed that the main enemy of peace in the world was abortion.

4) Where did all the money go?

There have been enormous numbers of donations to her from decent people all around the world who truly believed she was helping the poor of Calcutta. Mr Hitchens personally visited her clinic in Calcutta and describes it as a dump and not a clinic at all. “It is an ill lit place where the poorest of the poor are dragged in off the street to die.”

With the money she got she could at least have started a big teaching hospital, so where did the millions go?

She used it all to build more than 150 convents all around the world  in her own name, perhaps hoping to have an order of nuns named after her.

Did those who gave know that it was for the propagation of fanatical Catholicism? I think not. Money has been taken under false pretences, there has been an outright fraud going on here.

More criticism from other sources

Is the Hitchens book the only negative side to this story? No, many others have been equally critical.  Colette Livermore, an ex nun from Mother Teresa’s order, writes quite critically about it within her book “Hope Endures: Leaving Mother Teresa, Losing Faith, and Searching for Meaning”.

As for the actual care on offer by her clinics, that has been heavily criticized by both the Lancet and also the British Medical Journal. Deploying staff who are not permitted to have any medical training, yet are still expected to care for the ill and dying does not yield a viable health-care solution.

Not as she is claimed to be at all

The assertion that she was a good person and did great things simply does not survive a review of the available evidence, and none of these facts have every been disputed.

Mother Theresa is believed to be a true saint and a friend of the poor, but was in fact the opposite and did nothing except prolong their misery and circumstances. Her devotion to the poor was nothing but a devotion to raising funds in order to propagate her own misguided beliefs. Any decent moral person given the opportunity of such funding would have had no hesitation in not only bringing relief to the poor, but would have also addressed the root causes and enabled these people to escape the trap they were in. It takes a truly perverse and wicked belief system to use such funds to keep the poor oppressed and in the gutter, and instead encourage them to embrace  poverty as a virtue.

Such fanatical devotion to nurturing and embracing poverty is not by any normal moral compass good or right. Nor is accepting money under the false pretence that it is for the relief of the poor. If this individual is an example of the ideal morality that Catholicism has to offer, then it needs to be seriously questioned that it is in any way moral at all.

One final observation – She did not actually believe

She claimed that she had an unquestioned faith, yet that was a complete lie.

In a new book that compiles letters she wrote to friends, superiors and confessors, her doubts are obvious.

“Where is my faith?” she wrote. “Even deep down… there is nothing but emptiness and darkness… If there be God — please forgive me.”

Eight years later, she was still looking to reclaim her lost faith.

“Such deep longing for God… Repulsed, empty, no faith, no love, no zeal,” she said.

As her fame increased, her faith refused to return. Her smile, she said, was a mask.

According to her letters, Mother Teresa died with her doubts. She had even stopped praying.

Because she operated within living memory we are able to conduct a proper review of the facts. As a result, the mythology surrounding this modern so-called saint is revealed to be complete nonsense.

So what about all the other supposed religious saints back through all the ages including Jesus himself. It strongly suggests that most of the information we are given is pure religious mythology and does not in any way relate to who these people really were, what they actually did, what truly motivated them, or what they actually believed.