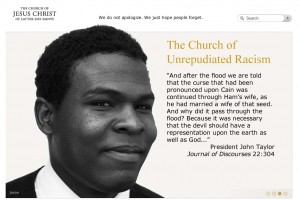 Tresa Edmunds writes a rather interesting article in the Guardian all about Racism within the Mormon church, she basically explains that they have now come clean and admitted they got it all wrong …

The Church of Jesus Christ of Latter Day Saints announced the publication of a new edition of the scriptures on 1 March. What matters here are the changes made to several headings introducing the text. The changes to Official Declaration 2 – the section lifting the priesthood ban for black men – have implications that are staggering.

So, on 1st March (yes only seven fracking days ago in 2013) the Mormon church has finally worked out that being racist bigots was not right. Well OK, that is not strictly true, most of them are  still racists.

Can they change their holy book like this? Apparently yes, because the bits they have changed are not the bits deemed “holy” but are simply bits added in as guidance around the “holy” bits.

What comes to light is the claim that they did once ordain a non-white a very long time ago, but that was quickly dropped and the racist beliefs then persisted until the ban on non-whites was lifted about thirty years ago in 1978. Yet, even with the lifting of that ban, the racism still persisted.

Now, I should perhaps also explain that the author of the article, Tresa Edmunds, is herself a Mormon, she writes about faith and feminism under the name Reese Dixon at Feminist Mormon Housewives, so she will be a tad biased here and rather eager to give all this a bit of a Mormon whitewash (“what, us racist!, gosh no”). You can see this when she writes …

Even the recent Broadway musical Book of Mormon alludes to this with the statement that “In 1978 God changed his mind about black people”.”

Historians and scholars have known very well that it wasn’t God who changed his mind about black people, it was church leadership.

Really! … what scholars, exactly which historians, and how exactly did these historians determine what a god did or did not say? She also observes …

It would be surprising for any organisation in this day and age to admit to racism.

It would indeed, but I’m not suggesting they would lie, but rather that the belief itself would blind them to the racism that still prevails.

The problem with her article is that it brushes over a few rather inconvenient truths — that the racist beliefs do indeed still persist and prevail within their culture, it is not simply a few past leaders getting it a bit wrong, the core of the Mormon belief is itself embedded with racism. The New York Times spelled out the problem in an article published last year …

In a June 1978 letter, the first presidency of the Church of Jesus Christ of Latter-day Saints proclaimed that “all worthy male members of the Church may be ordained to the priesthood without regard for race or color.” Men of African descent could now hold the priesthood, the power and authority exercised by all male members of the church in good standing. Such a statement was necessary, because until then, blacks were relegated to a very second-class status within the church.

The revelation may have lifted the ban, but it neither repudiated it nor apologized for it. “It doesn’t make a particle of difference,” proclaimed the Mormon apostle Bruce R. McConkie a few months later, “what anybody ever said about the Negro matter before the first day of June of this year, 1978.”

Mr. McConkie meant such words to encourage Mormons to embrace the new revelation, and he may have solemnly believed that it made the history of the priesthood ban irrelevant. But to many others around the country, statements of former church leaders about “the Negro matter” do, in fact, matter a great deal.

They cause pain to church members of African descent, provide cover for repugnant views and make the church an easy target for criticism and satire.

To be honest, this racism is the least of their worries, they also believe a lot of other truly weird stuff (we can all become gods and each of us can have our very own planet, Native Americans are the descendants of the Lamanites spoken of in the Book of Mormon, Magic underwear, Magic glasses, etc..), all stuff that has exactly zero evidence. When you bypass all critical thinking and buy into weird ideas, it should be no surprise to discover that some truly obnoxious ideas are also given a bit of a free pass.

Mormonism was born in an age when slavery and racism was still considered to be a jolly good idea, so all this illustrates that it was very much a product of that time. If the Mormon belief was indeed truly going to continue to prevail then it would need to adapt and change in order to survive, and that change is exactly what we observe taking place.

In a generation or two, those that still retain the belief will perhaps reflect this change and will perhaps no longer be so overtly racist. Nice as it might be to dream about them having a truly reformed view as regards race, you still need to remember that any such change does not in any way address the core problem, they will still be embracing a cart load of truly wacky beliefs, none of which have even one jot of evidence to support them.

1 thought on “Mormons and Racism”