In an appearance that was filmed and posted online [No, I’ll not post the video here], a gang of religious thugs paraded a severed head before a crowd in Aleppo. They triumphantly described the execution of what they said was a member of an Iraqi Shia militia fighting for President Bashar al-Assad.

The Telegraph explains what actually happened …

ISIS fighters misunderstood comments Mr Fares made referring to the Imams Ali and Hussein, the founding fathers of Shiism.

Wounded and in pain he apparently started muttering things, and those around misunderstood what was been said, so concluded that he was from the other side and instantly there on the spot decided to behead him.

The Islamist rebels asked for “understanding and forgiveness” for cutting off and putting on display the wrong man’s head.

Ah, so they have apologized, so that makes it all OK then … right? 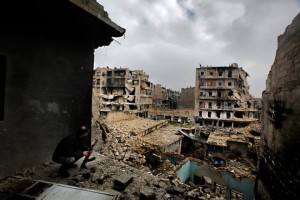 In many ways none of this is a surprise, this is the same group that overheard a 15 year old boy say something that they considered to be blasphemy, so they executed him. That also was a misunderstanding as well. On that occasion the boy worked on a coffee stall and when asked for a coffee on credit he promptly replied that he wouldn’t give out coffee on credit “even if (Mohammad) comes back to life.”. This is a saying that is a common phrase used by Syrians, but these ISIS lunatics misunderstood and promptly executed him for blasphemy.

Let’s be very clear about something here – the Assad regime is quite frankly abhorrent and have a well-documented list of human rights violations to answer for, but the alternative, these ISIS rebels are many times worse and are nothing more than brutal thugs of the worst kind – they are ‘inspired’ by a fanatical belief that motivates them to start lopping off heads or murdering children without any remorse and are loyal to only one thing … delusional Islamic dogma.

It is also a lot more complicated than just ISIS and Assad, there are in fact many different factions at play here …

The businessman and the smuggler sat down beside him, and a lunch of boiled potatoes in watery soup and rice was served. The lieutenant ate in silence and turned back to his iPad before finally addressing his two friends.

“I am now in an impossible situation. The army is ahead of me and they are surrounding from behind.”

“They” were the al-Qaida-linked group Islamic State of Iraq and al-Sham (Isis), which is directly linked to the main al-Qaida group in Iraq.

Recognised as a ferocious fighting force, it has also won a reputation for efficiency and governance in the areas it runs – a fact reflected in a name locals use for the faction: Dawla – the Arabic word for “the state”.

“I can’t defeat them and the army. I am about to collapse. I can hold out for a month or two at most. Isis are expanding in a fearful way.”

He described how Isis gained territory by co-opting local rebel battalions, then replacing them with more loyal jihadi units. “I tell other commanders: ‘Let’s make a deal, let’s unite against the jihadis. If we take over the northern border strip we can strangle them.” He flashed a bitter smile before continuing: “But we can’t even decide to unite against Bashar – how can we unite against Islamists?”

… The businessman was heading out to arrange a truce with a local jihadi commander. “The collision with them is already happening, but I need time to get support. You can’t stop their project but you can reduce the harm: instead of fighting all the jihadis, we’ll fight just a couple of factions,” he said.

Repugnant as Assad is, arming and supporting any of the various factions of rebels is really not a good idea. The people we should be wholeheartedly supporting are those caught up in the middle of this mess. An entire nation state has been shattered and fragmented leaving millions languishing in refugee camps – those are the people we need to be actively supporting because they are the ones who will need to pick up the pieces and put it all back together again one day.