If you dig into the statistics concerning Islamic terrorism then what you find are some surprising facts.

First, let’s start with the hopefully obvious observation. Almost every single day news reaches us of yet another barbaric atrocity that has been inspired and motivated by Islam. What should of course be immediately clear is that such actions do not in any way represent the vast majority of Muslims who number about 1.6 billion (about 23% of the human population on the planet). Most simply wish to live in peace with those around them and have no desire to cause anybody any harm. Islam, like most beliefs, is highly fragmented and contains many stands of conflicting ideas, some of which are violent, and most of which are not.

We have some facts to work with because a preliminary report has been issued by scientists at the University of Maryland at College Park working at the National Consortium for the Study of Terrorism and Responses to Terrorism, and so extracting a few nuggets from that report (pdf) we find the following …

Dr. Michael Shermer has a rather interesting chart within a recent article that surprised me. The following graph was generated from the Global Terrorism Database by typing in the keyword “Islam” … 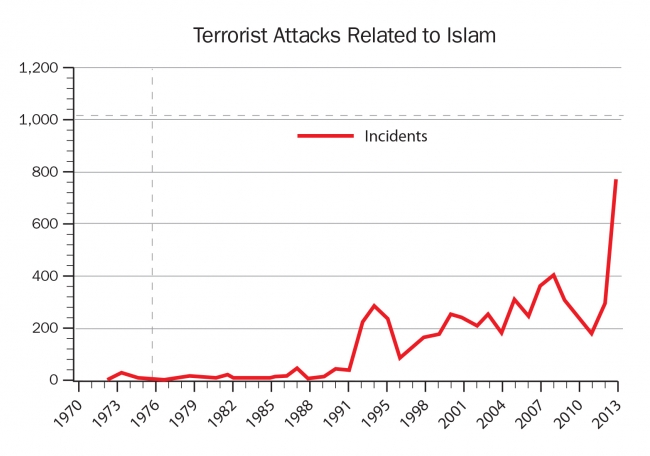 Yikes, what is happening, why is it like this?

There appears to have been a rise of a more conservative radical form of Islam, one that promotes a literal interpretation of the words contained within the Quran. As Dr Shermer points out …

A 2009 Pew study found these percentages of Muslims who say suicide attacks against civilians in defense of Islam are justified: 43% of Nigerian Muslims, 38% of Lebanese Muslims, 15% of Egyptian Muslims, 13% of Indonesian Muslims, and 12% of Jordanian Muslims. A 2006 study found that nearly a quarter of British Muslims believe that the 7/7 terrorist attacks on London in 2005 were justified, and 28% said they hoped that one day the U.K. would become a fundamentalist Islamic state.

In my own mind, the free flow of petrol-dollars has enabled the stricter far-more conservative form of Islam that prevails in Saudi Arabia (Wahhabism) to be propagated, and while this variation of thinking is not itself directly violent, it is a variation that promotes strict intolerance and a literal interpretation of the Quran. This mode of thinking has crept out and spread across the Islamic world and now acts as an incubator for the radicalisation of those that are susceptible.

The thought that this ideology can be tackled by better security, or bombing such radicals when they gain power is quite frankly delusional, the issue is not simply a few who actually turn violent, but also the many who wish no harm to anybody, but do embrace bad ideas that nurture such thinking and creates a safe haven for the radicals to flourish within. The only real solution is to attack bad ideas with far better ideas, and to also directly attack the absurd belief that a 7th century text was authored by a god and that every literal word is beyond criticism.

Any human who wishes to act in a specific way should be expected to be able to justify such actions using reason. If what is proposed is at odds with basic human decency and conflicts with our empathy for others, and the only justification available is to point at some ancient text, then clearly this becomes a recipe for violence to prevail, and so it is this idea, the thought that some ancient text should take precedence over everything else that needs to be robustly challenged.

There are other ideas that the polls revealed to be popular …

… these are also ideas that needs to be labelled bullshit, not just by those outside Islam, but also by those within and it needs to become part of the popular mode of thinking in all minds, not just a few reformers. Do that, and you are well down the road to pulling the rug from under the feet of those that turn to violence.

This is not an easy task, and so those that speak up like this within the Islamic community need to be cherished, nurtured and encouraged.