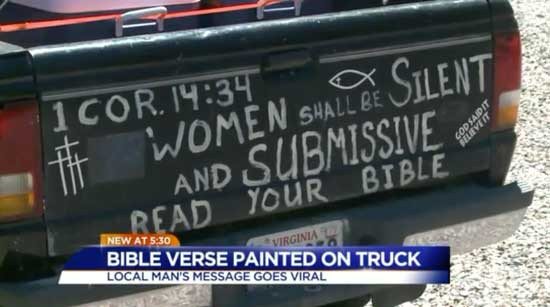 Getting into somebody’s face and telling them that they are being a F***ing idiot and that they are doing/believing something very stupid is highly effective. This consistently works every time, they always step back and comment, “Yep, you are right“, and then immediately change their position.

You have seen that happen all the time … right?

So lets take a look at one example that made the news recently.

With a hat tip to Hemant Mehta for this example, pictured above is a truck that is driven by Tom Hicks in Virginia.

As you might imagine, the immediate reaction of many drivers seeing this message in front of them on the highway is “WTF”, and some even happily give Mr Hicks the finger.

“The reason I put this particular message on, I want people to read the Bible, I want them to see this message and say is that true,” he said.

“Right now I don’t believe there’s a God so I guess you would say I’m an Atheist,” he said.

“[The Bible is] a hateful, hateful piece of work which Christians try to turn around and they talk about love,” he added.

In other words, he is not promoting a specific belief, but is instead promoting disbelief by highlighting one specific verse that not many people today would consider to be noble and praiseworthy.

There is a Problem here

Mr Hicks is correct of course, there is rather a lot of archaic nonsense within the Bible. There are good reasons to pause and think critically instead of simply accepting that every word as divinely inspired truth.

Consider the entire range of people he will encounter and what actually happens when they are faced with his sign?

Those that don’t actually believe at all, see an extreme bible thumper and give him the finger as they drive past. Those that do truly believe and embrace the text as the ultimate guide will simply rationalise it all away. That is quite literally what happened when the TV station asked a pastor for his thoughts. He commented …

“The very person who wrote that passage of scripture in Corinthians, also wrote in Ephesians that husbands are to love their wives just as Christ loved the church, which is an unconditional love, and it’s a sacrificial love,” [Mt. Pleasant Baptist Church Pastor Joel]

Nobody is being convinced of anything, and instead rather a lot of people on both sides of the debate are being ticked off. The fundamental problem is that this in-you-face approach simply does not work.

Most Religious Texts are like this, its not just the bible

Pick any religious text that is highly regarded and revered as a revelation and you will discover both nice things and also some truly obnoxious things. Point out the obnoxious bits to those that embrace it all as “truth” and something interesting happens, you will be find that one of more of the following pops up …

It tends to be like this because we generally inherit our beliefs from our culture and accept them without question. Humans often believe, not because they have actually researched it or given it much thought, nor because it is true, but because it offers some form of emotional support. If something threatens that, then we simply rationalise the challenge away.

In religion and politics people’s beliefs and convictions are in almost every case gotten at second-hand, and without examination, from authorities who have not themselves examined the questions at issue but have taken them at second-hand from other non-examiners, whose opinions about them were not worth a brass farthing.
– Autobiographical dictation, 10 July 1908. Published in Autobiography of Mark Twain, Volume 3 (University of California Press, 2015)

Most people who do generally believe to some degree are probably not aware of such verses, and so when confronted with them they perceive it to be a personal attack and not an invitation to critically analyse things. They might not have a rebuttal to hand, but they will be sure of one specific thing – you are wrong – and so even if they do not have an answer, nothing actually changes.

Tempers might flare, and people may even become quite upset with you.

So what is a good way to communicate?

Don’t be obnoxious, and don’t get in people’s faces to start pointing fingers and telling them how wrong they are. You are under no obligation to engage at all and so politely declining to even engage is an option if they get in your face and try to tell you what to believe. If curiosity does arise, don’t make statements, but instead ask polite questions that gently nudge people into thinking about things more analytically …

So what leads you to that conclusion?

How confident are you this this is really true?

How do you know that, how can you demonstrate this this is really true?

In other words, life is short, and also far richer if you opt to not fill it with pointless arguments that will not actually convince anybody of anything. If people are going to change their minds then they need to work it out themselves.

So here are four words to perhaps sum it all up – Don’t be a dick.