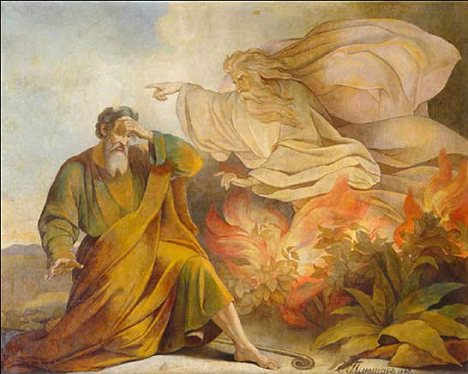 Belief in God sounds like a simple question to address, and is one that you would expect is well understood. Simply conduct a poll, and if concerned about people being pressured by friends or relatives, then make it anonymous. That should yield a reasonable answer … right?

There are of course polls like this that are run on a regular basis.

Both Pew and also of course Gallup have been asking such questions over the years and publish statistics that are quite similar. The results are that roughly about 89% of the US population believes that there is a God, and that number has been slowly shrinking. In 1944 when they asked such questions about 96% said they believed. They have also experimented with alternative words such as “universal spirit” and discovered that introducing wiggle room like this does not really change the numbers.

So do we have accurate numbers?

Side Note: Put aside all questions regarding the truth or not of the vast diversity of beliefs. This is simply about the things that people believe, or to be more precise, the numbers ion those that do not believe.

Two psychologists named Will Gervais and Maxine Najle from the University of Kentucky have been pondering over issues within such numbers and have also been attempting to work out how to overcome them.

The issue is this, non-belief is heavily stigmatised. People, for social and cultural reasons, would often hear a question such as “Do you believe in God?” and interpret it as follows “Yes, I’m a good person”.

For psychologists Religion is clearly a core aspect of human nature, yet a comprehensive understanding of it must also accommodate religious disbelief. If we don’t truly understand disbelief, then how can we possibly understand belief.

The problem with any statistics via Pew and Gallup is that it is all self-reported and so it comes with rather a lot of social baggage that will naturally skew the actual numbers.

Is this correct, are there reasonable grounds for suspecting that there is a social bias in play?

If you ask, “Are you an Atheist?“, only about 3% will confirm that. If you ask “Do you believe in a god or universal spirit?” then about 10% will say “no”. Both are the exact same thing, an Atheist is simply somebody who does not believe in a God, that is the entire scope of it, yet how you phrase the issue yields a rather large statistical variation, and so this clearly illustrates that there are huge social biases in play.

So how do you actually address this, how do you get people to honestly answer the question without asking the question directly? They tackled this by deploying an indirect way known as the “general indirect measure methodology”.

OK, so they used a representative sample of people provided by YouGov. The participants were randomly presented with one of three options. One was a standard Gallup poll question. The second was a list in which they simply count how many items are true, and the third was once again a list, but included one additional item – a statement about God. Here are all three options … 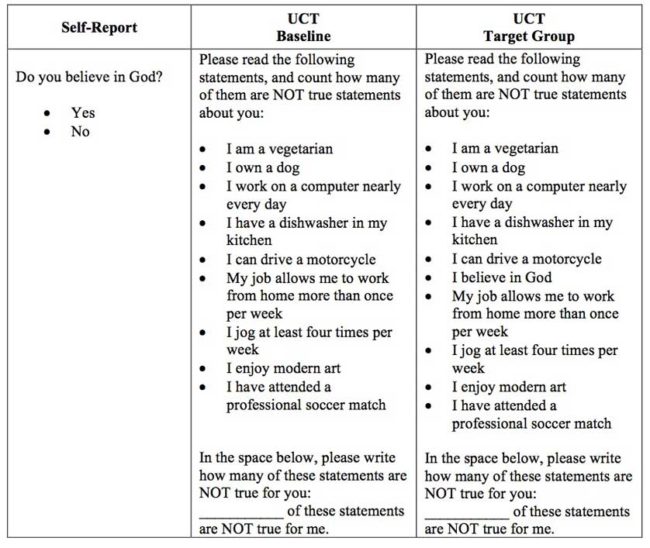 Notice that the lists are innocuous statements such as “I am a vegetarian” and “I own a dog”, and that the third list includes the socially sensitive item “I believe in God”. The idea is that people are not being asked this question directly, and so by comparing the numbers obtained, it become possible to gauge what people really believe to some degree without triggering the social bias.

It’s not perfect and clearly there is a wide margin for error, so they ran a second sample, but adjusted things so that they had three lists, one was just vanilla, one with a negative god question, and one with a mathematical impossibility as follows. This then enabled them to compare counts against previous answers to see what variances pop up … 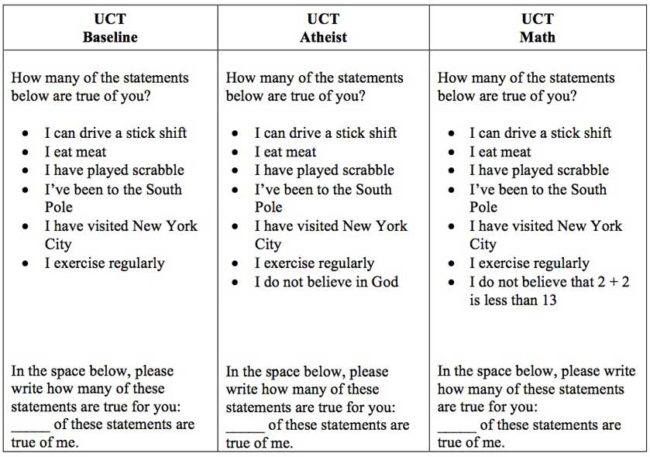 Our aggregate analysis, pooling across samples, provided an indirect atheism prevalence rate of 26%

Wow, that is a lot higher that the standard self-reported polls by Pew and Gallup. They go on to comment …

It would appear to suggest that there are indeed quite a few people out there who do not actually believe, but basically keep it a secret and do not reveal that fact even within an anonymous survey.

This is perhaps both understandable and also credible. What we know from other sources such as the Clergy Project is that there are religious leaders trapped and find that while they no longer believe, they can’t be open about this. It should be no surprise to find many others are in a similar situation. They do not believe, and yet because those around then such as parents, children, spouse, or just their immediate social circle, expect and anticipate a religious persona, they take the path of least hassle and maintain a religious facade.

Remember that one of the lists contained this question – “I do not believe that 2 + 2 is less than 13.”

34% of their participants agreed.

OK, so it is a confusing question and might indeed befuddle a few, but it does tend to challenge just how reliable their stated percentages actually are. To be wholly fair, they do highlight this and discuss it within their paper as follows  …

Without a doubt, this is our most damning result (cf. Vazire, 2016). It may reflect any combination of genuine innumeracy, incomprehension of an oddly phrased item, participant inattentiveness or jesting, sampling error, or a genuine flaw in the unmatched count technique. Fortunately, we were also able to assess validity in a second way. In Sample II, the unmatched count to generated an atheist prevalence estimate of almost exactly 100% among self-described atheists, but only 13% among all other religious identifications. It is unlikely that a genuinely invalid method would track self-reported atheism this precisely.

They should indeed be applauded for their distinct honesty here. They reported exactly what they found even when it makes no sense and does not align with their hypothesis.

What they have does indeed lend credence to the reality of social pressures skewing the numbers. While the reality of people keeping their non-belief hidden is quite real, the vastly increased percentages they report can perhaps be taken with a grain or two of salt.

Their paper can be downloaded from here for free.