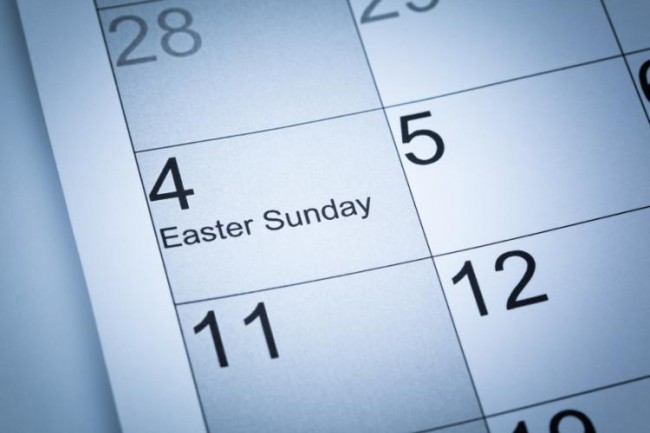 The specific dates for Easter have always been a bit of a mystery to most, and I don’t just mean the non-religious, but rather everybody including the most devoutly religious. Ask and at best you will be advised that it has something to do with the moon, but beyond that … no details.

So how is the specific weekend for Easter calculated and why is it like this?

The popular consensus that emerged is that it is the first Sunday after the ecclesiastical full moon that occurs on or soonest after 21 March. Er .. the what full moon, run that past me again. Well here is where things become rather odd (as if they were not already weird). These medieval lunar calendars can and do get out of step with what the moon is actually doing because, well the maths was not exactly spot on, oh and this also is one of the big red flags that motivated them to switch to the Gregorian calendar. This abstract ecclesiastical calendar, is now (using the Gregorian calendar) more or less back in sync with the moon, sort of … because remember that the specific movements of the moon will vary depending upon where exactly you are on the planet looking at it from, and so having this abstract lunar calendar solves that location problem.

Now just to make things even stranger, we have an east west split. This is very much rooted in there being two calendars – the Gregorian calendar which was introduced in 1582 to fix the rather obviously broken Julian calendar, so named because it was actually Julius Ceaser who introduced it in 46 BCE. The Gregorian brought in the badly needed 0.002% correction because the Julian was clearly getting out of sync with actual observations. What then happens is that the western church used 21st March under the new Gregorian calendar to calculate Easter and the eastern church stuck with 21st March under the older Julian calendar – net effect, Easter can be 4, 5 or even 34 days earlier in the west than in the east.

So in summary, we know that it will fall sometime between 22 March and 25 April … but as for the precise date, well that will very much depends upon your cultural heritage being either eastern orthodox or western catholic … and yes this year Easter in the east is 1st May. Wait a sec, they are supposed to be within the date range of 22 March to 25 April, so why 1st May. Back to that calendar thingie … since they calculate using the Julian calendar, their date under our Gregorian calendar ends up being 1st May.

Meanwhile the Jewish passover this year is yet another date (22nd April), and remember, Jesus is supposed to have been the ultimate passover lamb, so it might perhaps be argued that the prevailing consensus on what date to pick or how to even pick it to celebrate the ultimate passover lamb is wrong, and has been so for centuries. But then when it comes to calculating the Jewish passover, well that is also all a bit of a mess as well, but lets not go there for now.

Personally I’m not religious and so I don’t think I really care what date gets picked, I just enjoy having a long weekend in the spring, (it is a public holiday here in the UK), but I do confess that I am amused to observe the passion and religious devotion that gets poured out on what is most probably the wrong date, but then I guess most of those that do care about such religious festivals are not too bothered because by its very nature the religious experience has always been an emotional experience and not fact-based, so I guess having the wrong date does not bother them either.