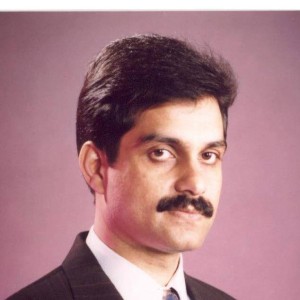 In yet another example that confirm’s Pakistan’s descent into complete and utter lunacy, Dr Mehdi Ali (pictured above), an American volunteer cardiologist was shot dead in Pakistan yesterday.

What happened, was this a robbery, or an act of random violence against a stranger?

No, this was a planned assassination. Dr Ali’s “crime” in the eyes of the thugs who brutally murdered him in front of his five year old son was that he embraced the wrong variation of Islam, he was an Ahmadi Muslim, a community that has renounced all violence and so can be murdered with impunity and without any fear of retaliation.

Mehdi Ali had taken his five-year-old son and a cousin to a graveyard in Punjab province at dawn to pray when he was shot, said Salim ud Din, a spokesman for the Ahmadi community.

“He came here just one or two days ago to work at our heart hospital, to serve humanity and for his country,” Din said. “Two persons came on motorbikes. They shot 11 bullets in him.”

Ali was born in Pakistan but moved abroad in 1996. He had returned to do voluntary work at a state-of-the-art heart hospital built by the Ahmadi community in the eastern town of Rabwah.

Ali, 51, moved to Columbus, Ohio, in the United States, where he founded an Ahmadi centre and raised funds for medical charities in Pakistan, Din said.

This is not a unique event …

Some mullahs promise that killing Ahmadis earns a place in heaven and give out leaflets listing their home addresses. Few attacks are ever solved even when the victims can identify their attackers.

Seven Ahmadis were killed and 16 survived attempted assassinations last year, according to an annual report produced by the Ahmadi community in Pakistan.

Others were driven from their homes or had businesses seized.

“This is a faith-based target killing of a very precious man who was saving humanity,” said Saleem-ud Din, an Ahmadi spokesman. “We want justice.”

It was the second year that Dr. Qamar had volunteered at the Tahir Heart Institute, a hospital specializing in cardiac treatment that is run by the Ahmadi community and treats patients of all faiths. In recent months, religious extremists distributed pamphlets in the area warning Muslims against using the hospital.

“Visiting a doctor or receiving treatment in that hospital is forbidden in Islam and an unforgivable sin,” said one such pamphlet. Mr. Din said the police and other law enforcement agencies had failed to act against those orchestrating the campaign.

The Ahmadi faith offends many orthodox Muslims for its veneration of Mirza Ghulam Ahmad, a 19th-century Punjabi cleric who Ahmadis believe was a prophet sent by God — in contradiction to the mainstream belief that the Prophet Muhammad was the final prophet.

Bowing to pressure from religious hard-liners in 1974, Zulfikar Ali Bhutto, Pakistan’s otherwise-secular prime minister, changed the Constitution to discriminate against Ahmadis, who are forbidden to describe themselves as Muslims. In recent years, extremist groups and lone vigilantes have violently attacked Ahmadis numerous times.

Discrimination and intolerance have become institutionalised within Pakistan, against not just the Ahmadi community, but also against all minorities, and so it is effectively open season against anybody who does not embrace exactly the right flavour of belief.

The degree of moral bankruptcy within the strand of Islamic thought that prevails is quite frankly astonishing, the idea that murder merits a “place in heaven” is by any measure utterly abhorrent, and yet the responsibility here rests not just with some religious thugs, but also with the state. In 1974, Pakistan’s parliament adopted a law declaring that the 2.5 million Ahmadis who live in Pakistan to be non-Muslims, and then a later law in 1984 Ordinance XX, banned Ahmadis from legally calling themselves Muslim. They are also barred by law from worshipping in non-Ahmadi mosques or public prayer rooms, performing the Muslim call to prayer, using the traditional Islamic greeting in public, publicly quoting from the Quran, preaching in public, seeking converts, or producing, publishing, and disseminating their religious materials.

There is also a rising tide of persecution and hate-related incidents, and so what happened yesterday is not simply one lone isolated crime, but rather is all part of a rising tide of state-sponsored religious cleansing within Pakistan.

1 thought on “Dr Murdered for simply having the wrong belief”