David Martin writes over in the Huff Po an article entitled “What Falls Between Agnostic and Atheist?” within which he is pondering what is the correct label that he should utilise to describe himself.

It’s interesting to pause and consider it because it gives me an excuse to mull over the use of such labels. What is odd about his article is that the words “atheist” and “agnostic” are not mutually exclusive terms, you can quite honestly use both concurrently.

Now you might be wondering how, and you may also be confused by my “divine toe” reference, well hang in there, I’ll get to that.

So what is Mr Martin is writing?

For most of my life, I have been a nonbeliever or at least a serious doubter.

But where do I fit on the non-religious spectrum between agnostic and atheist?

Now this is where I might quibble, because these are not the same thing (I really will get to that soon, I promise). He goes on to explain what he means …

There are, of course, lots of historical terms that folks like me can use to describe their belief system. There’s “skeptic”, “cynic” and “secular humanist.” Even the old negative labels like “heathen”, “heretic”, “pagan” and “infidel” could be adopted in today’s world with a kind of perverse pride. But I definitely wouldn’t go for “bright”, that annoying postmodern term adopted by supercilious nonbelievers.

.. and he concludes by offering a few new terms with tongue in cheek of course because he is not being serious…

Mehtheist
This is someone who is bored or uninterested with the concept of God. Rather than agonize continually about the question of God’s existence, the Mehtheist chooses to remain actively indifferent.

Antibaptist
Just as Anabaptists reject infant baptism, Antibaptists reject baptism in all its forms as well as any other religious practise. Not to be confused with Anti-papists or antipasto.

OK, so he is not being too serious here, but I still want to get my 2c worth in by correcting this idea that “Atheist” and “Agnostic” and mutually exclusive terms.

First all all, we have the term “atheist” – this is simply the dismissal of god claims, and is nothing more than a lack of belief. The spectrum is like this …

… and in there you will find all of humanity; individuals who have different degrees of certainty regarding what they do and do not believe. For example some might assert, “there is no god”, and others, the vast majority of non-believers, would perhaps take the position of “there is probably no god”. You can never be 100% certain about anything, and so the best you can do is take a position that acknowledges that probability. Right now the quantity of evidence that supports the theist position is exactly zero, and that is perhaps why they use the term “faith” which simply means pretending to know things that they do not actually know at all.

Now where does “agnostic” fit in, is that somewhere in the middle of all that? Nope, it is something completely different, and has its own distinctly separate spectrum like this …

So when It comes to a god claim, I can be both – I do not believe and also at the same time, I also do not know. 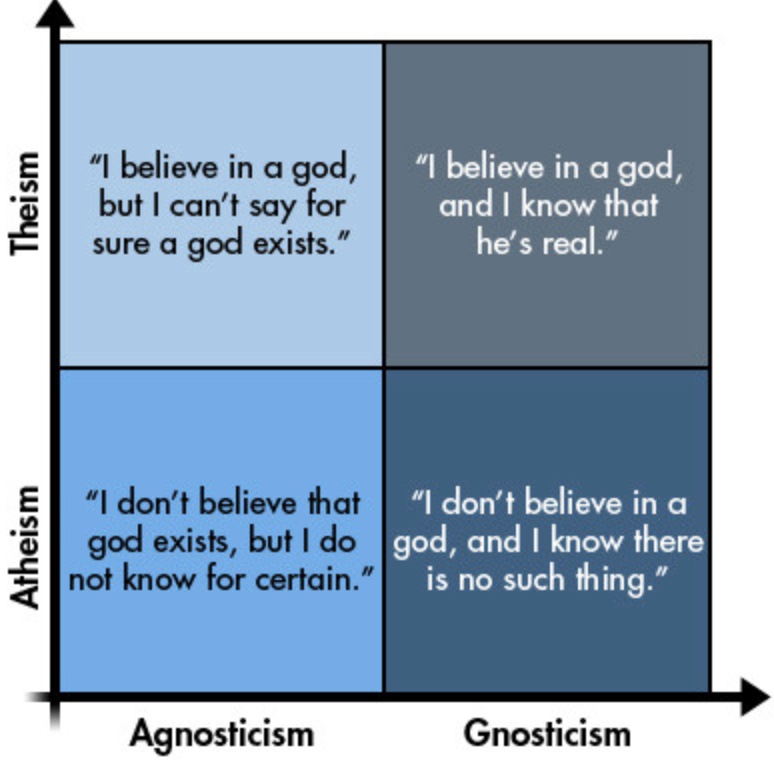 With a nod to the well-known reference, I do not believe that there is a teapot in orbit around the sun somewhere between Mars and Earth, not only is there is no evidence for that, but the proposal is also silly. At the same time, I also can’t prove that there is no teapot in orbit , and so I cannot state with 100% certainty that it is not there, I simply don’t know – I’m a teapot atheist and also a teapot agnostic, and I suspect you are as well.

So how exactly does having a little bit of belief work, do those who believe a little bit embrace the idea that there just might be a divine toe or perhaps even an entire foot, but as for the rest, nope, that’s nonsense.

What I’m suggesting is that belief/non-belief is almost akin to a binary condition.

It is all rather odd really