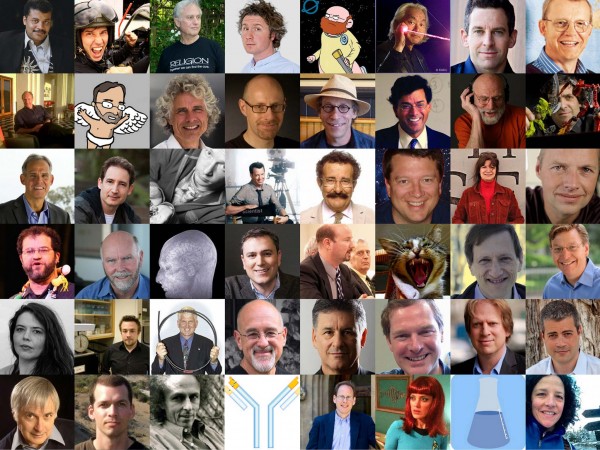 It can only ever be a subjective personal preference, and so when Science publishes a list of the Top 50 science stars on Twitter, I can’t help but ponder the thought – “how precisely do you measure that?”

It would appear that the way they have done it is to crowd-source the answer as follows:

Grab a list of everybody on twitter who works within a scientific context, then create a list with of the 50 who have the most followers and also add into the mix their academic citation counts to balance it out.

So who have we got?

But also a few unknowns (to me), and that’s good because I now have a few more to add.

Yes yes, I know, there are names that should be there but are missing, but that is the nature of such lists. The important point to note is that having such a list published in “Science” does not make it scientific, they simply started with the famous well-known names then padded it all out with other popular lists and finally ranked them using citations and followers, so you list of list of 50 popular and interesting people, but must certainly not the top 50, so don’t get hung up, it is simply a bit of fun.

Got any other lists?

Yes, and that perhaps betrays the bias of those that compiled the list, so in response to that observation here is a list of 80 really cool women scientists who are also active on twitter, and that list is from a blog on Nature. As I write this, my daughter just happens to be watching Number 3 on that list right now, and looking down that list, she has also met a few of them face-to-face.

Looking down the science list I find (to my delight) that I’ve personally met about a dozen of them face-to-face (but hey, my 14 year old daughter has met at least four of them fact to face), so perhaps I’m doing something right … or … perhaps they are simply popular well-known personalities who just happen to do science.