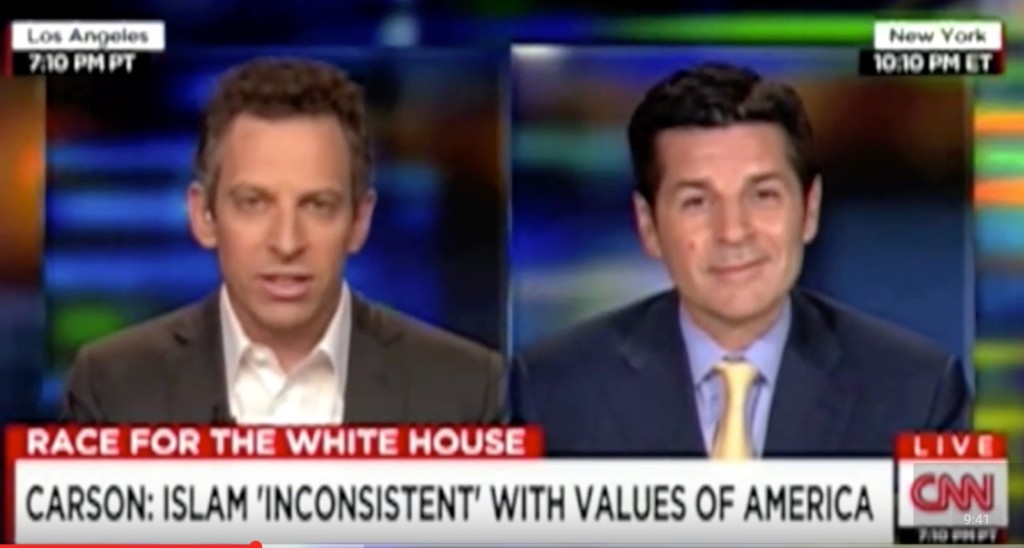 There was a recent discussion on CNN recently between Sam Harris and Islamic “moderate”, Dean Obeidallah. Here is that actual clip, it runs for about 10 minutes. The context is the prevailing issues regarding the very negative attitudes of many towards Islam, and of course this dialogue was triggered by Ben Carson’s declaration that a Muslim could never be president.

On the point that Carson is not a very thoughtful person (that’s putting it politely), they both agree, but then things go downhill after that …

Things are going well until Dean chips in with “Is that in the Quran?” Sam had been correctly pointing out some of the obnoxious things that “some” promote, and Dean’s defence is to claim that it is not in the Quran. He also labels Sam a bigot for simply criticising some of these bad Islamic ideas that motivate the bad behaviour.

Sam later blogged his thoughts on it all …

like Reza Aslan, Obeidallah seems almost compulsively dishonest. For instance, pay attention to the point in our exchange, beginning at 3:15, when I mention specific punishments under sharia—amputations for thieves and death for homosexuals. Obeidallah reflexively attempts to cloud the issue by denying that the Qur’an contains any mention of “throwing gays off of rooftops.” In response to this interruption, I can only insist that “it’s in the hadith, and you know it.” Is it possible that a Muslim who has been shilling for an organization like CAIR doesn’t actually understand the status of homosexuality under Islamic law? I don’t think so.

I recently encountered a very similar degree of public dishonesty. While debating I was advised that lots of Muslims have no problem with gays and so I should stop suggesting that Islam has a serious issue in that context. The truth is that the opinions of individuals who might hold an Islamic belief  is not the issue, the primary concern within that context is that the traditional stance right across almost every variation of Islam is extreme intolerance of gay people. Where they might differ is in how to respond … burning to death, stoning to death,  or dropping from a height … and I’m not exaggerating about that.

In the above CNN discussion the proposed defence of “Oh but its not in the Quran” is religious PR designed to deflect wholly valid criticism because along with the Quran come vast collections of Hadiths that give specific guidance and are adhered to by millions.

What if you took a Quran only stance?

Some do, they are called Quranists (and Heretics by most who deserve death), but if you toss out the Hadiths and just keep the Quran, then you have not really solved the problem at all, because that alone is a text that advises that I am a vile animal and should have my head chopped off for simply not believing …

That observation would then be the cue for, “Ah but you are not reading it correctly, that really means … “.

No stop there, the issue is not how I might read it, but rather is how millions of others do, and act upon it quite literally as a directive from a divine being, so if you wish to quibble about a specific interpretation then you need to engage and debate with them, not me.

So is Sam Harris an Islamophobic bigot?

The short answer is “no”, all he is guilty of is pointing out and criticising some of the truly bad ideas. He quite rightly makes the observation within the above video clip that Islam is a huge collection of different beliefs and ideas, some of which are truly abhorrent and result in some quite abhorrent behaviour.

It may also be worth pointing out that he has co-written his latest book with a Muslim, Maajid Nawaz, Islam and the Future of Tolerance: A Dialogue, and quite happily identifies Maajid as a chap that would make a fine president of the US – and having personally met Maajid myself several times, I agree, he would indeed.

1 thought on “Dialogues with “Moderate” Muslims”