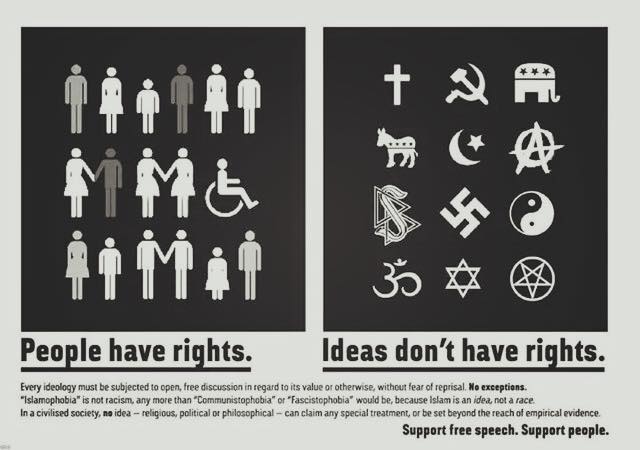 It was International Blasphemy Rights Day (30th Sept) a few days ago, and so it is perhaps appropriate to remember that the key point is not to offend, but rather to reject the meaningless concept of Blasphemy, a tool deployed by some to both oppress and to also enforce irrational dogma as “truth”.

So who gets to decide when a day is to be celebrated?

Nobody, there is no official body that decides such stuff as such, and so you simply declare it. If you then get enough traction it is rolling.

The Blasphemy day concept took off in 2009 when a student contacted the Center for Inquiry in Amherst, New York to present the idea, and because they liked the concept, they promoted it. Ronald Lindsay, the CFI CEO is quoted as saying during a CNN interview …

“religious beliefs should be subject to examination and criticism just as political beliefs are, but we have a taboo on religion”

… and there rests the problem, the idea that beliefs should not face scrutiny or criticism, and so we have a day to promote the idea that this cultural taboo needs to be challenged.

If you were to perhaps suggest that the most appropriate day is a day when people have been gunned down, attacked, or murdered for the supposed “crime” of blasphemy, then that would not in any way restrict you and leaves you with 365 days to choose from, so why 30th Sept? Well that just happens to be the day that a Danish Newspaper published the Mohammed cartoons and so it is indeed an appropriate day.

Ah, so this is really an Anti-Muslim Day?

Actually no, it is not, but rather is a very public stance against intolerance being deployed by any belief against others who might or might not be religious. A rather high-profile case that illustrates this rather well was the brutal murder of Salmaan Taseer, the governor of the province of Punjab in Pakistan. His supposed “crime” was that he opposed Pakistan’s blasphemy law. So what happened? The grinning thug Mumtaz Qadri, who gunned him down was hailed as a hero by more than five-hundred clerics and his supporters showered him with rose petals. Meanwhile, Salmaan, a decent human being lies in a pool of blood.

No, this is not about taking an anti-Muslim stance, Salmaan Taseer was of course a Muslim himself, it is about taking a stance against intolerance, oppression, and standing up for basic human rights.

Criticising bad ideas is wholly appropriate because the embrace of bad ideas inspires bad behaviour; “I’m Offended” or “We will kill you for saying that” does not now, and should never, trump that.