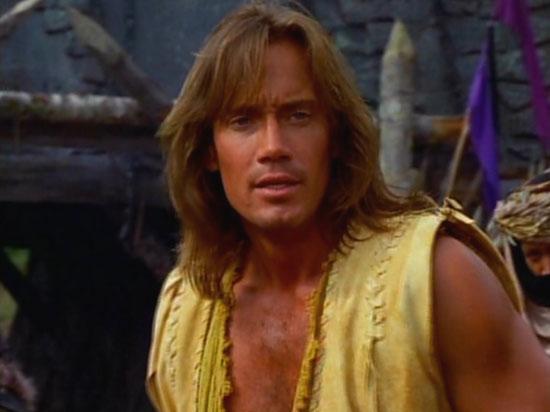 Yep, Mr Sorbo (pictured above in one of his acting roles) is once again off on one of his rants.

Least you wonder, the actor Kevin Sorbo, has been getting a bit of a reputation as a complete kook due to his recent spate of outbursts against people who dare to not actually believe in a god. You might in fact know him, his acting roles have included Hercules in Hercules: The Legendary Journeys, Captain Dylan Hunt in Andromeda, and Kull in Kull the Conqueror (yes, all of it was not exactly all that great). He also believes that Hollywood has limited his career because of his conservative political and Christian views … er, no Kevin, that’s not the reason, we have all seen the stuff you have done, and so have they.

What he is more recently famous for (or should that be infamous for), is his staring role in “God’s Not Dead“, a movie that the critics totally panned, but was apparently embraced by lots of Christians. I can only speculate that they either love the echo-chamber effect, or quite enjoy acting and a plot that is reminiscent of a sturdy packaging material.

That last comment is not a slur, it’s a fact. Evangelical Michael Gerson wrote in the Washington Post as follows …

“The main problem with God’s Not Dead is not its cosmology or ethics but its anthropology. It assumes that human beings are made out of cardboard. Academics are arrogant and cruel. Liberal bloggers are preening and snarky (well, maybe the movie has a point here). Unbelievers disbelieve because of personal demons. It is characterization by caricature.”

So what has he been sounding off about now?

He has recently been making a few rather weird pronouncements, such as a silly anti-atheist rant here (18th Aug), an extremely ill-informed racist slur here about Ferguson (Aug 21), and now has just come out with another gem. So let’s mine a few nuggets from this latest tablet of stone that he has brought down to us from the mountaintop …

Atheists, he claimed, secretly believe that God exists, and are upset with him because they know he is going to judge them.

English can for some be a rather challenging language and so “atheist” is a rather big word, but it’s definition is still well-known, and yet even with that I’m not quite sure he grasps what the words, “We don’t believe” actually mean. Picture in your mind Zeus, hold that image now … step back … and, yep, you really secretly believe … right? … Nope, it’s just not working is it.

They are a “small group of people, and they get on Fox or CNN and they rant and they rave,” Sorbo said, “and I pretty much based my character [in God Is Not Dead] off of these guys that I see who are just angry — they’re just filled with anger and hatred.”

Now let’s see, somebody popping up every couple of days on FOX or CNN, and spewing angry rants against those who hold a different view, now who fits that description … why it’s Mr Sorbo himself of course. As for the very idea of say Fox News being a platform for non-belief … hummm, not too sure he watches much Fox news, which is perhaps quite a good thing, because if he did, it would only make him even more frenzied.

Why would anybody spend so much time ranting and raving about something they don’t believe in?”

Actually nobody does, but there is a considerable degree of fuss about people with crazy beliefs frantically trying to impose those delusions by force on everybody else. Nobody is bothered about what others wish to believe, that’s called freedom of thought, but when they then try to promote homophobia, misogyny, superstition and intolerance as policy in the public square, and also crowbar magic into the science classroom, then there is indeed quite rightly going to be a bit of a fuss.

He might indeed claim that, but it is not a fact. It should of course not be a surprise to discover that his facts are fiction, because he does appear to embrace rather a lot of stuff that is not really in sync with reality.

atheists use the courts to compel Christians to respect the First Amendment’s Establishment Clause.

Yes indeed, those bastard atheists are insisting that Christians should not break the law, how dare they.

I don’t believe in the Tooth Fairy

Actually yes you do believe … secretly, and are simply pissed off with the Tooth Fairy so you pretend that you don’t.

I know these guys must believe in something

Oh I just have to ask … “Mr Sorbo, how exactly do you know that?” … perhaps he reads minds, just magically “knows”, or perhaps the voice of god in his head told him, or was it from a burning bush perhaps?

they don’t like the fact that there is a higher power out there that is judging how they live their life.

Given his specific political leanings and recent racist rant, I wonder if he is talking about that well-known higher-power … Obama.

So there you go then … if curious, you can listen to the above dialog here, but then you might already have had you fill of “stupid” for the day, and wish to avoid an overdose.

None of this should be a surprise of course, you need to remember that this is Hercules, the son of Zeus, so of course he hates atheists, it’s part of his job description, and it is also natural for him to be ticked off with those that don’t believe in his dad.