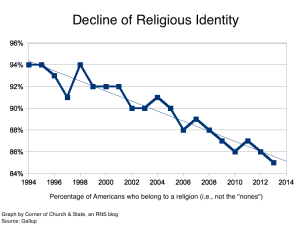 So an article on News24 caught my eye that claims that it is inevitable that Atheism will decline. Now when faced with such articles I do wonder if the author is serious, or if he is simply trolling for a reaction – in this instance, I truly do think that he is serious.

So let’s take a look and see what we have (prepare to be amused and entertained; not actually informed) …

Atheism might be on the rise in getting attention and recognition. Yet as a percentage of the world population it is actually seems to face certain decline. The reason why may surprise you…

… and you can trust him in this respect, his reasoning will indeed both surprise and amuse you.

“…a Pew Research poll in the U.S., the world’s most-religious industrialized nation, revealed that three out of four Americans also agree religion appears to be in retreat.

Next comes the core of the claim …

… and then follows up with …

Because of increasingly high immigration rates to the West, Kaufmann projects regions such as Europe, the U.S., Canada and Australia will grow more religious. “Religion is coming to the West on the backs of immigrants.”

Er yes, so apparently religion will thrive and non-belief will decline because the religious will outbreed the non-religious.

Ever so slight flaw, if that was actually true, then it should already be a measurable effect, but it’s not, the number of None’s is still rising, not levelling off or shrinking.

Little things like facts truly can scupper a religious dream

One rather important fact that the author, who rather ironically labels himself “Christian Thinker”,  has forgotten to consider is that most of the rising tide of non-religious, were originally raised religious (I know I was) and so the assertion that the religious will simply outbreed the non-religious is clearly something that has not been working out in reality. We have no reason to think that this current trend will change in the immediate future.

So what is going on then?

In the last decade we have seen an astonishing rise in the flow of new information via the internet, and that is disrupting, not just our commercial and social interactions, but also our cultural religious beliefs as well. This great disruptor is not about to go away, and so the ongoing trend of the decline of religion is still rolling along.

I still do find it more than a little bit odd and also highly amusing to discover an assertion that religion will thrive and prevail, not because it is claimed to be actually true, but simply because the religious will be bonking each other like rabbits and so will outbreed the non-religious.

So for a good time, call Sister Teresa at St Mary’s, all to help a good cause of course, (wink wink).