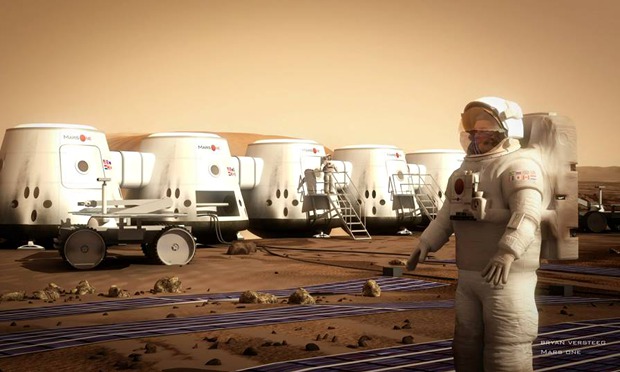 If curious about what happens when, then here is their proposed roadmap …

So what has caught my eye today is that one of the five British candidates on that shortlist, Hannah Earnshaw 23, has an article in the Guardian where she writes all about her hopes, dreams and aspirations for it all.

As a PhD student carrying out astronomical scientific research, I’m naturally drawn to the research possibilities on Mars. We’re already able to achieve amazing things with the rovers we’ve landed there. But there’s only so much that a robotic rover can do compared to what a human on the surface would be capable of, what with the ability to physically apply a range of techniques and make immediate decisions instead of having to wait for commands from mission control on Earth.

When I applied for Mars One, I applied to dedicate my life to the creation of a colony that will have enormous implications for the future of the human race. It’s in many ways a monumental responsibility, a life’s work much bigger than myself, and one for which I feel no qualms about the fact that it’s a journey from which there’s no coming back.

But what about all those she will leave behind, she even has a boyfriend. Over in a different article in the Telegraph she answers that as follows …

Earnshaw has a boyfriend, but says the relationship operates within “the understanding that for me the Mars Mission is what I want to do and if I do end up getting through to the final groups, then we’re going to go our separate ways and that’s something we’re both okay with”.

She adds: “I’m comfortable with the idea of not actually having a life partner as such because I’ll have these life partners in my crew. I compare it a little bit to a marriage because we’ll be spending the rest of our life together if we do get in, but it’s certainly quite different to your idealised picture of a family home”.

Well yes, nothing like a trip to Mars as an ever so subtle hint to your boyfriend that its over.

What is clear is that she has a truly total and complete dedication to the idea, it comes first and everything else comes second.

Now for the skeptical bit

You knew this was coming … right?

My position on all this is that I don’t believe any of it is actually real.

The day may indeed by only 40 mins longer than ours, and so that sounds like no big deal, but we know what actually happens when you switch. The folks working at NASA on the MSL switch to Mars time and that involves starting your day 40 minutes later each and every day 9:00, then 9:40 then 10:20 and so on, it soon adds up … they find that they can only sustain this pattern for about 3 months maximum and then have to stop.

Dealing with the temperature is also a really big deal, the average temperature on the surface is -55 C (that’s -67F), and trust me, that is a big deal, so when they build their habitat simulator they need to be building it in the Antarctic in winter.

Inspired yet? Oh but wait, it also has the backing of Paul Römer, the co-creator of Big Brother a reality TV show.

I’ve spoken to Nagin Cox from the mission operations team for the Mars Science Laboratory (MSL) – NASA’s Mars Curiosity Rover – about Mars One, and she advised me that officially in public, the folks at NASA will simply wish them the best of luck and say nothing further, but in private they are as equally skeptical about it all as I am.

So what is going on, what will actually happen?

They do have funding that is just flowing in, and I note that so far the donations that have received includes these generous amounts …

1 thought on “Packing for Mars … would you be willing to go?”