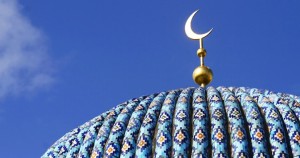 As a practicing Muslim, I don’t believe Islam is above criticism. I do believe that Islam backs free speech. I also believe that Islam champions secular governance. But what’s significant about my beliefs is why I believe them — which is because they are precisely what the Qur’an teaches, and what Prophet Muhammad exemplified.

To establish his claim he then proceeds to slice apart an article by Jeffrey Tayler because it dares to criticise Mohammed, moves on to discuss restrictions on speech in various European nations (My Side note: anti-hate speech is not the same as Blasphemy), discusses “western” foreign policy, and finally proceeds to lavish heaps of praise upon the Ahmadiyya Muslim Community.

So what is going on here, how can he possibly claim that Islam is all about free speech and secularism?

Qasim Rashid is of course a member of the Ahmadiyya Muslim Community, a group that represents a tiny fringe of islamic thinking and represents at most about 1% of the entire Muslim population. From the viewpoint of the other 99% they are heretics and are not considered to be Muslim at all. In fact they are so hated within some islamic nations such as Pakistan that there are specific laws designed to oppress and stifle them.

Do the Ahmadiyya believe in free speech and secularism?

Yes they do, so what Mr Rasid really means when he asserts the claim that “Islam” is all about Free Speech and Secularism is that his specific variation of Islam does. The problem, of course, is that he does not represent the other 99% who deem him to be a heretic, and so when faced with such an absurd claim, the vast majority of readers react to this as might be expected. Here are a few quotes mined from the comments underneath that Salon article …

Rashid is invested in a fantasy about the foundations of Islam

Not one “radical” group in the world today has the body count that comes anywhere near the Islamists count.

With due respect to his education on Islam the writer of this article seems deluded if he believes that Islam is for free speech and tolerance.

The fact of the matter is is that Rashid could very well be beheaded as an apostate by any number of Imams and most certainly by Abu Bakr al- Baghdadi  the head of the new caliphate.

This is hard. I keep re-reading the Koran trying to find the non-violent part and, as far as I can see/read, it isn’t there beyond “make peace with your enemies, lie to them, agree with them, until you can defeat them.” and then grant no mercy unless they convert – and make sure it’s genuine.”

Tens of millions of other Muslims disagree with his interpretations, as do many, many Imams.  So while Rashid can argue Islam believes in free speech, his co-religionists, also speaking in the name of Islam and Mohammed, are busily mutilating and killing people for what they say

The Ahmadiyya community DOES NOT represent Islam, and is universally considered to be a heretical group by Muslim orthodoxy.

You may believe that Islam backs secular governance and free speech, but the facts do not back you up at all.

People are not daft, they can clearly see what is going on in the world, and so when faced with a claim that all of Islam is really all about Free Speech and Secularism, they simply choke on such an absurd claim.

In reality, Islam is not one strand of belief, but is instead a collection of many diverse strands of conflicting belief. One of those happens to be the Ahmadiyya, and while they do indeed promote the idea of non-violence, tolerance, free speech, and secularism, the vast majority of the other strands of Islamic thinking don’t.

Alas, don’t get too excited about the Ahmadiyya, the promotion of non-violence is indeed praise worthy, but like most beliefs they also promote homophobia, and while on the surface appear to be pro-science, under the covers they embrace some truly whacky and weird beliefs such as the claim that the quran describes our modern scientific understanding, so in addition to the usual unsubstantiated supernatural claims there is some highly questionable stuff there as well.

Beyond all that, one thing is abundantly clear and transparent to all – Mr Rashid is not in any position to self-appoint himself as the spokesperson for what Islam is and is not, nobody ever could do that because there has never been any consensus on what “Islam” actually is, and instead we find a vast diversity of conflicting beliefs, much of which is intolerant, misogynistic, homophobic and very violent.