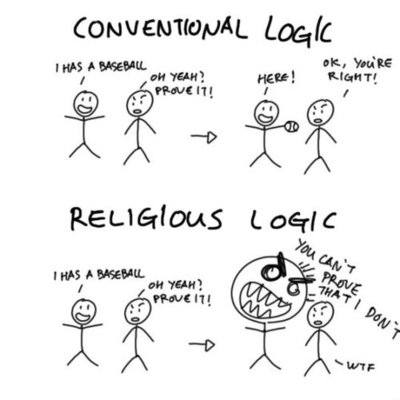 Father Robert Willson writes a letter in which he rolls out the grand old claim of “Oh, but you atheists also have faith”, and then proceeds to list a long litany of things that atheists are supposed to believe in.So let’s comment on that as we proceed to examine his claims …

I agree that Einstein was not a religious believer in the conventional sense but he had a profound awareness of the mystery at the heart of the universe and sometimes used religious terms to describe it.

What is it with the fetish that religious people have to try and claim Einstein. He might indeed have used Religious metaphors, but he was not in any sense religious at all, and there is an entire Wikipedia article that examines it all.

To believe in a creator God who loves his creation is an act of faith.

Translation: “I have no rational reason or evidence for this god claim”

Likewise I believe that an atheist position requires faith, though many atheists reject such a suggestion.

He might indeed believe it, but the reason every atheist would reject it is because it it not a factual claim.

To be an atheist means having faith that the universe and our world just happened by accident and without a creator.

Nope, it does not mean that at all. If faced with things we do not understand, then the correct answer is “I don’t know”. Sticking in “God did it by magic” is not an answer and instead ducks the question. He then needs to explain what evidence there is for “God did it by magic”, and also explain where this God came from. Making stuff up like this on the basis of exactly zero evidence is not answering anything at all, andI’m just not arrogant enough to do that.

An atheist has faith that there is no moral law of right and wrong for behaviour.

Humans were formulating a code of moral behaviour long before religion got into the morality business. He might also be a tad wiser to not bring up the tropic of morality because once he does so it then becomes wholly appropriate to examine the morality of his claimed God, who, if we are to use the bible as a source, was basically both genocidal, pro-slavery, and by our modern standards a complete shit. It is like this because his God is simply a reflection of the society and time that the belief emerged from.

An atheist believes that there is no spiritual reality at all and no possibility of life after death.

No “belief” required, there is simply no evidence for such claims. I do wonder what other things that have no evidence at all he embraces as “truth”

An atheist believes that human beings do not have souls.

An atheist believes that either Jesus Christ never existed or, if he did, he was a deluded fanatic, who just happened to inspire many followers and some of the world’s greatest music and art and literature.

Some are convinced that it is all myth, others lean towards the thought that the ideas of a Jewish Messiah claimant went viral, evolved and spread. Humans tend to behave like this. There are many other examples – Mohammed resulted in rather a lot of Islamic Art, Music and Literature, Buddha also triggered something similar, and so on that basis does he accept either of them?

An atheist rejects the “Lord’s Prayer” as irrelevant yet it is still used regularly in our Federal Parliament.

The use of Religious incantations by elected bodies tends to be a reflection of a cultural heritage, and does not in any way establish the truth of such words. Truth is not something we get to vote on, if the majority decided that magic pink unicorns are quite real, they would not actually become real.

Atheism seems to mean believing in a whole series of negatives and we can never prove a negative any more than we can prove a positive.

Nope, Atheism is simply the rejection of religious claims due to the lack of any evidence, and that is the entire scope of it. It says nothing about anything else at all.

To me, the atheist position requires an enormous act of faith. Personally I do not have enough faith to be an atheist.

So what exactly does such a dishonest stance tell us about the honesty and reliability of anything else he says about anything at all?