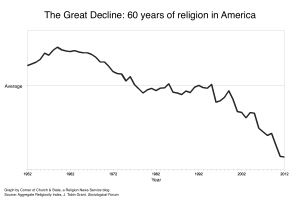 As might be expected, in response to the latest Pew research report that highlights a huge growth of nones and the decline of belief in the US, many believers are popping up to claim that the numbers are all wrong. An example is Jerry Newcombe popping up on the Christian Post with the claim that atheism is flat, and that the nones are really mostly members of non-denominational, evangelical churches.

To be specific, the claim is this …

“Much to the chagrin of most of the media, atheism has remained flat for over seven decades. Four percent of Americans fall into that category. It hasn’t changed. If atheism were on the rise, it would be such a phenomenal story. But instead, since it isn’t, they have to do what they can to make us believe that it is.”

“There are a number of people who would mark ‘none,’ n-o-n-e, on a survey, and two or three questions later will give you the name and address of a place [house of worship] they regularly attend, and guess what? Almost all of these are non-denominational, evangelical churches. I’m not saying all of the ‘nones’ are evangelical.” But many of them are.

OK, so let’s examine this claim.

Did the pew survey actually ask for the name and address of a place [house of worship] they regularly attend?

You can check that yourself, the actual questionnaire they used is available on-line for all to see. 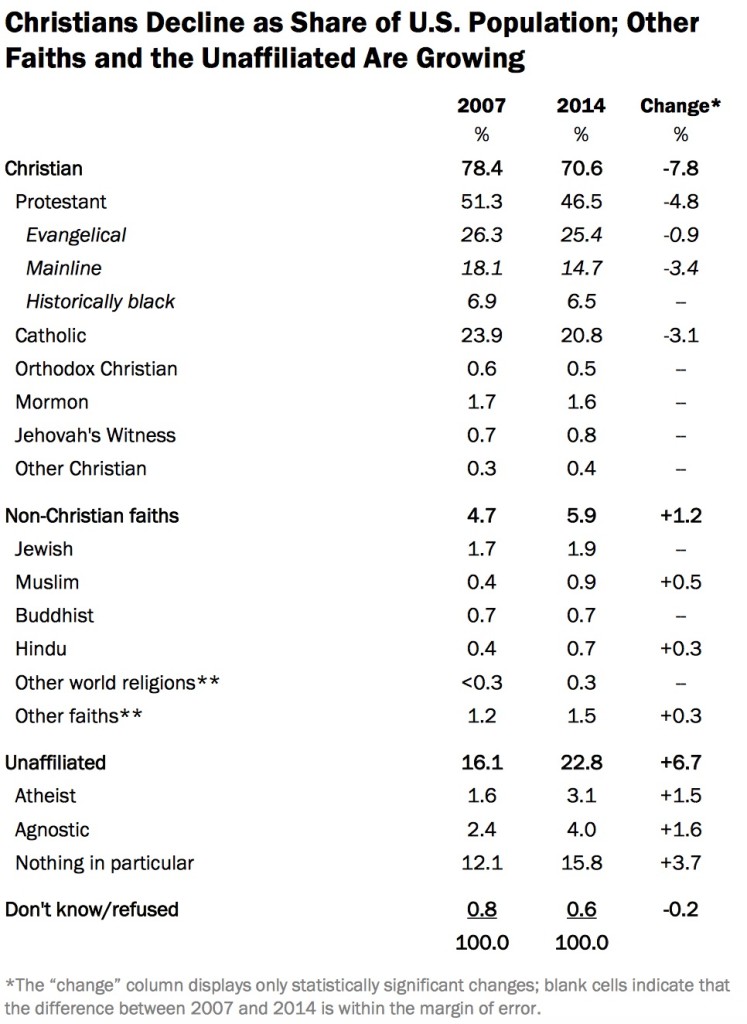 Is there any possibility that non-denominational evangelicals have been marked as nones?

The article within the Christian Post does not withstand any fact checking.

The source for the claims within the article, Dr. Byron Johnson, is a chap who is both a published Christian author and also works on occasions for a rival polling organization, Gallup, so he clearly has a huge conflict of interest. The article is also essentially a logical fallacy known as an “appeal to authority“. We are supposed to accept what Dr Johnson says as fact, nowhere do we find any actual data that we can use to verify the claims being asserted, just his opinion as an “expert”.

It is perhaps understandable that it is like this. When faced with the reality of an all-knowing all-wise deity being a rather naff communicator and failing to convince an increasing number of people that one of the multiple variations of belief is just the right one. It is a very uncomfortable position to be in if you happen to believe, so it becomes necessary to rationalise that reality away. Not doing so might motivate those that do still believe to start to doubt and question by asking themselves why this decline is happening.

Is the author Jerry Newcombe, or his source, Dr. Byron Johnson, deliberately lying about this? No, I don’t think so, I’m quite sure that they truly believe what they are claiming, and simply have a bit of a blind spot here. What tends to happen is that humans can often suffer from what is known as “conformation bias“. This is a tendency we all have to gasp for bits of information that confirm our beliefs, and discard the information that conflicts with it. Conformation Bias tends to become stronger when the issue is emotionally charged, and religion is in essence a very powerful cultural emotional experience, so conformation bias and religious beliefs tend to be quite naturally bonded very tightly together.

Mr Newcombe appears to have published his article is several places. I mentioned it above being here in the Christian Post, but the exact same article also pops up here in Town Hall, and will no doubt pop up in other places as well.