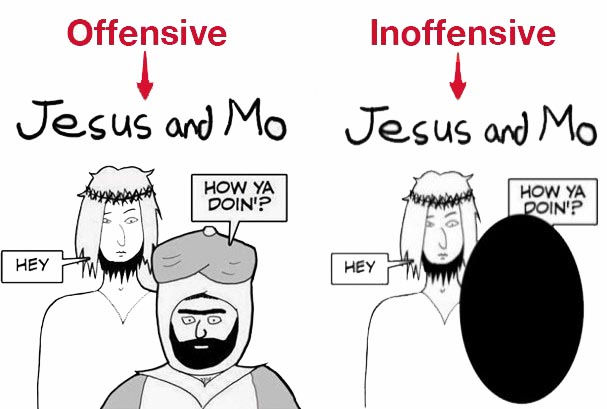 Let’s start this thought experiment with a small scenario. Suppose you lived in a small town that contained buildings for the various religious beliefs to meet in, a Mosque, a synagogue and a Catholic Church. How would you feel if things played out like this. Each friday, the catholics and Jews would gather outside the mosque, hold up highly offensive banners that mocked Islam, and as the Muslims entered, delivered a barrage of verbal abuse. Then outside the synagogue, every saturday, the Muslims and Catholics did the same to the Jewish community, and on Sunday same story again for the Catholics.

Would you find this behaviour acceptable, or would you be seeking to move to another town where people are left free to express their beliefs without being molested?

I’m pondering over the idea of drawings of Mohammed and asking myself if doing that is indeed purely offensive and an utterly unwarranted provocation, or if it really is a defence of freedom of speech or something else.

What motivates me here is not simply to question specific things that I take for granted, but it is perhaps inspired by an article within the Guardian by Flemming Rose entitled “Why I Published Cartoons of Muhammad and Don’t Regret It”. His name and the title of the article most probably now identify who he is, but for complete clarity, he is the Danish journalist, author, and cultural editor at the Danish newspaper Jyllands-Posten, and so was principally responsible for the September 2005 publication of the cartoons that initiated the Jyllands-Posten Muhammad cartoons controversy back in 2006.

So what are his thoughts on all this?

What is clear is that he not only encountered rather a lot of hostility and threats, but also observed that it all gave birth to a considerable number of weird conspiracy theories that took the line that he was really a Jewish provocateur whose mission was to sour the relationship between Islam and the west.

The first rather interesting observation is that what inspired him was not the desire to make some political statement or to simply offend, but rather he was being driven by an emerging climate of fear…

Back in 2005, I was trying to cover a story about self-censorship and fear among writers, artists, museums, publishers, comedians and other people in cultural life in Denmark and Western Europe. A children’s writer had made headlines when he claimed that he had difficulties finding an illustrator for a book about the life of the Prophet Muhammad; the reason, he said, was fear. That was the starting point for a debate about self-censorship in dealing with Islam. Several other examples followed. In one example, a Danish comedian admitted he was afraid of mocking Islam the same way he did with Christianity. In another, two imams called on the Danish government to pass laws criminalizing criticism of Islam.

He then goes on to make a rather important point, the central argument of his article …

What do you do when people adhering to a faith or ideology insist that others with different convictions submit themselves to taboos outside sacred places? Over the years, my answer to that challenge has been consistent. If a believer demands that I, as a nonbeliever, observe his taboos in the public domain, he is not asking for my respect, but for my submission, and that is incompatible with a liberal democracy.

There are multiple and vastly diverse religious beliefs within Islam, it is not one unified group, it never has been and it never will be. Specific things are of course clear and yet should still be given an excessive degree of stress because of the climate of hostility that prevails – the vast majority of Muslims across the diversity of Islamic belief are decent honourable humans, they have no desire to cause anybody any harm, and simply want to live their lives in harmony with all those around them. If somebody flashes an image of Mohammed or says something vile, they simply shrug their shoulders, ignore it and get on with being who they are.

Sadly, there is also an ultra conservative strand of Islamic victimhood that weaves its way through the various sects and it is this mode of thinking that is the ultimate source of the issue. There is an insistence that all must submit to specific religious ideas and those that refuse to do so will cause offence.

His point is this … the primary motive for the production of such cartoons is not to simply deploy offence and rile up a community, but rather as a protest against the threats, the intolerance and the actual violence deployed against all who dare to even criticise such beliefs.

It always strikes me as more than a little bit odd that the individuals who take extreme offence when criticism of their specific religious beliefs is deployed, will at the same time quite happily deploy some rather obnoxious criticism against all other beliefs, and that includes everybody who does not believe exactly what they believe …

Quran (8:55) – Surely the vilest of animals in Allah’s sight are those who disbelieve

… that’s you, you are labelled a “vile animal” simply because you do not believe what they believe.

Yep, but are you now motivated to start a riot, or deploy death threats?

Nope, you will happily ignore it, and so it becomes a non-issue.

If indeed we wish to live in a climate that is offence free, then not only do we get into the game of banning and censoring cartoons, but we are also put into a position that entitles us to ban the Quran itself, a book filled with highly offensive hate speech – is that truly where they wish to go, because if it is, then that is the destination that this road leads to.

Tolerance of Intolerance is not Tolerance

While the intolerance, misogyney, homophobia, violence, and murders persist, then the ridicule of the ideas that inspire it all will also persist. The deployment of violence against criticism is never an appropriate response to intolerance and utterly absurd assertions, but satire and mockery is.

Some truly do get it

Once again, let me emphasise, that the vast majority of Muslims are not cretinous irrational violent thugs, but rather are reasonable rational people who wish no harm to anybody and can quite happily rise above it all.

When Maajid Nawaz, a Muslim who was once a radical but no longer is, was faced with a cartoon of Jesus and Mohammed, he tweeted it out in response like this… 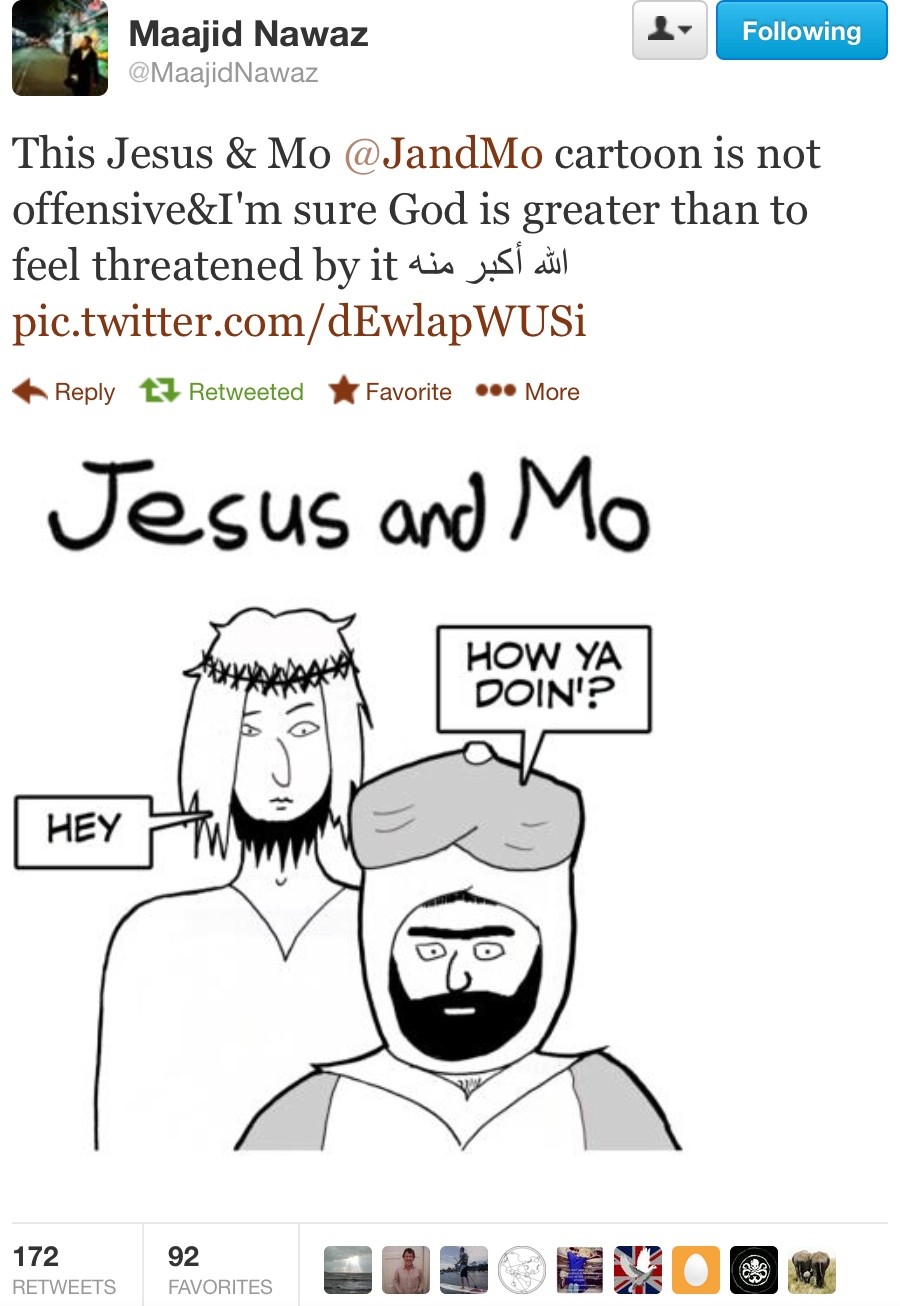 Sadly in reply he, as a Muslim, received death threats from other Muslims for tweeting this, and so while such intolerance persists, it remains rather important to resist it, not just for abstract reasons such as “Freedom of Expression”, but also to support the vast majority of Muslims who are not offended, but can’t say so because of the pervasive climate of fear imposed by the deployment of very real threats.

It’s about what I believe in, about the person I am, about what makes life meaningful and worth living. For me, it’s important to defend the free society against the fear society. It’s also crucial, I believe, to stand for the values of secular democracy. – Flemming Rose

This entire issue has never been about respect, but rather is a demand that we submit to an utterly absurd and completely irrational religious belief, and in reply to that, the only rational response is “NO”.