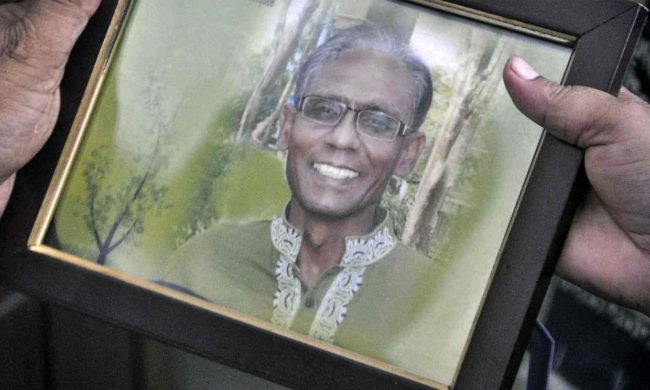 Last Saturday morning, university lecturer Professor Rezaul Karim Siddique, a teacher within the English Department, was hacked to death by Islamist fanatics as he left his home and walked towards the bus station to go to work.

Islamic State has claimed responsibility for hacking to death a university professor in Bangladesh for “calling to atheism”. The claim was reported by the SITE Intelligence Group, which monitors jihadi websites. No further details were available.

Sajidul Karim Siddique, a brother of the victim, said the academic was a “very quiet and simple man” who focused on studying and teaching. “So far as we know, he did not have any known enemies and we never found him worried,” he said. “We don’t know why it happened to him.”

Sakhawat Hossain, a friend and fellow English professor from the university, said Siddique played the tanpura, a musical instrument popular in South Asia, and wrote poems and short stories. “He used to lead a cultural group called Komol Gandhar and edit a biannual literary magazine with the same name. But he never wrote or spoke against religion in public,” he said.

Police said Siddique was the fourth professor from Rajshahi university to be murdered. In February, a court handed down life sentences to two Islamist militants for the murder of Prof Mohammad Yunus.

The killing on Saturday triggered a protest by the university’s teachers and students, who blocked a major road and demanded the immediate arrest of the killers.

The Bangladesh government has blamed the victims of previous murders for being irresponsible enough to criticise the Islamists and hurt religious feelings as their excuse for not taking decisive action, so it will be fascinating to see how they try to wiggle out of doing nothing this time. If indeed their policy of refusing to take a stand against the religious bullies is maintained, then they will find that eventually all voices except those that belong to such religious fascists will have been silenced, and that nobody stands between these fanatics and them.

What is shocking is that almost arbitrary nature of it all, the motivation to kill is bestowed at random upon those who simply embrace the right superstitious beliefs, and is deployed at random against anybody who is not a similar unthinking delusional religious drone. There is no way to ever rationalise this utterly indiscriminate brutality, and instead we can only observe that this is the fruit that springs from the loins of the Islamist philosophy. The traditional “blame the victim”, “blame the west”, or “blame the foreign policy of country X” hold no traction as part of this latest murder, and yet still the flow of blood continues unabated as a tool to force all the conform to their absurd demands.

If indeed within the eyes of the Islamist fanatics simply being a professor who played musical instruments and wrote poems is a “crime” that merits death, then they have taken their brutal blood soaked delusion to even greater heights of absurdity.