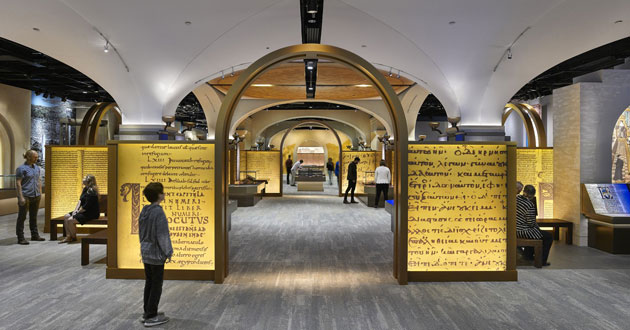 The new Washington based Museum Of the Bible has recently had to admit that five of the prized Dead Sea Scrolls they have been displaying are forgeries. There is a deeper story here under the covers, but first let’s open with this latest by citing the CNN revelation from 23rd October …

Washington (CNN)The Museum of the Bible in Washington, DC says five of its most valuable artifacts — once thought to be part of the historic Dead Sea Scrolls — are fake and will not be displayed anymore.

German-based scholars tested the fragments and found that five “show characteristics inconsistent with ancient origin and therefore will no longer be displayed at the museum.”

When the Museum first opened one year ago in Nov 2017 displaying these, CNN ran a story that challenged the authenticity of their leading artefacts …

Arstein Justnes, a professor of biblical studies at the University of Agder in Norway, says the Greens’ fragments tell quite a different story. This one is about a scandal in the world of biblical antiquities.

On his website, “The Lying Pen of Scribes,” scholars and scientists have identified more than 70 Dead Sea Scroll fragments that have surfaced on the antiquities market since 2002. Ninety percent of those are fake, Justnes says, including the Museum of the Bible’s.

If Justnes and other scholars are correct, the Dead Sea forgeries could be one of the most significant shams in biblical archeology since the “Gospel of Jesus’ Wife,” a fiasco that hoodwinked a Harvard scholar and made worldwide news in 2012.

Basically these folks have more money than integrity and common sense, and so they have been completely and totally played. These fragments are perhaps the modern equivalent of fragments of the true cross that floated about in the middle ages as “proof” for the gullible to buy.

How has this happened?

Who exactly is behind the Museum of the Bible?

Founded by the staunch evangelical Steve Green, the CEO of Hobby Lobby, the $500 million museum project was first announced in 2012, and then finally opened its doors in Nov 2017.

Their official claim is that they are nonsectarian, non-political, and that it does not proselytize, and yet these are evangelicals in the Trump era, so I’m not convinced that anything they say has any credibility. What is clear is that while on the surface they do indeed craft a facade that is neutral, if you dig a bit it soon becomes transparently obvious that it is not.

You don’t need to take my word on this, simply check out the Wikipedia page that cites Biblical scholars who have very carefully reviewed them and then had this to say …

Biblical scholars Joel Baden of Yale Divinity School and Candida Moss of University of Birmingham, who wrote the book Bible Nation: The United States of Hobby Lobby,[42] expressed concerns about the museum’s mission, saying, “They have misled the public at large by promoting a curriculum and a museum that tell only the story that the Greens want to tell, without acknowledging that scholars and experts have spent decades, indeed centuries, laboring to provide very different accounts of the Bible and its history.”[43]

After spending many hours while writing the book with museum founder Steve Green and president Cary Summers, they concluded:

It’s not really a museum of the Bible, it’s a museum of American Protestantism. Their whole purpose is to show this country as a Christian country governed by Christian morality. (Moss)[44]

Their three-minute promo is fascinating demonstration of this problem. At least half of it is a reenactment of American history which has no bearing on the Bible—the signing of the Declaration of Independence, for example, or the Revolutionary War. The worry is that the museum portrays a story of the Bible that culminates in Protestantism and America. (Baden)[44]

John Fea, associate professor of American history at Messiah College, and chair of the history department, said, “It’s hard to see this as anything other than an attempt to try to bring Christian values in the Bible’s teachings as understood by evangelical protestants, like the Greens, into the center of American political life and American cultural life.”[45]

Gordon Haber wrote up a review after a visit when it first opened. Titled “We Went To The Museum Of The Bible — So You Don’t Have To“, and there he describes what he saw (It is long and worth a read)…

Maybe so. But the Green family and others involved with the museum at the highest levels, Zeiss included, are evangelical Christians. Green himself has been quoted as saying he believes that the King James Bible is inerrant and that the United States was founded on “Christian principles.” In this light, the concerns of religion scholars seem warranted: that the Museum of the Bible will both reinforce the narrative of America as a “Christian country” and undermine the separation of church and state, at least in the eyes of its visitors.

… Dominating “Bible in America” is a bizarre series of murals depicting ostensibly watershed moments in American history. We see Native Americans earnestly receiving Bible instruction and then earnestly slaughtering colonials; we see a disembodied, presumably divine hand with a quill pen poised above Article VI of the Constitution — which forbids religious tests — and then George Washington swearing the Oath of Office with one hand resolutely on a Bible.

… Thus while the museum insists that it is non-sectarian, it demonstrates an undeniable emphasis on the evangelical conception of the Bible and its role in Western culture and American life. Which would be absolutely fine, as Green can do whatever he likes with his cash, so long as he’s aboveboard about provenance.

This latest scandal is not the first

Having only opened their doors for less than a year, what is quite frankly astonishing is that this is not the first time their tower of evangelical babel has come crashing down.

Back in July 2017 it was discovered that they had been funding ISIS.

In order to stock up the museum they entered the market and were vigorously buying everything they could get their hands on. That included the illegal purchase of ancient cuneiform tablets on the Syrian and Iraq black market and then proceeded to smuggle them into the US. That became news because they got caught and were fined …

@HobbyLobby too "moral" to provide contraceptive coverage to employees, not moral enough to refrain from illegally looting war-torn country

Did this theft and looting raise any concerns within the Evangelical community?

Nope, not at all.

The official response was that they agreed to pay $3 million and return the artifacts smuggled out of Iraq as part of a settlement with the Justice Department.

In 2017 at the Museum opening Mr Green was saying …

“We should have exercised more oversight and carefully questioned how the acquisitions were handled,” said Steve Green, who, in addition to being chairman of the Museum of the Bible, is also president of Hobby Lobby.

Green also says the Museum of the Bible was not involved in the smuggling scandal.

That’s PR spin (lying for Jesus) … you don’t have a “Museum of the Bible” to setup and also purchase on the black market thousands of artefacts for your own personal use. In fact that was clearly stated …

But at a news conference at the museum last month, Trobisch said some of the confiscated objects had been destined for an exhibit on writing in ancient history. The museum had to borrow artifacts from another collection instead.

… and yet here we are one year later and the 5 Dead Sea Scrolls they sent off for independent testing because they were sure that they were real have been verified as fakes.

They have in fact got 16 fragments, of which only five were tested, so this is not the end, it is highly probable that most of the others are also fakes.

With access to huge amounts of money and a passionate deep evangelical belief that the US is divinely inspired and that the King James bible is the ultimate “truth” it is no surprise to observe that fraudsters have played them.

It is also no surprise to observe that serious scholars have been deeply critical of a seriously flawed and quite biased narrative.

Kipp Davis, an expert on the Dead Sea Scrolls at Trinity Western University in Canada, was one of several academics who has tried to warn Christians, including the Green family, about the forgeries.

Davis, who studied the fragments for the Museum of the Bible, said Monday’s news about the fakes felt like bittersweet vindication. His takeaway: Evangelicals and others whose faith motivates them to collect artifacts should be very careful with antiquities dealers eager to pique their interest in supposedly ancient scraps of scripture.

“These good intentions that draw from a place of faith are subject to some really gross manipulations,” Davis said, “and that is a big part of what has happened here.”

The scholar said he believes 2-4 of the Greens’ 16 fragments may be authentic, but that at least 8 are fake.

So in the end what do we actually have?

We have a Museum fuelled by cash and a right-wing evangelical that has utilised forgery, theft, and the antiquities black market to create this seriously flawed edifice, what can I say except to observe that the irony is not lost on me to note that these are also the same folks who are Trump’s support base.