OK, a bit of fun today … tongue-in-cheek only … but still a real story.

Just off the North coast in the UK there exists a tiny little tidal island known as “Holy Island” and built upon it is the monastery of Lindisfarne. Recently it has become the centre for the revival of Celtic Christianity and so it has become a popular retreat centre, as well as holiday destination.

To get there there is a tidal causeway – hint: when the tide is high, you don’t cross. Ah but I don’t need to tell you that, its the bleeding obvious, yes? … right? … apparently not. 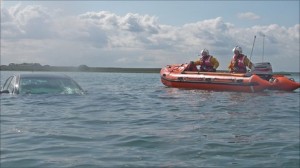 The BBC reports that some visitors are apparently stupid enough to ignore the bleeding obvious and end up driving their cars into the North Sea. So, whenever you are tempted to think, “Nobody could be that stupid”, somebody will come along and prove you wrong.

You can read the story here on the BBC news site. They write …

A lifeboat volunteer says it is “quite bizarre” that tourists continue to try to drive on a tidal causeway outside safe crossing times.

It follows the rescue of an Australian couple who became stranded on the Holy Island causeway, off Northumberland.

That rescue was the eighth Seahouses RNLI crew has carried out this year.

Ian Clayton, from the Seahouses station said: “It’s incredible that people seem to think they can drive their cars into the North Sea.”

Apart from wondering what they put down on their insurance claim (can you actually get insurance for stupidity), I also ponder the thought that perhaps the religious atmosphere has somehow scrambled the brains of these pilgrims. Folks who truly believe a supernatural entity exists quite obviously have no trouble in believing that their car will magically travel across the top of the ocean.