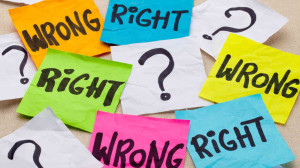 The objective moral claim is a very popular rebuttal that the deeply religious often put forward, and time after time it will, like a game a wack-a-mole, pop its head up. So today’s example is a letter written by a Mr Ron Thomas and published in The Gazette / Times-Courier, a paper that has a focus upon the cities of Mattoon and Charleston, which are located 8 miles apart in Coles County in East Central Illinois. It starts as follows …

There is nothing within atheism that warrants them to identify a moral wrong.

Well yes, that is essentially correct, atheism is simply a negative conclusion to just one single question, “is there a god?”, and so it contains no religious text, no clerics, no moral guidance or ethical framework, nor are there weekly meetings, or a support network, or a set of doctrines that much be rigidly adhered to. Instead it is simply the rejection of the central religious “there is a god” claim due to the observation that this claim comes without any credible evidence that justifies accepting it.

People do of course believe, and that is fine, but then tend to do so for what can be best described as cultural or emotional reasons, and not because the claim has been objectively verified.

Ah but that is not what Mr Thomas is getting at, because he then precedes to take this tack …

When they assert that something is wrong in a moral context all they are really saying is “I think that is wrong, and you should to!” There is nothing more they can say. Thus, in the context of the Holocaust, the moral force of an atheist (agnostic, secularist) is strictly a subjective opinion. They cannot objectively sustain that Nazi Germany did anything morally wrong. This was brought out in Wallace Matson – Thomas Warren Debate on the existence of God (Tampa, 1978).

Oh dear, no this is simply not factually correct. People generally work out what is right and wrong, not because they have read it in the bible but rather because of their empathy, compassion and basic humanity. There is no evidence for what he might classify as “objective morality”, and instead we have the assertion that this external source for morality is god.

Mr Thomas brings up the Holocaust as an example, so try this … is genocide wrong because god says it is wrong within the bible, or is it wrong regardless of what you might read in the bible?

Hint: here are a few bible verses to help you out …

And when the LORD thy God shall deliver them before thee; thou shalt smite them, and utterly destroy them; thou shalt make no covenant with them, nor shew mercy unto them. Deuteronomy 7:2

But of the cities of these people, which the LORD thy God doth give thee for an inheritance, thou shalt save alive nothing that breatheth. Deuteronomy 20:16-17

So smote all the country … he left none remaining, but utterly destroyed all that breathed, as the LORD God of Israel commanded. Joshua 10:40

Thus saith the LORD of hosts … go and smite Amalek, and utterly destroy all that they have, and spare them not; but slay both man and woman, infant and suckling, ox and sheep, camel and ass. 1 Samuel 15:2-3

OK, so the point is clear, here is the ultimate source for the objective morality as advocated by Mr Thomas is directing numerous campaigns of genocide. Was genocide Ok then, but is wrong now, and if so then that is not objective, or was god breaking his own rules perhaps?

If we go back to the Nazi example, we should remember that their motto was Gott mit uns (God with us), so does that justify the Holocaust? The bible advises us that such campaigns were just fine, and they did what they did with “Gott mit uns” embossed on their belt buckles, so does that make it OK?

I know that you know the right answer, and I also know that you can make an immediate leap for that right answer without reference to the bible. Belief or non-belief in a middle-eastern mythical supernatural entity dreamed up rather a long time ago as humans struggled to make sense of the world around them does not change that moral conclusion.

If indeed people did lean upon the bible as their moral guide, I’d personally be rather worried about them because it is from cover to cover a pro-slavery book, and I don’t mean just the old testament, I really do mean cover to cover (“Slaves obey your masters”). Luckily those that claim to strictly adhere to it as a moral guide tend not to actually do that.

So when faced with somebody we leans upon the bible as their objective moral guide, my immediate thought is to suggest, “No thanks”, because I have no desire to sell my daughter into slavery (Exodus 21:7), nor do I need guidance on how to beat my slaves (Exodus 21:20), I am rather fond of shellfish (Leviticus 11:12), and I do have some rather strong objections to genocide. In fact there are rather a lot of things within the bible that human culture once accepted and no longer does, because we (and I include that vast majority of believers there) have used our reason and empathy to work out that such primitive morality is bullshit, and so that primitive morality has been quite rightly discarded.

1 thought on “How do Atheists work out what is right and wrong if they reject the bible?”