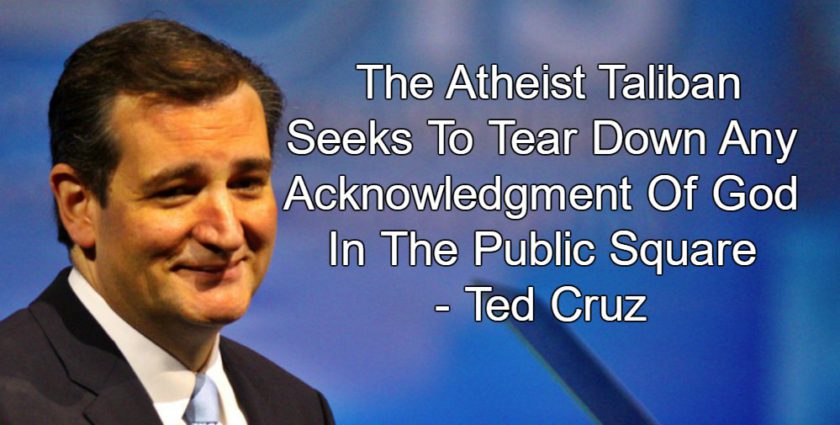 A phrase that has entered the public consciousness recently is the term “Atheist Taliban” via a Mr Ted Cruz (if you are not in the US and have no idea who he is, then trust me, you really really do not want to know).

So the contextual foundation here was laid by a conservative shock jock, Jan Mickelson, who is infamous for previously suggesting that bringing back slavery would be a jolly good idea. No really, I’m not kidding …

Just last week, the conservative Iowa radio host issued a ringing endorsement for enslaving undocumented immigrants who refuse to leave the country. Mickelson thinks the United States should give any resident without the appropriate paperwork two months to leave. If they don’t, Mickelson says, they should become the property of the state in which they reside, where the could be put to work on projects like building a wall on the United States border with Mexico. After being pushed by a caller about his idea, Mickelson asked “What’s wrong with slavery?”

Yes, it is radio, and so they need to glean attention by saying outrageous things, hence anything said is perhaps designed to provoke rage because even that can be an effective a tool to bump ratings.

So anyway, a few days after saying the above, Mickelson interviewed Cruz and as you might imagine a complete lack of empathy sprinkled with a not so delicate and rather blatant bit of delusional thinking prevailed. One gem that popped up was this new term “Atheist Taliban” ..

“There are these zealots — as you put it, the atheist Taliban — that seek to tear down any acknowledgment of God in the public square, and it’s contrary to our Constitution, it’s contrary to who we are as a people.”

What these guys are babbling on about is stuff that truly is contrary to what the US is all about.

Congress shall make no law respecting an establishment of religion, or prohibiting the free exercise thereof; or abridging the freedom of speech, or of the press; or the right of the people peaceably to assemble, and to petition the Government for a redress of grievances.

In other words, permitting government entities to promote a specific god claim is contrary to the constitution because the US is not a religious state that promotes a specific belief, and can legally neither promote nor inhibit any belief.

If we do indeed wish to see an example of somebody behaving like the Taliban, a religious theocratic dictatorship imposing specific religious beliefs upon all, then Mr Cruz is pointing his finger in the wrong direction here.

As a brief reminder, this is a chap who is …

… so if indeed he wishes to point the finger at people behaving in a Taliban like manner, then he need look no further than the nearest mirror.

Just one single byte on my keyboard sums it all up … $

CNN reports Farris and Dan Wilks, billionaire brothers who made their fortunes in the West Texas fracking boom, have given $15 million to the pro-Cruz super PAC, Keep the Promise.

Friendly Atheist reports the billionaire brothers belong to and preach at the Assembly of Yahweh 7th Day in Texas. The fundamentalist sect holds the Bible to be infallible and interprets every word of the Bible literally.

… so in essence, he has been bought and paid for by folks with a very specific narrow religious agenda, and is parroting what this religious Talibani cabal want.

1 thought on “The Atheist Taliban”