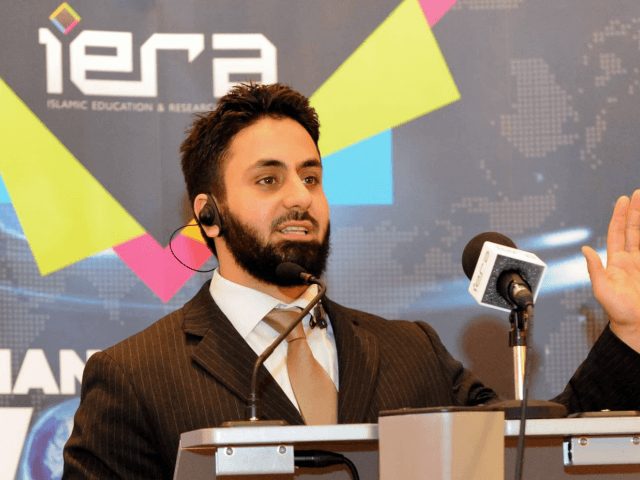 Ashley Madison is turning into the gift that just keeps on giving … and so the latest name to pop up is the rather famous (in some circles) Islamic Apologist Hamza Tzortzis.

First a bit of background. Are you are wondering who Hamza is? Well, he is one of the movers and shakers behind the rather dubious hate group known as iERA.

Yes indeed, you will find a rather extensive report on them here that has been published by the Council of ex-Muslims. A few quick highlights from it concerning Hamza are as follows (see page 14 onwards, they back this all up with evidence):

… so in essence, no this guy is not a moderate, and so he is promoting ideas that should indeed be robustly challenged, and so when it comes to Ashley Madison, then the revelation that the name of this pseudo-moralising hypocrite has popped up is not really a surprise.

His claim that it was not him is indeed not credible, one commenter in that thread asked …

“So Hamza, you are claiming that some guy knew all of your private information and wanted to screw with you so he created a fake account on Ashley Madison. This guy then paid hundreds of dollars to maintain the account for 9 months. This account was then used to make transactions at locations where you were also present at the time. Then the ultimate plan was to hack the Ashley Madison database and release 40 million users so you could be exposed. Am I getting this right?”

At first Hamza tried to reply with this …

“You’re an idiot. Read the post before you write. The amount was 15 pounds a month, not hundreds.”

… but then later simply purged the comment, and then finally decided to purge the entire statement.

To be honest, I’m not really convinced this will have any real impact. This is an extremist who advocates quite a few repugnant things, and so finding his name popping up on Ashley Madison is not really going to have much of an impact, he will simply keep his head down and let the storm roll over, and if anybody confronts him about it, he will simply continue to declare it to be malicious and not him.

Ah but … will he uphold the standards that he promotes and personally apply them to himself? … remind me again what the penalty for Zina in islam is, as advocated by Hamza himself.

The friendly atheist has lots of screenshots and also clips of Hamza in action that reveal what a truly “nice” guy he really is. It really could not have happened to a nicer guy.

This comes from the above link … 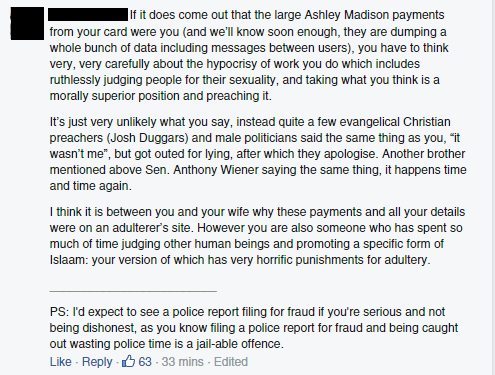 1 thought on “Islamic Apologist caught in the Ashley Madison Hack”