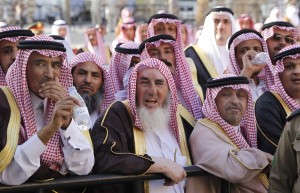 When you think of Islam, perhaps the place that in many ways defines the very heart of it all, its Mecca (yes pun intended), is of course Saudi Arabia.  In fact, that is not strictly true, because while it may indeed be the place that is the geographical origin of the belief, the form of Islam that prevails there does not represent the thinking and practises of the vast majority of Muslims on the planet today.

That Saudi variation is known as Wahhabism, and is an ultraconservative and extremely austere form of Islam that was started by an eighteenth century cleric, Muhammad ibn Abd al-Wahhab (1703–1792), and hence the name.

5 facts about Wahhabism that most people do not know

So if you lived inside this Islamic bubble of utter madness then you might, like many do, wear the appropriate religious mask for the sake of having an easy life.

Things however are no longer that simple, there is a new flow of information that has changed everything, it has exposed those inside this bubble to criticism of the strict beliefs, to other variations of more moderate and tolerant Islamic belief, other beliefs, and non-belief, and so things are indeed being disrupted.

The evidence is anecdotal, but persistent.

“I know at least six atheists who confirmed that to me,” said Fahad AlFahad, 31, a marketing consultant and human rights activist. “Six or seven years ago, I wouldn’t even have heard one person say that. Not even a best friend would confess that to me.”

A Saudi journalist in Riyadh has observed the same trend.

“The idea of being irreligious and even atheist is spreading because of the contradiction between what Islamists say and what they do,” he said.

The perception that atheism is no longer a taboo subject — at least two Gulf-produced television talk shows recently discussed it — may explain why the government has made talk of atheism a terrorist offense. The March 7 decree from the Ministry of Interior prohibited, among other things, “calling for atheist thought in any form, or calling into question the fundamentals of the Islamic religion on which this country is based.”

In fact the same article goes on to make the observation that a 2012 poll by WIN-Gallup International of about 500 Saudis found that 5 percent described themselves as “convinced atheist.” Oh but wait, if you go to that poll and review the numbers, you soon make a rather fascinating discovery, something that the Salon article complete missed …

Now here is the key point … yes 5% identified as “Atheist”, but another 19% clearly identified as “Not Religious” – in other words almost 1 out of every 4 people living inside this ultraconservative religious bubble completely reject religious belief.

It can perhaps be observed that the very best argument against the prevailing superstition is the reality of the superstition itself.

As observed by the Salon article …

“I believe people started being fed up with how religion is really controlling their life and how only one interpretation of religion should be followed,” said activist Fahad AlFahad.

The growing skepticism about religion and clerics is more visible nowadays because of social media outlets, including tweets, blogs and Facebook pages.

1 out of 4 being non-religious is a very dramatic change.