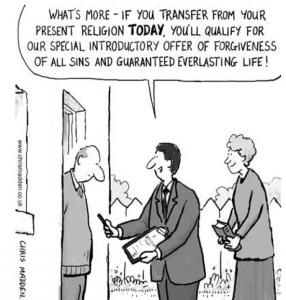 Jonny Scaramanga, an ex-fundamentalist, writes in the Guardian about some of the completely crazy things being promoted by Accelerated Christian Education. This is a Bible belt based group  that promotes religious indoctrination under the banner of “education”, and consists of a biblical literalist agenda. The specific concern here is that they not only have 3,000 Schools in the US who have adopted their batshit crazy bullshit, but have about 59 schools in the UK drinking their cool-aid.

What they are all about is not hidden, they are quite open about it and list their principles in a “statement of faith” which declares the belief that the Bible is literally true – the earth is only 6,000 years old, Adam and Eve really existed, and the flood really happened, Genesis is an 100% accurate historical document. The religious specifics I get, however what really bothers me is the promotion of complete fiction as fact …

1) God is a right-winger. “Liberals” are the root of all political evil. God’s values are rightwing, and anything else is a rejection of His will… If your political views lean left, you are neither a true Christian, nor a good citizen.

2) No transitional fossils exist. Despite the avalanche of transitional fossils, ACE still shouts about mysterious “gaps”: … I’m sure the scientists who excavated tiktaalik will be crushed to learn that their discovery doesn’t, in fact, exist. But even without fossils, evolution is thoroughly supported by DNA and a wealth of otherevidence.

3) Solar fusion is a myth. It is nuclear fusion that has enabled our sun to shine for billions of years. ACE are determined to prove that the universe is less than 10,000 years old, in line with their literal interpretation of Genesis. As a result, they teach that solar fusion is “an invention of evolution scientists …

4) Evolution is an absurd, deliberate lie. Although ACE make no bones about being Creationists, they sometimes claim they also teach evolution. While evolution is mentioned frequently, it’s only to ridicule it. …This worldview is antithetical to reasonable education.

None of this is “education”.

As pointed out by the Guardian article, what is truly worrying is that UK government agency NARIC has defended its decision to deem ACE’s in-house qualification, the International Certificate of Christian Education, comparable to A-levels … yikes.

“If parents want their children to obtain a very limited and sometimes inaccurate view of the world — one that ignores thinking above the level of rote recall — then the ACE materials do the job very well. The world of the ACE materials is quite a different one from that of scholarship and critical thinking.” – D. Flemming and T Hunt of the education journal Phi Delta Kappa – “The World as Seen by Students in Accelerated Christian Education”. Phi Delta Kappan (68): 518–523. 1987.