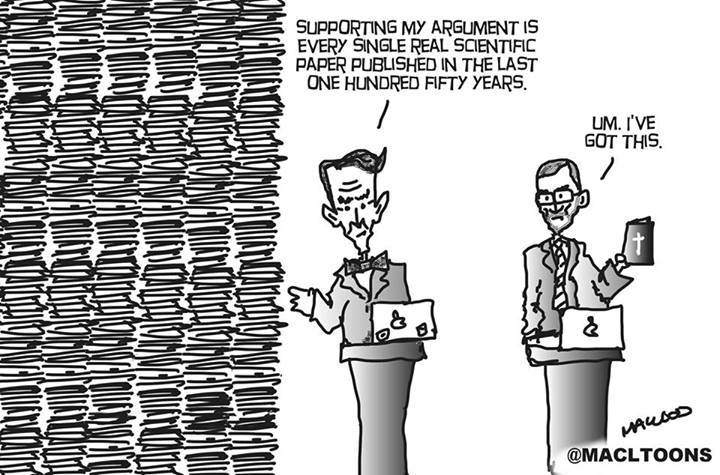 Jack Wellman, Pastor of the Mulvane Brethren Church in Mulvane Kansas, has a posting up in which he has 7 questions to Ask an Atheist. I am quite frankly amused because these are 7 questions you really should not be asking any atheist … ever … unless of course you enjoy having your ass chewed up and handed back to you on a silver platter.

So let’s take a brief Look at each and present a bit of guidance on the use of such questions for those that truly do believe.

Q1. Why did you become an Atheist?

This is the ever present and not so subtle shifting of the burden of proof ploy. The real question to be addressed is the one resting firmly upon Mr Wellman’s shoulders. He needs to explain why his claim is credible, it is not up to those that dismiss his claim to attempt to debunk something that has never been established as true.

Within his explanation of this question we get, as justification for his position, bible verses. So here is another bit of friendly guidance – quoting the bible to people who do not actually believe it will have exactly zero impact. It is perhaps very much akin to quoting The Iliad to establish that the Greek Gods are real.

Q2. Where did matter come from?

Seriously, don’t toss out random physics questions and don’t pretend you actually know any meaningful and demonstrably true answer. The essence of such questions boils down to this, “I have no clue about X, therefore my God did it by magic”, and that really will not convince anybody of anything, except perhaps a high degree of gullibility. It is best avoided.

Q3. Not all atheists are hostile toward Christianity. Are you and if so, why?

Well gosh, I simply can’t imagine why homophobic vitriol would upset anybody. Nor can I possibly imagine why the constant pressure to impose specific beliefs and generally interfere in the lives of millions who do not believe what you believe would be an issue … oh wait, yes I can imagine that.

There of course rests the real crux of the matter.  It is not the belief as such that is an issue, but rather it is the intolerance and outright hostility that is constantly bestowed upon all who do not believe exactly what you believe that is the problem. You can’t preach love and promote intolerance, it sends a very clear message and it is one that is perhaps not the one you intended.

Q4. Have you asked yourself, what if you’re wrong and there is a heaven and a hell?

I’d really strongly suggest that googling a bit to understand the flaws within this argument before promoting it.

One wonders which specific heaven and Hell is on offer here. Has Mr Wellman ever seriously pondered over the thought that he just might be wrong and that the Islamic Heaven and Hell is the right one?

Q5. What happens after you die and what proof of your belief do you have?

Yes we are back to the shifting of the burden of proof once again. Mr Wellman has a specific claim and if he wants to be taken seriously, then he needs to establish his claim with evidence.

There is of course life after your death, it just happens to be a life for lots of other humans and does not involve you.

Q6. Do you believe in objective truth?

I find it more than a little bit hypocritical on being lectured about morality by a chap who leans exclusively upon a pro-slavery text as an ultimate objective truth. The Bible is pro-slavery from cover to cover and even contains explicit instructions on whom you may enslave, how you should enslave them, and how to correctly beat your slave (apparently it is OK as long as your slave survives the beating – Exodus 21:20).

This is perhaps the cue for … “Ah but that was the old testament, we now have the new testament”. That of course is the updated version where slaves are advised to obey their masters, and I do also wonder what exactly is objective about such a switch.

Yes, indeed, Mr Wellman ran out of steam, and despite his title assuring us of seven questions, we actually get just six, the 7th is a conclusion.

So let me offer one very key observation on all of this.

If you truly believe (which by the way is fine) and you want to engage in a meaningful dialog with people who value reason and evidence, then deploying actual reason and verifiable evidence will gain you some traction. Anything else will most probably reap a harvest of ridicule.

These are not questions being posed in good faith, but rather it is an attempt to emotionally manipulate you into believing. But for those with sincerely held beliefs here is a quick summary …

To sum all that up, basically stop being a religious crank and strive instead to be a decent human being. It involves having a bit of empathy for people who do not believe what you believe. You might be astonished to discover that when you cease behaving like a jerk then others will stop treating you like one. Many religious people and also non-religious have managed it, so be inspired by them and do the same.

2 thoughts on “7 question you should never ask an atheist”