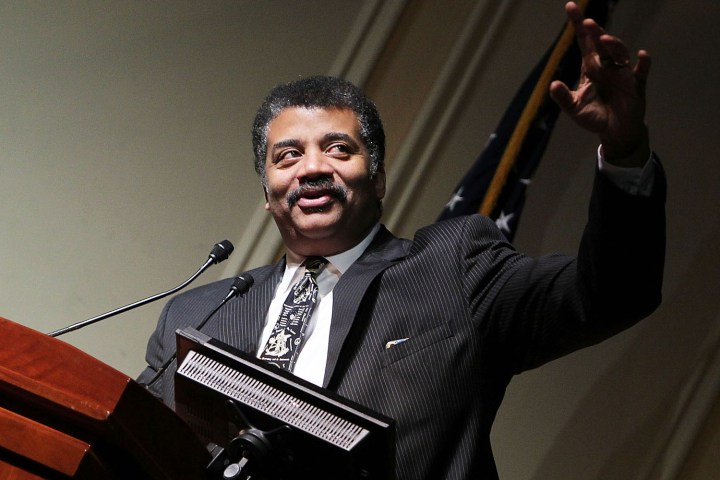 For those of you that are highly religious Christians, are insecure about that position, and have no sense of humour, please stop reading now. If you do not heed this warning then there is a distinct possibility that you are about to be highly offended.

Neil deGrasse Tyson, Astrophysicist, Author, and host of Cosmos, has been tweeting some hilarious tweets on Christmas day that have apparently upset rather a lot of religious people, and here for your enjoyment are a couple … 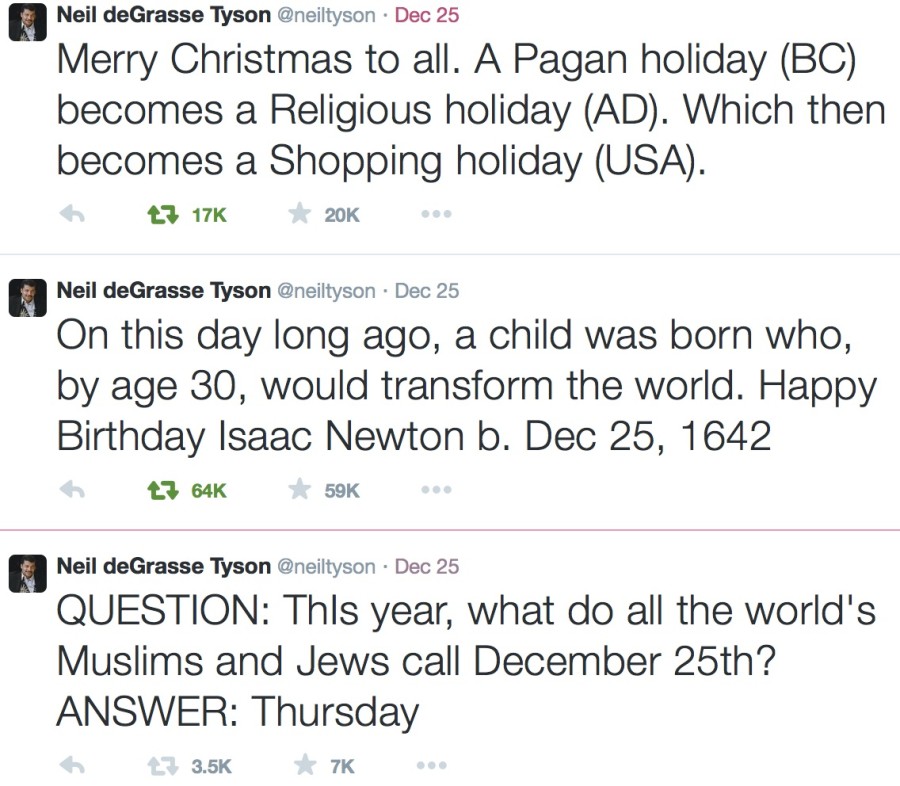 As you can see from the above, they were quite popular and resulted in lots of retweets, but as you may have guessed by now, a few religious folks found these tweets to be highly offensive, and so tweeted back at him stuff like this …

What wonderfully kind and loving people these believers are.

To be totally fair, not all those who believe are as humourless or insecure as the folks above who made a decision to be offended and so spent their Christmas day on twitter tweeting stuff like that. One can only wonder if they stood by ready to be offended, and I do also find it rather odd that they felt compelled to tweet such stuff back when all they need to do is to simply block him on their twitter feed if they really do not like what he has to say.

A few other items also popped up within this twitter storm that are worth briefly discussing.

There was also a heated debate regarding the day that Isaac Newton was born on and many were pointing out that it was a myth that his date of birth was 25th December. It is true that by our calendar he was born on 4th January, but at that time in England they used the older Julian calendar, and so on the day he was born everybody recognised it as 25th December. Officially the changeover from the Julian calendar occurred in 1752 under the Calendar (New Style) Act of 1750 when they then advanced the calendar by 11 days, so technically any birth officially registered prior to 1750 would have used the old calendar, and so his date of birth really was the 25th December – that was the date on the then official calendar on the actual day of his birth.

There were also believers who popped up and pointed out the Newton was a religious man. That is true, but he was not religious in the traditional sense, and would be regarded by most religious people today to be a complete nut because his specific beliefs would have been quite alien to them; for example he did not believe that Jesus was god. While Newton may indeed have been highly eccentric, he is also quite rightly recognised as one of the most influential scientists of all time and as a key figure in the scientific revolution – Mr Tyson’s tweet is wholly factual.

What Mr Tyson tweeted was simply a bit of gentle humour that was in essence praise for a scientific genius, and nothing more than that, so the fact that it all triggered a twitter storm says a great deal about the depth of insecurity that rests deep within the hearts of those that deem the 25th December to be in some way special, an international magic baby day perhaps, and so it is no surprise that his latest tweet should be as follows …

Mr Tyson reflects on the fallout from it all on Facebook …

Well.  It’s official.  Far and away my most re-tweeted tweet appeared Christmas day.  Here are the 125 characters (my usual length) in their entirety:

Everybody knows that Christians celebrate the birth of Jesus on December 25th.  I think fewer people know that Isaac Newton shares the same birthday.  Christmas day in England – 1642.  And perhaps even fewer people know that before he turned 30, Newton had discovered the laws of motion, the universal law of gravitation, and invented integral and differential calculus.  All of which served as the mechanistic foundation for the industrial revolution of the 18th and 19th centuries that would forever transform the world.

My sense in this case is that the high rate of re-tweeting, is not to share my enthusiasm of this fact, but is driven by accusations that the tweet is somehow anti-Christian.  If a person actually wanted to express anti-Christian sentiment, my guess is that alerting people of Isaac Newton’s birthday would appear nowhere on the list.

Some even called for me to delete the tweet.  But instead, earlier today, I tweeted this:

“Imagine a world in which we are all enlightened by objective truths rather than offended by them.”

… a humble thanks for your continued interest in what I have to say about life, the universe, and everything.  But most importantly, enjoy a Happy New Year.  A few days after, I’ll be tweeting about Earth’s perihelion.  Just a head’s up in case people want to avert their eyes over that one.

I am, and always will be, a servant of your cosmic curiosity.

3 thoughts on “The “Highly Offensive” tweets of Neil deGrasse Tyson”