You may have heard about the story of a teenager in Turkey who was sent to jail for apparently insulting the president. Now the words “teen” and “insult” might conjure up in your mind some rebellious kid yelling unprintable abuse at a well-respected politician, but that is not what went down here, this is something quite different.

This is a story about a brave kid (pictured below) who read out a statement hailing the principles of secularism as enshrined by the Turkish republic’s founding father, Mustapha Kemal Ataturk, and accused Erdogan’s ruling Justice and Development Party of corruption and graft. 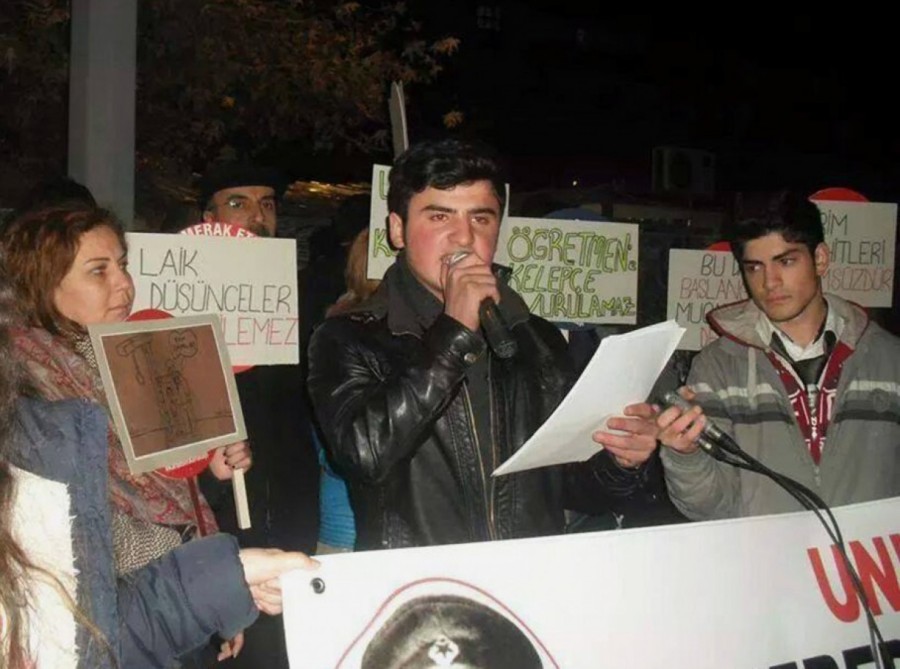 Erdogan might indeed not like it, but it was all factual, because not only has Erdogan’s government been mired in corruption scandals over the past year, with four ministers facing accusations of bribery and influence-peddling, but he has also been personally responsible for the on-going attempt to dismantle secularism in Turkey and setting that nation on the road to becoming yet another religious dictatorship.

As a side note, did you know that the number of students studying in state-run religious seminaries has grown from 63,000 in 2002, when Erdogan first came to power, to nearly 1 million today — a statistic the Turkish president celebrates, So yes that Turkish state today is indeed nurturing Islam, and that has never ever worked out well for any state. To spend up to 14 hours a week instilling religious nonsense into young minds instead of spending time teaching basic skills is indeed a recipe for the creation of a generation of religious lunatics and is a step on the road to a failed state.

He described Erdogan as “the thieving owner of the illegal palace.” Not long thereafter, he was taken into custody for allegedly insulting the president, which is a criminal offense in Turkey. Opposition lawmakers said this was part of “an environment of fear, oppression and threat” that has emerged after Erdogan’s more than a decade in power.

… The “illegal palace” mentioned by the student is Erdogan’s new home in Ankara, a sprawling neo-Ottoman structure with more than 1,000 rooms. It’s conspicuous for more than just its size: The palace replaces an older building once occupied by Ataturk.

As WorldViews discussed earlier, Erdogan is Turkey’s most influential leader since Ataturk, and is in some ways is rewriting his legacy–championing the country’s Islamic and Ottoman past that was long suppressed by decades of Ataturk-inspired secularism.

When the state is locking up 16 year old kids for the “crime” of publicly criticising the government, then that is indeed the death of a canary in the coal mine.

Will things change in Turkey?

Erdogan, whom we might also refer to as “Vladimir Putin Jr.”, is fast heading for extreme trouble. He might indeed in the past have successfully stoked up Turkey’s economy, but the good times are about to come to a crashing halt, according to The Financial Times (sorry, they want you to sign up to read that link), Turkey now “needs more than $200 billion of foreign financing a year, more than a quarter of gross domestic product, to maintain its current level of growth.”.

In the good times, the Arab states or Russia might have been willing and able, but if the current drop in oil prices is maintained, then nobody will be in a position to help. That reality, coupled with his human rights abuses ticking off the European Union (a big source of investment income), ensures that change will happen.