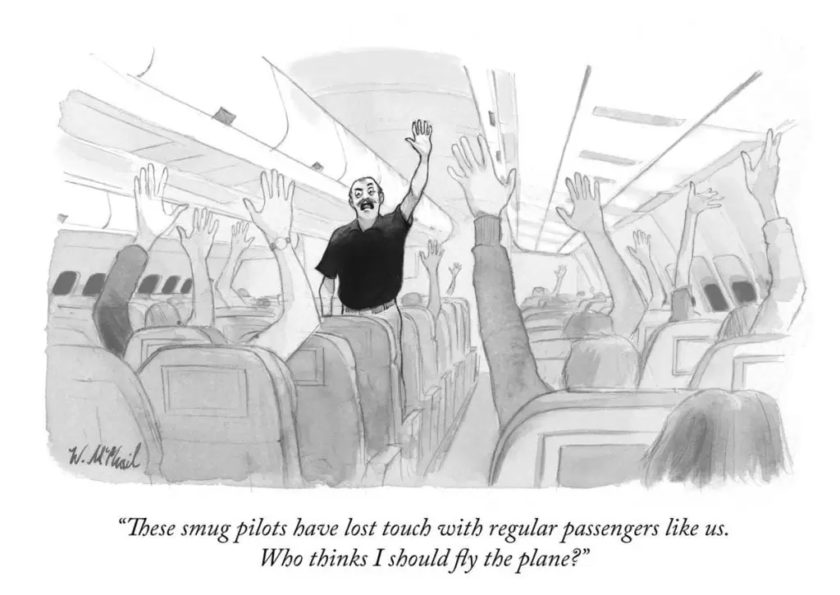 If you check out the wikipedia page on Dunning-Kruger, it describes it as follows …

The Dunning–Kruger effect is a cognitive bias in which people with low ability at a task overestimate their ability.

The concept is well-known and commonly deployed these days.

It all started with a paper published in 1999 by David Dunning and Justin Kruger. Their paper was titled “Unskilled and unaware of it: How difficulties in recognizing one’s own incompetence lead to inflated self-assessments.“

Within that paper they describe a cognitive bias that applies to all of us and not simply a small sample of the population. If asked to assess a skill, for example grammar, humour, or logic, then when specifically measured, people who were not very good at these had estimated that their skill was a lot greater than the actual measurement of that skill.

Translation: We often don’t know how much we don’t actually know.

To be wholly and completely clear, it is not about stupid people being too stupid to grasp just how stupid they are. Instead, it describes a common cognitive bias that is not just about “them”, but is common to all of us. If there is something we are not very skilled at, then often we tend to overestimate our ability in that skill.

This is what the study conducted by Dunning and Kruger measured.

Students were given a series of tests. They were then asked how well they thought they had done. Those assessments were then compared to the actual results.

What they found was an apparent unwarranted degree of overconfidence that we now know as the Dunning-Kruger effect.

There has been criticism.

In the 2016/17 timeframe two papers were published by Dr. Ed Nuhfer and colleagues. These were mathematical papers.

The issue they raised is that you can replicate the results of the original Dunning-Kruger 1999 paper using randomly generated data.

We all know and love the Dunning-Kruger effect. It just has to be real, we know people who are so stupid that they completely and totally fail to truly grasp the degree of their utter incompetence. These are individuals who rush forth with a certainty that they are an expert in something that they know very little about.

The 1999 Dunning-Kruger paper was never about stupid people being too stupid to grasp just how stupid they are. It was about all of us having a very distinct bias. There are things we know that we don’t know, so put that to one side. There are also things we think we know, but we don’t actually know. It is the latter that they were measuring.

Ignorant and yet full of confidence and sincerely believing themselves to be an expert in something they really don’t understand at all. This was very aptly demonstrated by Trump’s serious suggestion that we should inject bleach to cure COVID.

This is known as the “Overconfidence effect” and is well established.

The 1999 paper rested upon a mathematical analysis of the data they had collected. It has flaws. The Dunning-Kruger effect may not be a real bias.

We still do have the well-established Overconfidence effect.

Is this the end for the Dunning-Kruger effect?

Probably not. The term has become engrained into our cultural consciousness as a way to label what is actually the Overconfidence effect. We know that is real, and so examples of this will underpin the term “Dunning-Kruger”. The phrase will live on as a way to describe that.