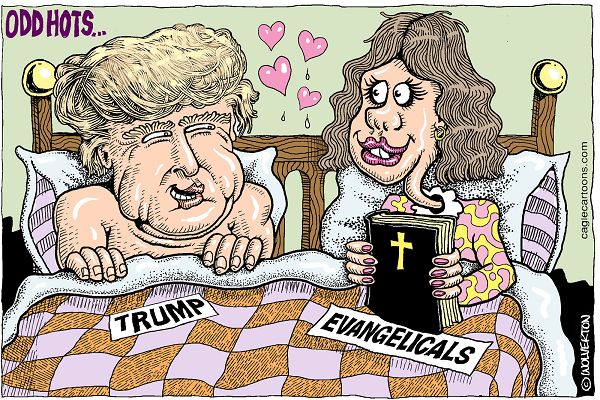 Traditionally you would perhaps expect that Evangelicals would be all about Love, Forgiveness, and helping the stranger, but within the US political arena there exists a bizarre and quite pervasive political-religious devotion to Trump amongst the vast majority of those that identify as white evangelicals. Regardless of all that has happened, as many as 71% still support him.

One commonly suggested answer is that it is not about him or his character, but instead is more of a focus upon Judicial Nominees, and that they are simply holding their noses and lining up behind him in order to achieve this hidden goal.

Apparently not. There are several sources that point towards the existence of a rather creepy cult like devotion to Trump himself by this demographic. Let’s look at each in turn.

Ms Stewart has a journalistic interest in evangelicals and so she has attended dozens of Christian nationalist conferences and events over the past two years in order to understand why a group that has historically claimed the high moral ground is suddenly abandoning all their previous self-righteous pretence and is now lining up behind such an odious and utterly immoral individual.

She starts off her opinion piece as follows …

The month before the 2018 midterms, a thousand theaters screened “The Trump Prophecy,” a film that tells the story of Mark Taylor, a former firefighter who claims that God told him in 2011 that Donald Trump would be elected president.

At a critical moment in the film, just after the actor representing Mr. Taylor collapses in the flashing light of an epiphany, he picks up a Bible and turns to the 45th chapter of the book of Isaiah, which describes the anointment of King Cyrus by God. In the next scene, we hear Mr. Trump being interviewed on “The 700 Club,” a popular Christian television show.

As Lance Wallnau, an evangelical author and speaker who appears in the film, once said, “I believe the 45th president is meant to be an Isaiah 45 Cyrus,” who will “restore the crumbling walls that separate us from cultural collapse.”

This is not a fringe idea, but instead amongst evangelicals is mainstream. The point that she is driving home as she expands upon this is that the idea that the Christian Right is simply another interest group working to achieve specific goals such as the appointment of Judicial Nominees is fundamentally wrong. Instead they are more akin to a political cult that prefers autocrats, and view Trump as a man appointed by God.

What she then builds up to is this conclusion …

This isn’t the religious right we thought we knew. The Christian nationalist movement today is authoritarian, paranoid and patriarchal at its core. They aren’t fighting a culture war. They’re making a direct attack on democracy itself.

They want it all. And in Mr. Trump, they have found a man who does not merely serve their cause, but also satisfies their craving for a certain kind of political leadership.

This second article has a specific focus upon the interview that highly influential Liberty University President Jerry Falwell Jr gave to the Washington Post. What is quite fascinating is that this very prominent evangelical appears to be promoting a Gospel that is more or less summed up as “The Poor can Fuck off”. It comes across as something akin to a Monty Python parody, but no, this is indeed his stance …

the evangelical leader claimed that it was a distortion of Christ’s teachings to suggest that because He taught love and forgiveness, “the United States as a nation should be loving and forgiving.” According to Falwell’s creative theology, Christ “went out of his way to say that’s the earthly kingdom, I’m about the heavenly kingdom,” and loving your neighbor as yourself only applies to the latter.

Ms Emba goes on to point out how very non-Christian (in the traditional theological sense) that all of this actually is. The precise term she deploys is “comically absurd”, and she uses the actual sayings of Jesus to expose this gross religious hypocrisy. What is clear is that we quite literally have a brutish immoral religious-political cult on our hands and not simply an interest group after a few specific things …

A disconcerting number of self-professed Christians have transitioned from the traditionally “evangelical” ambitions of spreading the gospel and forming a personal relationship with Jesus to spreading the gospel of wealth creation and fighting the “radical left.” National identity is what ties this body of believers together, and “the wall” has become its icon of hope, pushing the cross to the side.

Near the end of his interview, Falwell was asked if there was anything that Trump could do to endanger his support from evangelical leaders. His confident answer? “No.”

That’s what you call faith. But it’s definitely not Christian.

It is not new. History is littered with the blending of religion and politics. Religious ideas that are supposedly beyond being questioned are thrust forth as truth, and any that dare to question it all are deemed to be satanic. For example the total dominance by the minority Wahhabism cult in Saudi Arabia, Crusades, the supposed divine right of Kings, etc…

What we face now is more of the same. The essence of the claim is that Trump has been divinely appointed by God and so any criticism is not moral because it is opposition to God. George III was also supposedly divinely appointed as King hence beyond criticism. There was a little thing back then called the American Revolution that basically rejected that claim, and to be frank, all that opposition back then worked out rather well in the long term.

So how will this latest variation play out?

Many quite rightly have already distanced themselves from this political/religious cult, and many more will join them in an exodus from this lunacy. Some will naturally gravitate towards the Christian left, while others will completely abandon organised religion and join the Nones. The word “Evangelical” itself has also now been denigrated. By welding themselves to the Trump train, Evangelicals will decline even further by going over the cliff with him into the abyss of political irrelevance.

If you doubt this thinking, then perhaps I should point out that it is not a prediction, but instead is an observation of what is actually happening. Checkout the comments under the Washington Post article. Here are a few samples …

…I am an old white Christian, and Evangelical, and find the views expressed by Falwell, unchristian, troubling, and deeply disturbing.

…I can’t wait for the day when Jesus comes back and consigns every Evangelical who approves putting kids into wire cages to the most horrifying. most painful cages in Hell. They’ve earned it.

…I was raised in the Baptist church for a time, and I’m fairly conversant with the major themes of the Bible and NT. I don’t recognize Falwell’s version of Christianity, and I’m pretty sure I’m not alone.

… Having been raised in a Baptist church, and now 80 and still a sincere Christian, I can only assume that many of my fellow Evangelicals have skipped over the Gospel of Matthew, 25:31-46.  I have read the entire Bible annually for several dozen years (and faithfully before that), and see so much that these folks have “skipped over”, or simply ignored, that I cannot even say that I share their faith.  Theirs is NOT Christianity!

… Falwell is NOT a Christian. I refer to Falwell and his fellow evangelical leaders as “chri$tians.” They do not teach the word of God. They do not care what Jesus said or would do.

… The Evangelicals are truly lost.  Christianity without all those messy moral teachings.   The new god appears to be a dollar sign.

… As others have succinctly said, “Trump’s evangelicals are America’s Taliban.”

… After many years as a church goer with growing doubts, I finally confronted Christianity, saw it for what it really was, and put religion, as well as belief in god behind me.

… Falwell’s blinkered “faith based” perspective, replete with Trumpian haiography, on the other hand, is frank corruption of true Christian ideals. One wonders how many Liberty students have figured this out.