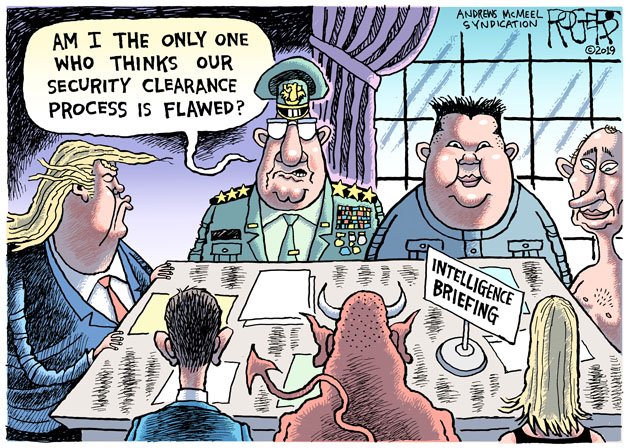 A blend of politics and religion can be wholly normal, reasonable and not weird. When presidential candidate Cory Booker was recently interviewed on a CNN town hall, he was asked how faith would influence him if he were in the White House. His answer was rather good …

So, I just want to say up front that I’m a person that often says that, “Before you tell me about your religion, show it to me in how you treat other people.” I was raised in a church where my mom taught Sunday school. I’ll never forget learning that verse, that faith without works is dead. And I’ll tell you what — I feel like I’m in church right now — and I’ll tell you what… I would rather hang out with a nice atheist than a mean Christian any day of the week.

In other words, it is possible to be both political and religious without being utterly obnoxious and intolerant.

Meanwhile, when it comes to the GOP, the party that has given a big welcome to bigots, xenophobes, racists, and religious fanatics, you are more or less guaranteed to encounter weirdness popping up on a daily basis.

The cult of Trump…

The Media is apparently a religious Cult

The world-ruler spirit is a false prophet. Remember, there’s principalities, powers, and rulers of the darkness. The world-ruling prince that reaches from the BBC and CNN all over Asia, all over Europe, Central America and South America and Africa, it’s the voice of the false media, and everywhere I go in the world I have to listen to the torment of it, 24 hours a day. It’s a lying voice, trying to support an anti-Christian agenda, and it’s a counterfeit spirit …

(The irony here is truly awe inspiring. This is a guy who more or less worships Trump as the chosen one of God, a new Messiah)

David Barton appears to have joined the anti-vaxx crowd: …

“There’s a whole bunch of people that do not like their kids participating in vaccinations for several reasons. One is that so many vaccinations now contain parts of aborted fetuses. So, just as a matter of conscience, ‘I don’t want that in my kid.’ And then there’s so many bad things happening from the newer vaccinations. We think we have to have a vaccination for everything now. If somebody gets sick, we’ve got to create a vaccination. And that’s just not accurate.”…

(We could really do with a vaccination for stupidity. Unfortunately, while we can fix ignorance with education, stupidity is permanent)

…criticized for the sectarian, political, triumphalist prayer she offered last Monday to start a session in which the first Muslim woman elected to the state House was to be sworn in….”…Jesus we’ve lost sight of you. We’ve forgotten you, God, and our country. And we’re asking you to forgive us, Jesus …every knee will bow and every tongue will confess, Jesus, that you are Lord”

(She has basically turned prayer into a political weapon)

Dave Daubenmire thinks that the First Amendment gives him the right not to have to pay taxes.

(This is not going to go well for him if he sticks to this, and I hope he does. Creationist Kent Hovend also believed that he should not pay taxes – In 2006 the IRS took a different view and so he want to jail)

Anti-choice activist Abby Johnson appeared on the radio program hosted by radical right-wing pastor Kevin Swanson, who openly declares that the Bible calls for gay people to be put to death.

There is just so much more to choose from, and remember this is all from the last 7 days …

Sadly, I’m only scratching the surface there. There is lots more of the same out there.

One thing is certain. It will be lot’s more of the same during the following week.