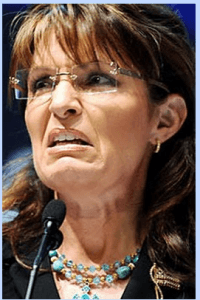 Sarah Palin is currently playing the victim at the moment and claims that depraved liberals are blaming her for mass murder. As I’m sure you know, she had the poster with the names of leading Democrat politicians who supported health care reform, including tragically, Gabrielle Giffords, with a sniper target over them. If that was all there was to it, then it could quite rightly be argued that it was indeed being politicized by being blown out of context. The Republicans could simply fire back with the 2008 quote from Obama, when he said, “‘If They Bring a Knife to the Fight, We Bring a Gun’?” … but its just not that simple.

Palin actually has quite a long history of violent political rhetoric. There is a very good breakdown of it here … and what follows is a key extract …

… I don’t think Sarah Palin is to blame for a crazy person shooting a Democratic representative who represented a government he thought was “treasonous”. She didn’t actually pull the trigger, after all. But she has deliberately and with malice aforethought created an atmosphere of hate, division, fear and paranoia. An atmosphere of white nationalism that according to law enforcement officials, it appears this young man embraced.

Such atmospheres are magnetic pulls for those prone to insanity. And it’s precisely for this reason that political leaders should not engage in violent rhetoric. Ms Palin knows this. Ms Palin was called out for inciting violence in Alaska. Ms Palin was called out for inciting violence against then Senator Obama, his wife and children during the 2008 campaign season. The Telegraph UK reported that the Secret Service asked her to walk it back as her rhetoric was causing an increase in death threats against the Obama family but she refused.

“The attacks provoked a near lynch mob atmosphere at her rallies, with supporters yelling “terrorist” and “kill him” until the McCain campaign ordered her to tone down the rhetoric. But it has now emerged that her demagogic tone may have unintentionally encouraged white supremacists to go even further. The Secret Service warned the Obama family in mid October that they had seen a dramatic increase in the number of threats against the Democratic candidate, coinciding with Mrs Palin’s attacks.”

And here is where I do hold Sarah Palin accountable for her irresponsible, selfish and cynical behavior. Ms Palin has been aware of the consequences of her words for a long time now. Ms Palin used to give out public statements as a governor that called for a “backlash” against “asinine” citizens who filed ethics complaints against her. Ms Palin has seen the death threats her rabid, unstable “fans” have issued to anyone who dared to call Ms Palin accountable, including Senator Yee of California whose only crime was to ask the university where Ms Palin was speaking to disclose what it was paying her. For this, he received heinous death threats, faxes of a noose around his neck and President Obama’s neck, and ugly, vile disgusting rhetoric dripping with gutter hate only fit for the mentally unstable. But those are Ms Palin’s bestest fans.

So what have others had to say about all of this? Well here is a collection of tweets (collected by stanfill here) …

If a Detroit Muslim put a map on the web with crosshairs on 20 pols, then 1 of them got shot, where would he be sitting right now? Just asking. – Michael Moore

A physician cannot treat an illness s/he willfully refuses to diagnose. Violent political rhetoric is not fault of “both sides.” – Tom Tomorrow

Inspiring that our media pundits are so quick to reach for “everyone’s to blame” when no conservative events have been terrorized by gunmen. – Jeffrey Feldman

Jared Lougnner: drug arrests, too crazy for Army or for college or anythign else, but getting a legal gun? No problem. – Tom Tomorrow

I find it abhorrent that Sarah Palin would stoke the coals of extremism with dangerous messaging, then delete it when something bad happens. – Jason Pollock

Sure, Sarah Palin didn’t pull the trigger. But then, neither did Charles Manson. – auntbeast

Christina Taylor Green was Born on September 11, 2001, and killed today by terrorist fuckheads in Arizona. Irony much? – geeksofdoom

I’ll say this, if your first instinct after hearing about a tragedy is to scrub yr websites, you have a problem as a political movement. – digby56

CNN’s Dana Bash says “this could be a wake-up call.” THIS … ? The whole Tea Party, carrying guns to rallies WASN’T?? – hololio2

Teaparty asses have been asking for this to happen, and how they’re pissed off that we’re calling them out on it. – TLW3

STOP SAYING”BOTH PARTIES”!! The Left has not been advocating Violence. @CNN assholes. – YatPundit

The rhetoric of violence needs to be stopped now … by all parties … but as for Sarah Palin and the other right wingnut shock jocks, they are in an entirely different league, and need to be bounced out of politics altogether.