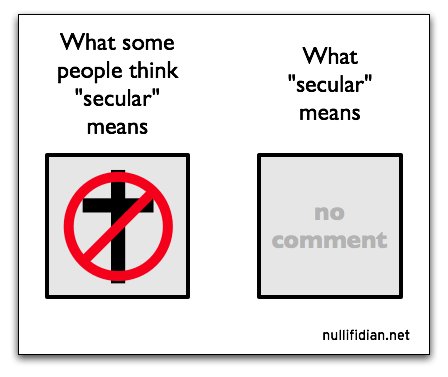 Secularphobia is one of those phobia words that rather a lot of people have a bit of a phobia about (logo-phobia perhaps). Such words do convey and describe fears that are quite real. Some we are familiar with …

… and so I introduce to you “secularphobia”. This is quite real within US society. If you doubt that, then consider the observation that many politicians find it necessary to wear a religious mask. Barney Frank, an openly gay member of congress, kept the fact that he was not religious a secret until he finally retired.

Would the public vote for a non-religious president today? Actually this one is not so bad, while in the past it would have been a resounding “no”, a recent poll revealed that 58% would vote yes if their party selected an atheist candidate for election, so that leaves a roughly 40% chunk of the public suffering from secularphobia.

How about joining the boy scouts?

It is now just fine to be a member if you are gay since 2013. The only remaining group that is still banned from the boy scouts are the non-religious. Yes really, if you don’t embrace religious superstitions then you are banned.

What is going on, why all the Secularphobia?

You can’t help but wonder what is going on inside the heads of those who will happily discriminate. The “crime” is that some people are simply non-religious. Why would they do that?

It perhaps all comes down to several things …

What is also rather interesting is this observation.

The fact that it is like this is quite frankly absurd.

Being discriminated against for simply being rational and refusing to embrace ideas that don’t have a jot of evidence is indeed crazy. This is not just at a cultural level. There are still eight states within the union that mandate officeholders must have a religious belief … yes really.

Alas, homophobia might indeed be passing, but secularphobia is sadly still thriving.