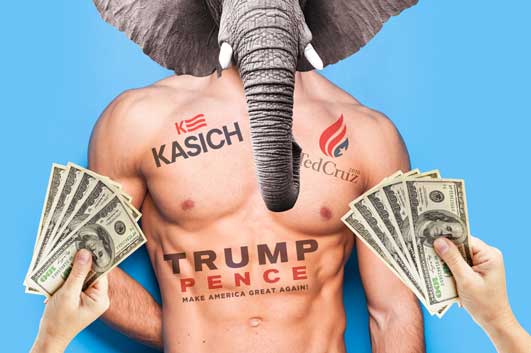 As you might be aware, the Republican National Convention in Cleveland passed what is perhaps the most hostile anti-LGBT platform ever seen in its history. With that in mind you might perhaps anticipate that when it town all these white straight anglo-saxons would have caused the normal trade being plied by local gay sex workers to completely dry up, but hey guess what, it turns out that it was quite the opposite.

Aware of the rather blatant hypocrisy that is rampant within this political community, the New York Post sent reporters out to gather the facts and this is what they discovered …

Male escorts are making crazy money at the RNC

It’s been a great week for gay escorts in Cleveland.

Male prostitutes contacted by The Post said business is booming and Republican National Convention attendees — most of them married — are clamoring for their services.

“Most of them were first-timers. You could tell they were nervous, but once they became more comfortable, they seemed to be having a good time.”

Another escort said he had already earned $1,600 since Monday — over six times the amount he usually makes.

“I normally only make $200 to $300, but I’ve been seeing lots of guys in hotels downtown,” he said, noting the boom in business near the Quicken Loans Arena.

The clientele has included mostly married white men between the ages of 40 and 50, said another escort who’s seen eight johns so far.

That is just one source, do we have others?

I’ve seen a few suggest that this is simply political hype manufactured to discredit the RNC, so we should perhaps question how credible it is and see if we have any other way of checking this out. So do we?

Yes we do, somebody went through Craigslists and wrote up what they found …

… A Westside resident offered himself to manly, anti-abortion visitors as a “RNC fucktoy.” But it wasn’t all Clevelanders trying to get some fresh meat while the pickings were plentiful—some guys were in town for the convention and figured it was a good time to find some “young ass” for a bit of discrete man-boy love.

Then there were the partisan ads. One “Democrat looking to suck Republican cock” stated that he was free all week. One even appeared to use the name of vice presidential pick Mike Pence as a verb, suggesting a game of “truly fudge Pencing with DL [down-low] Repubs.” We don’t know what that is, exactly, but it’s probably big in Pence’s gubernatorial empire of Indiana.

Another “athletic” and “bearded” m4m made his interests crystal clear: “I’m looking for GOP tops. I’m quite the opposite, a DNC bottom.” He noted the difference in tone between the two political parties as well.

So yes, this is not just about one media article, because you can surf on over to craigslist and see all the ads for yourself.

This is really not a Surprise

Why is a group that is so vocally and politically anti-gay totally mesmerised by it all and secretly indulging in gay sex, what exactly is going on?

Studies have demonstrated that homophobia is quite often an indication that an individual is more likely to be gay.

A 2012 study by the University of Rochester discovered that Homophobia is more pronounced in individuals with an unacknowledged attraction to the same sex and who grew up with authoritarian parents who forbade such desires.

“Individuals who identify as straight but in psychological tests show a strong attraction to the same sex may be threatened by gays and lesbians because homosexuals remind them of similar tendencies within themselves,” explains Netta Weinstein, a lecturer at the University of Essex and the study’s lead author.

“In many cases these are people who are at war with themselves and they are turning this internal conflict outward,” adds co-author Richard Ryan, professor of psychology at the University of Rochester who helped direct the research.

The paper includes four separate experiments, conducted in the United States and Germany, with each study involving an average of 160 college students. The findings provide new empirical evidence to support the psychoanalytic theory that the fear, anxiety, and aversion that some seemingly heterosexual people hold toward gays and lesbians can grow out of their own repressed same-sex desires

It really should not be a surprise. Modern Republicanism has more or less abandoned their core fundamental principals and is now instead a party that survives by pandering to a rather diverse collection of different interest groups. The result is a platform that is now basically anti-science, openly racist, very homophobic, and also committed to officially promoting specific strands of religious belief in the public square. The basis for most of this is neither evidence-based, nor fact based, but is instead designed to pander and manipulate those that have opted to take up residence inside their tent, so adding gross hypocrisy into the mix should not be a problem at all.

It’s my new favourite word to sum all this up. Basically “proctocracy” is not just Government by “arseholes”, but is perhaps also a reference to the place where they pull all the facts from that they need to justify their platform policies.