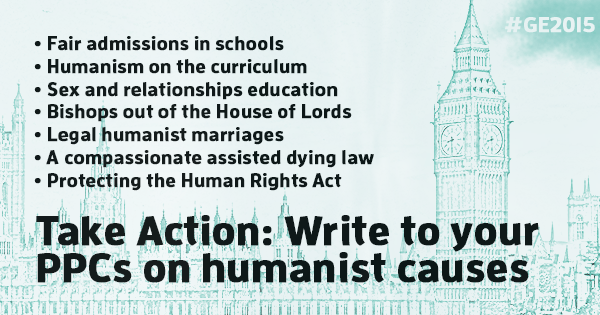 Hey now this is interesting, the British Humanist Association has set up a facility that enables you to automatically send a series of questions to your local candidates.

Now that is simplicity (link to it all coming up soon)

First, to those of you not in the UK, you might be wondering what this is all about. Well the story here is this, we are about to have a general election in the UK (next month), and so election rhetoric is moving into warp factor 9, so much so, that you could hook up a major city to the political spin doctors and power it.

So what is in the BHA letter?

Given that the general election is fast approaching, it is important I know the views of the people I may potentially vote for. I am therefore writing to you as your potential constituent to ask your position on policy matters which, as a non-religious person, are extremely important to me. I would appreciate a reply stating your position on the following questions.

I hope that you share my views on the issues outlined above, which are not only widely supported by the British public, but are necessary to protect the basic and fundamental human rights that are enshrined in both British and international law. It is vital that such discriminatory practices are ended, hence the importance of discovering your position on these issues at such a crucial political juncture.

Hey this is Cool, I’m in, where is the link?

So what will happen?

Well so far I have received two auto-replies.

The Conservative reply was this …

Thank you for your email.

You should know that Parliament has now been dissolved and electoral law says that I am no longer allowed to act on behalf of constituents.

During the election period I will not have access to my office, parliamentary diary, staff or the resources to receive and deal with replies.

Should I be fortunate enough to be re-elected as your MP, I will be more than happy to take up your case after 7th May.

Well that’s a tad surprising, in the white heat of the election, it is essentially a non-response. Will anything follow that? (probably not).

The other was the Labour reply …

thank you for taking the time to write to me, I answer every email as soon as possible but that sometimes involves a delay as I write all my own letters, blogs, petitions and social media (and that is when I am not out campaigning or meeting constituents)

Oh wow, now that is a lot better. It is of course still a non-reply, but strikes me as one that is a heck of a lot more friendly.

As for the other two, The Lib Dem Guy, and the Green Party Guy, no auto reply just a stunning silence, which perhaps in one way speaks volumes.