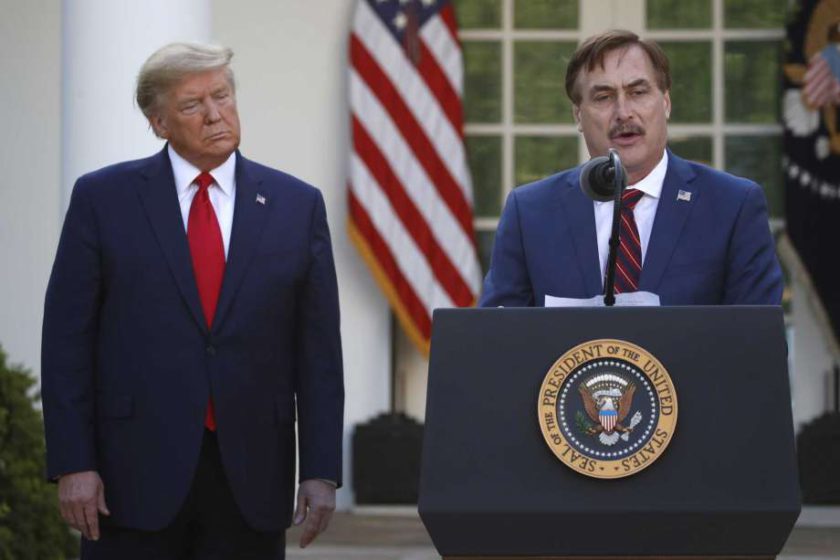 It finally happened, and it was of course inevitable. Mike Lindell, the COE of My Pillow and the alt-right Mario, has had his wish granted, Dominion listened to his plea “Please sue me, Dominion” and they obliged.

A Brief History of the Mr Pillow Saga

In Jan 2021, Dominion issued a legal warning to Mike Lindell advising that they would sue him for spreading baseless election fraud conspiracy theories.

Mike Lindell responded by mocking them. Literally pleading with them “Please sue me, Dominion.” That was crazy, they were not bluffing and playing politics. They have a corporate interest in reestablishing their reputation. His promotion of blatant lies was threatening their very existence.

Not wholly unrelated, but also back in January Mike Lindell was permanently banned from twitter for the blatant promotion of false information, and several stores also stopped carrying his products. His good buddy, Evangelical “intellectual” Eric Metaxas claimed that this was just like Nazi Germany in the 1930s.

Er… that’s a hard no Eric, it was due to Lindell’s obsession with spreading baseless right-wing conspiracy theories about the election. He had in effect rendered himself utterly toxic. All we can really say to Eric is that we hereby invoke Godwin’s Law.

Next came his promise of a three-hour documentary which he claimed would cite all the evidence. When released in early Feb it was everything you would expect, except worse. Others took the hit for the team and reviewed it, and yes, it really was a big pile of nonsense. It also came with a huge in-your-face disclaimer when broadcast on OAN. They could very clearly see the litigation risk. When you promote Conspiracy theories that libel billion dollar corporations in a big way, then there really will be legal consequences. OAN may still face litigation anyway.

And so now the latest news is that it has indeed happened, the Lindell suit has been launched.

The company is seeking about $1.3 billion in damages for Lindell’s numerous unfounded public statements by allies of former President Donald Trump that Dominion rigged its machines in favor of Joe Biden in the 2020 US presidential election.

The 115-page lawsuit filed Monday in Washington, DC, cites Lindell’s media appearances and social media posts pushing what they called the “Big Lie” about Dominion’s machines — including a two-hour film that aired on OAN and was filled with falsehoods about voting irregularities.

In the lawsuit, Dominion writes that Lindell “sells the lie to this day because the lie sells pillows” citing promotional discount codes on MyPillow’s website, including “FightforTrump,””Proof” and “QAnon.”

Dominion really had no choice here …

“Despite repeated warnings and efforts to share the facts with him, Mr. Lindell has continued to maliciously spread false claims about Dominion, each time giving empty assurances that he would come forward with overwhelming proof,” said Dominion CEO John Poulos in a statement.

Poulos added that Lindell’s statements “caused irreparable harm to Dominion’s good reputation and threatened the safety of our employees and customers.”

Lindell promised his followers proof, but instead he “delivered absolute nonsense and fake documents sourced from the dark corners of the internet,” said Dominion legal counsel Megan Meier, Partner at Clare Locke LLP, in a statement, adding that Lindell “needs to be held accountable for defaming Dominion and undermining the integrity of our electoral system all the while profiting from it.”

The suit vows that “through discovery, Dominion will prove that there is no real evidence supporting the Big Lie. Dominion brings this action to vindicate the company’s rights, to recover damages, to seek a narrowly tailored injunction, to stand up for itself and its employees, and to stop Lindell and MyPillow from further profiting at Dominion’s expense.”

How has Lindell responded?

Basically with his usual bluster. He told the Wall Street Journal he was “very, very happy” that the Dominion lawsuit had gone ahead.

“I have all the evidence on them,” he said. “Now this will get disclosed faster, all the machine fraud and the attack on our country.”

If his “evidence” is the same “evidence” contained in his “documentary”, then he is indeed in deep trouble.

What can I say except to perhaps observe that he has worked very hard to get this, and so now he can sit back and bask in warm glow generated by all the legal heat he has stirred up.

Actions really do have consequences.