Sometimes the degree of stupidity exceeds all expectations.

In Pakistan, Mosa Khan, a child, has been accused along with 30 other people of planning  murder, threatening police and also interfering in state affairs. So is this some teen who has gone rogue?

Nope, here he is in court … 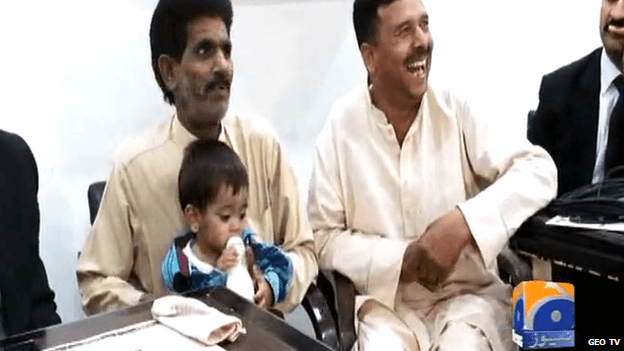 Yes, the accused is 9 months old.

Baby Muhammad Mosa Khan is one of more than 30 people facing charges after a police raid to catch suspected gas thieves in the city of Lahore, The News website reports. Police say the suspects tried to murder security officers by pelting them with stones. But the Times of India newspaper quotes the infant’s father as saying the group was protesting against an electricity shortage.

The infant appeared in the courtroom sitting on his father’s lap and clasping a bottle. He was given bail and the case has been adjourned until 12 April

This is of course highly unusual, so much so that …

The murder charges against a baby have alarmed Punjab’s Chief Minister Muhammad Shahbaz Sharif. He has asked for clarification from the province’s inspector-general of police and demanded “stern action” against the officials who registered the case.

What is Going on?

Why would the local police behave like this? – especially in the context of Pakistan’s minimum age of criminal responsibility being 12 (It was raised from 7 to 12 last year).

The problem is this – the naming of family members in police reports is a common tactic employed by complainants in order to exert pressure on parties with whom they were involved in a dispute. Naming babies, er no, that is not common, but other innocent family members, yes that is indeed quite common. When you have a vendetta rolling, and everybody accusing everybody else, then they all get picked up and chucked in jail.

The key problem is that the legal system operates via ‘first information reports‘ (FIR). It theory it should work, but too much weight is given to the allegations made by accusers, and when a FIR is verified to be factually incorrect then there is no comeback against the accuser for making a false accusation.

A climate in which you can file a complaint and then without any evidence have people locked up prior to an investigation is one that is open to gross abuse and will lead to infringements of basic human rights.

In summary – it should be

And not as practised in Pakistan …

But to be frank, the above is the least of the problems with the legal system in Pakistan, a far bigger issue is the Blasphemy law. There just a whisper is enough to destroy somebody even if they are totally innocent, those accused of blasphemy are subject to immediate incarceration, and most of those accused are denied bail to forestall mob violence. It is common for those accused of blasphemy to be put in solitary confinement for their protection from other inmates and guards. Even being proven innocent at the end of it all does not help. Like those who have served a sentence for blasphemy, those who are acquitted of blasphemy usually have to go into hiding or leave Pakistan, because even a hint of this sticks.

That last observation is perhaps not simply a reflection of a problem in the legal system, but reveals a fatal flaw in the prevailing strand of Islamic thinking that prevails. The system may indeed successfully stamp all over the rights of other minority beliefs, and other variations of islamic thinking that are also deemed by some to be blasphemy, but not just because of bad laws, but also because of the gross intolerance that the majority belief nurtures in minds.

Locking up innocent people is never a good idea, but also attempting to legislate against thinking the wrong thoughts is an abhorrent abuse of rather basic human rights – namely the freedom to believe whatever you wish to believe, and so when you get into the game of throwing people in jail on almost a whim, then you set the stage for many tales of gross injustice to be played out over and over again.

In the end however, it is not going to be corrected by getting rid of bad laws and putting in place good laws. That of course will help, but the real solution is for people to be persuaded to behave decently, practise tolerance, and since the motivation to do the opposite is the widespread embrace of bad ideas, then those bad ideas need to be robustly criticised and have a spotlight thrown upon them.