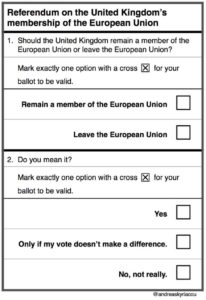 It appears to be starting to dawn on many that it is distinctly possible that the UK is not actually about to quit the EU even if every politician going is parroting “the people have spoken, we must respect that” line.

A comment has appeared under a Guardian article that is now widely being shared, and also highlighted as a Guardian Pick, reads as follows …

If Boris Johnson looked downbeat yesterday, that is because he realises that he has lost.

Perhaps many Brexiters do not realise it yet, but they have actually lost, and it is all down to one man: David Cameron.

With one fell swoop yesterday at 9:15 am, Cameron effectively annulled the referendum result, and simultaneously destroyed the political careers of Boris Johnson, Michael Gove and leading Brexiters who cost him so much anguish, not to mention his premiership.

Throughout the campaign, Cameron had repeatedly said that a vote for leave would lead to triggering Article 50 straight away. Whether implicitly or explicitly, the image was clear: he would be giving that notice under Article 50 the morning after a vote to leave. Whether that was scaremongering or not is a bit moot now but, in the midst of the sentimental nautical references of his speech yesterday, he quietly abandoned that position and handed the responsibility over to his successor.

And as the day wore on, the enormity of that step started to sink in: the markets, Sterling, Scotland, the Irish border, the Gibraltar border, the frontier at Calais, the need to continue compliance with all EU regulations for a free market, re-issuing passports, Brits abroad, EU citizens in Britain, the mountain of legistlation to be torn up and rewritten … the list grew and grew.

The referendum result is not binding. It is advisory. Parliament is not bound to commit itself in that same direction.

The Conservative party election that Cameron triggered will now have one question looming over it: will you, if elected as party leader, trigger the notice under Article 50?

Who will want to have the responsibility of all those ramifications and consequences on his/her head and shoulders?

Boris Johnson knew this yesterday, when he emerged subdued from his home and was even more subdued at the press conference. He has been out-maneouvered and check-mated.

If he runs for leadership of the party, and then fails to follow through on triggering Article 50, then he is finished. If he does not run and effectively abandons the field, then he is finished. If he runs, wins and pulls the UK out of the EU, then it will all be over – Scotland will break away, there will be upheaval in Ireland, a recession … broken trade agreements. Then he is also finished. Boris Johnson knows all of this. When he acts like the dumb blond it is just that: an act.

The Brexit leaders now have a result that they cannot use. For them, leadership of the Tory party has become a poison chalice.

When Boris Johnson said there was no need to trigger Article 50 straight away, what he really meant to say was “never”. When Michael Gove went on and on about “informal negotiations” … why? why not the formal ones straight away? … he also meant not triggering the formal departure. They both know what a formal demarche would mean: an irreversible step that neither of them is prepared to take.

All that remains is for someone to have the guts to stand up and say that Brexit is unachievable in reality without an enormous amount of pain and destruction, that cannot be borne. And David Cameron has put the onus of making that statement on the heads of the people who led the Brexit campaign.

That is quite frankly fascinating, and I should add is also just speculation.

Apparently there are also rumours that Mr Cameron advised his aids, “I’m not sorting this shit out”, just after he resigned, and that is wholly understandable because anybody who actually pulls the trigger and invokes article 50, is indeed supping from a poisoned chalice.

With a new Conservative leader to arrive in a few months, and potentially a new Labour leader as well, plus the Lib Dems already making it a pledge for the UK to be in the EU and to rejoin if necessary, we are clearly in a position where …

It was a non-binding Referendum, so in reality, yes Parliament can. There is also plenty of evidence that they would be wholly justified in doing so …

However, something that is even more compelling and simply cannot be ignored is the petition now running on the official UK Government and Parliament website that demands that this …

We the undersigned call upon HM Government to implement a rule that if the remain or leave vote is less than 60% based a turnout less than 75% there should be another referendum.

This is not a simple click petition, you have to provide your name, an email address, and a UK post code. You then get an email and once you click inside that, it has been signed.

So how many have now signed?

Over 3.5 million have and that makes it the largest petition of its kind in history.

Oh but that is not all, now comes the 2nd real kicker. The petition was started by a vote LEAVE campaigner who was quite sure that they were going to lose, and as you might imagine, is a tad ticked off about it being hijacked by very unhappy REMAIN voters.

Meanwhile, we do also have another petition by James O’Malley (whom I do personally know), that asks …

As a further aside, you might be wondering where the chancellor is, he appears to have vanished since Thursday. Oh come now, the subtle hint is in his job title. The vote quite seriously buggered up the economy, the currency, and the stock market, and that has been more than a little bit distracting hence any and all public PR is wiped out of his diary. He might indeed be a bit of a plonker, but at least he does do his job when a crises beckons.