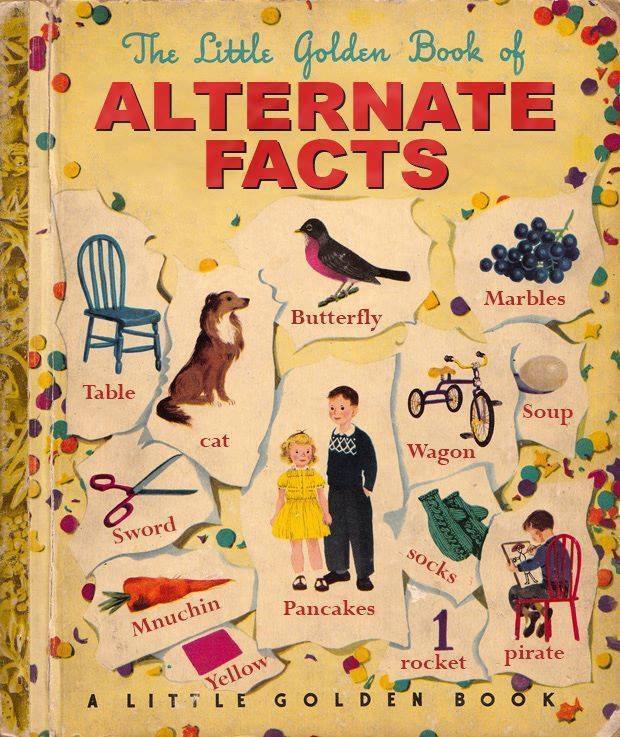 As you are most probably aware by now, the new buzzword of the moment is “Alternative Fact”. It arose when Kellyanne Conway, a Trump adviser, was challenged on “Meet the Press” last Sunday about an official White House statement issued the previous day.

Monday saw the first official White House press briefing, but last Saturday the new White House press secretary, Sean Spicer stood at the lectern within the White House briefing room and proceeded to utter some blatantly obvious lies. He issued a monolog in which he accused members of the press of “deliberately false” inaugural coverage, and then refused to take any questions. The essence of the claim is that the press falsely reported a rather small crowd size.

Mr. Spicer said that 420,000 people had used Washington’s Metro system on Friday and that 317,000 had used it on the day of Barack Obama’s inauguration four years ago. Metro officials reported 570,557 subway system entries on Mr. Trump’s Inauguration Day, compared with 782,000 on Mr. Obama’s.

The next day White House senior adviser Kellyanne Conway appeared on “Meet the Press”. When challenged about this official statement, she explained that Mr. Spicer’s falsehoods were simply “alternative facts.”.

No, you don’t need to go look it up, because the term we use to describe this is “lying”.

There is nothing subtle here, if you compare photos taken at Obama’s inaugural, everybody can see that the crowd size was vast when compared to the turnout at Trumps. On Saturday there was a Woman’s March of protest against Trump, and the turnout for that also far exceeded Trumps actual Inauguration on the Friday.

However, you don’t need to just look at pictures, instead you can count the actual number of DC metro rides and compare them so this all goes way beyond opinion and estimates …

Please for the love of all that is holy make sure this is retweeted 100 billions times. #spicerfacts #alternativefact pic.twitter.com/oFZlqUSiZY

What however is truly beautiful about this is what has now happened. Basically a good chunk of the entire human population on the planet is laughing at Mr T.

Congratulations everyone! #SpicerFacts has become the most popular hashtag ever, with 1.5 billion tweets!

Why would the new administration do this?

Since day one of Trump’s campaign, lying has been a strategy that has worked. Standing up and boldly proclaiming stuff that is at odds with reality has been a winning strategy, so why should we expect anything different. It won the election for him, so we should anticipate that this strategy will simply continue.

The net effect is that Mr Trump has no credibility. Nobody will believe anything he has to say about anything. How can his administration possibly function in such a climate of disbelief?

We have seen what happens. I simply need one phrase to illustrate that – “Weapons of Mass Destruction” – and you will them immediately remember how Mr Bush completely blew the credibility of his entire administration.

Well yes, going to war on the basis of a lie is not in the same league as the size of a crowd. What is perhaps truly telling is the willingness to lie about something that is simply not important. When it comes to the things that really matter, then why should or could we ever accept anything that is said?

Is this the a New Trend or a blip?

It might perhaps be tempting that consider this an abnormal event and that the press room will soon settle into business as usual by dispensing with such tactics.

Personally I’d recommend not holding your breath on that one. Past experience is always an indicator of future behaviour, so so we need to remember that from day one of Trumps campaign, “truth”, “honesty”, “integrity” and “reliability”, have been missing.

Another additional point to note is who is being nurtured. Jim Rutenberg, writing in the New York Times, has pointed out …

On Thursday, Jim Hoft, the founder of The Gateway Pundit, said the White House was giving his site an official press credential. The Gateway Pundit promoted hoaxes such as one alleging that protesters in Austin, Tex., were bused in by the liberal donor George Soros. (The originator of that story told The New York Times that his assertions were not supported by fact.)

The White House has not confirmed that it will credential Gateway Pundit, but Mr. Hoft’s announcement stoked anxiety among traditional reporters that the new administration will pack the pressroom with sympathetic organizations willing to promote falsehoods — or, perhaps, “alternative facts.”