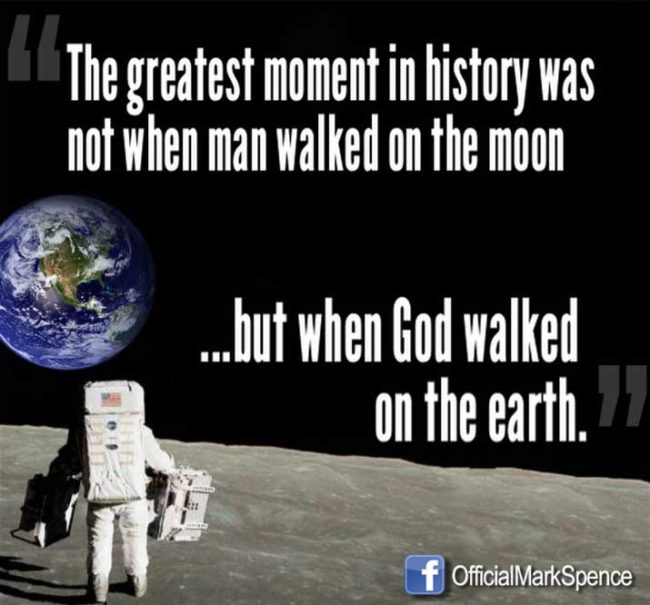 The greatest moments image (above) has popped up on Facebook. No doubt you will guess that it comes from an evangelical believer named Mark Spence – if curious, you can find that original Facebook posting here. You know that the image will of course provoke, and so those that believe all give it a thumbs up and those that don’t will simply face palm, and yes, the tit-for-tat comments are exactly what you might anticipate them to be.

This does all open up a rather interesting question. If we ask a question such as “What are the greatest moments in Human History?” then what does the term “greatest” actually mean, and how do you even begin to measure that?

Clearly how you might begin to answer it will potentially reveal a great deal about yourself.

I’ll give it a go, but first let’s take a pass at the meme.

What we discover via the image is rather a lot about Mr Spence’s specific religious beliefs, but nothing at all about what is historically factual. Yes, Christians claim Jesus was god, but that is a religious claim that has no evidence that verifies it as a historical fact. It is perhaps a topic to expand upon another time, so I’ll keep this brief.

What do we actually have?

The very earliest gospel, Mark, was written in roughly AD 60 (more probably 65), and that is many decades after the events it describes. It is religious PR, and describes what was believed to be true. In essence, it is not evidence that verifies a religious claim, but is instead itself a religious claim.

So was there ever an individual from Galilee wandering about claiming to be a Jewish messiah that ended up being put to death by the Romans?

Actually yes, there are several who fit that specific description, for example Judas of Galilee or Menahem ben Judah. But to then make the leap that one of these or some other instance of the same was an incarnation of a supernatural entity that created the entire universe, all 2 trillion galaxies, each with hundreds of billions of stars … er … no … seriously, just no.

Yes, I get that people do sincerely believe this hence Mr Spence’s meme, and I truly grasp that because I also once believed it. I no longer do due to the complete lack of any objective evidence that it is true.

Let’s get back on topic.

I’ve had a go at composing a list, but it will be in no way complete. Others may indeed come up with far better suggestions (please do feel free to drop suggestions into the comments).

So how would I define greatest moments?

The ability to communicate complex thoughts and ideas to others is something quite profound. Other species do vocalise, but we modulate the sounds we make vocally and utilise that modulation to convey meaning.

Actually, when I use the term “Spoken word”, I may in fact not be wholly correct in truly capturing this. The pure essence of what I’m talking about here is our ability to communicate complex ideas. That core concept is modality-independent. It need not be vocal at all. People born deaf are just as effectively functional and instead use sign language. We do not know of any other species that can switch to a completely different mode of communicating like this if the default vocal mode is not available.

A spoken language is also quite probably not something unique to our species. Most specialists now consider that the Neanderthals had similar vocal abilities. The argument for that is that their hunting and tool making would have been rather challenging without some means of vocalising ideas.

From language flows so much. It is a conduit for hopes, dreams, visions, stories, and newer better ideas.

What is also rather interesting about it all is that if you analyse the existing diversity and variation of language today, then you discover something truly fascinating. Here is a small snippet from the “Origin of Speech” wikipedia page …

The current worldwide pattern of phonemic diversity potentially contains the statistical signal of the expansion of modern Homo sapiens out of Africa, beginning around 60-70 thousand years ago. Some scholars argue that phonemic diversity evolves slowly and can be used as a clock to calculate how long the oldest African languages would have to have been around in order to accumulate the number of phonemes they possess today. As human populations left Africa and expanded into the rest of the world, they underwent a series of bottlenecks — points at which only a very small population survived to colonise a new continent or region. Allegedly such population crash led to a corresponding reduction in genetic, phenotypic and phonemic diversity. African languages today have some of the largest phonemic inventories in the world, while the smallest inventories are found in South America and Oceania, some of the last regions of the globe to be colonized. For example, Rotokas, a language of New Guinea, and Pirahã, spoken in South America, both have just 11 phonemes,[82][83] while !Xun, a language spoken in Southern Africa has 141 phonemes. The authors use a natural experiment — the colonization of mainland Southeast Asia on the one hand, the long-isolated Andaman Islands on the other — to estimate the rate at which phonemic diversity increases through time. Using this rate, they estimate that the world’s languages date back to the Middle Stone Age in Africa, sometime between 350 thousand and 150 thousand years ago. This corresponds to the speciation event which gave rise to Homo sapiens.

The next major step, a huge moment in human history, was the written word. It enabled ideas to move beyond one single life and instead to reach out beyond the language ability of one individual.

I use the term “Written word” to describe “True writing”. This is where you write down the spoken word in a manner that enables a reader to reconstruct the original spoken word. Prior to this true writing there was proto-writing that did communicate information, but it was not linguistic persistence.

When did it first happen?

There is general agreement on this …

It is generally agreed that true writing of language (not only numbers) was invented independently in at least two places: Mesopotamia (specifically, ancient Sumer) around 3200 BC and Mesoamerica around 600 BC. Several Mesoamerican scripts are known, the oldest being from the Olmec or Zapotec of Mexico.

The next leap forward, one that is recent enough for us to name names, was the ability to rapidly reproduce written information in bulk and then distribute it on a vast scale.

One name stands out – Johannes Gutenberg around 1440 changed our species forever.

This vast increase in the flow of information changed the very structure of society. Ideas flowed through national borders in a manner that altered the existing political and religious power bases. Words used to describe how profoundly things changed include “Enlightenment”, “Renaissance”, and also “Revolution”.

Telegraph, Telephone, Television were all further steps, each brought accelerations in the flow of information. I’ve lumped them together, but it can be argued that I should not have done so.

This is the one we are all familiar with because we are now living in the eye of this storm.

Once again, yet another acceleration in the flow of information. We all now carry within our pockets access to all human knowledge. It binds us as never before in undreamed ways, and we have yet to truly grasp the significance of what it is doing and how it is changing us all.

We now face new challenges. With such a vast flow of unfettered information, how do we work out what is and is not true?

The emergence of the printing press saw a sharp uptick in literacy. That broke the previous monopoly of the elite on education and learning.  It nurtured a new educated middle class – that was a literal restructuring of the existing human culture. It is distinctly probable that a similar structural change, a cultural re-alignment will naturally emerge due to the latest vast increase in the flow of information.

Today many are digital colonisers and are still just beginning to explore this new digital landscape. But what about the next generation, those born into this age as digital natives with no memory of a pre-digital age. As they grow they will interact with the world and those around them in uniquely new ways and so they are perhaps the true digital pioneers.

OK, so that was my attempt to list five key moments in human history, all provoked by a rather silly religious meme on Facebook. That in itself perhaps illustrates just how profound this new latest increase in the flow of information can be. Bad ideas should not simply be met with mockery and laughter, but should also be countered with a flow of far better ideas.

What is common to all five moments I’ve listed is rather obvious – each saw a radical increase in the flow of information between individual humans in a manner that truly transformed us. It leaves me wondering what comes next.