Hey, this is something new, #‎ExMuslimBecause‬ has been trending on twitter.

One of the most powerful arguments against religious belief often comes, not from those that do not believe, but rather from the actions and behaviour of those that truly do, and then follow it through to the letter. A Christian example of this that springs to mind is the rather common anti-gay stance promoted by many, but when it comes to Islam beliefs, we rather sadly need not look too hard to find rampant intolerance, homophobia, violence and murder. Do all Muslims behave like that? Nope, but the observation that the Quran and also the hadiths do, when read literally, justify such behaviour.

In response to recent events, the Twitter hash tag #‎ExMuslimBecause‬ is trending, and so here, grabbed at random are a few of the top samples …

Sent to us to tweet anonymously by an #ExMuslim woman who is afraid to speak up openly. #ExMuslimBecause pic.twitter.com/qMKfXFau3u

#ExMuslimBecause I have lived in an Islamic state in Iran. Nothing could be worse@CEMB_forum pic.twitter.com/Lpn5Xq0Dme

It is not all positive

As you might expect, there is also rather a lot of backlash happening under that same hash tag … and that perhaps in itself only confirms that those brave enough to take a stand and declare that they have left Islam have indeed made the right choice.

Is some of that backlash really bad? 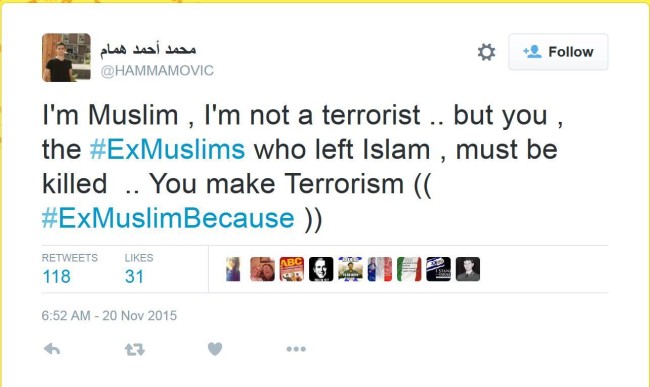 As an aside, he has been shamed into deleting his account.

The Internet has disrupted rather a lot – we now live in a world where the largest Taxi Company (Uber) owns no taxies, and the largest media company (Facebook) creates no content, and so it should be no surprise that belief is also being disrupted and challenged as never before because of this greatly accelerated means of communication. In this instance the voiceless have taken to twitter to band together with one voice that reaches out across the planet right across borders and enables them to express their disbelief as a response to absurd ideas and abhorrent behaviour that they endure. No longer can such rebellion be gagged or suppressed with threats and intimidation.

More of the #‎ExMuslimBecause tweets

Ali A. Rizvi has a small collection on his Facebook feed …

It was written by Mr Rahman over the course of 8 years and details his reasons for leaving Islam & becoming an agnostic humanist, and is a comprehensive and objective study for Muslims seeking a fair & balanced analysis of traditionalist Islam; and for non-Muslims interested in gaining rarely found insights.