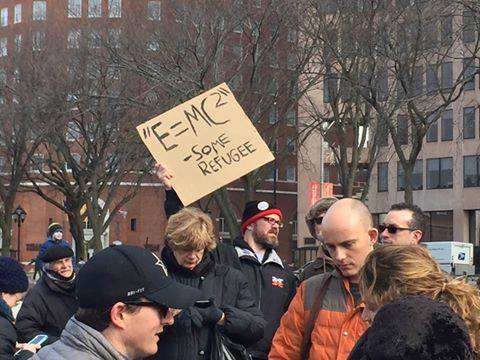 Jump in taxi in London, or for that matter any major city, and you will potentially listen to a monolog from your driver that will make you cringe as a torrent of quite frankly weird ideas pour forth. Having paid a fare most of us move on with a parting thought that the world is a far better place because nobody would ever seriously support such nonsense. If the driver was ever in a position of actual political power then we would be in deep deep trouble.

Trump is what you get when that actually happens

The core issue is not Trump himself, but instead is the fact that so many around him grant him support.

Compulsive liars shouldn’t frighten you. They can harm no one, if no one listens to them. Compulsive believers, on the other hand: they should terrify you. Believers are the liars’ enablers. Their votes give the demagogue his power. Their trust turns the charlatan into the president. Their credulity ensures that the propaganda of half-calculating and half-mad fanatics has the power to change the world.

It might indeed be tempting to believe that his enablers are poor ill-educated rural white working class males, but that is to some degree a myth. One example that illustrates this is no less a person than the UK’s female highly-educated upper-class prime minister along with most of her cabinet. In a normal universe nobody would anticipate such a degree of Trump support, yet there it is.

What about the media?

In times past, even the smallest of white lies would be headline news. The mainstream media would shine a bright spotlight upon the culprit forcing him or her to slink away in shame. Here we also find another powerful enabler …

When confronted with men who lie so instinctively they believe their lies as they tell them, they [the media] can only insist on a fair hearing for the sake of “balance”. Their acceptance signals to the audience the unbelievable is worthy of belief.

There is rather a lot of political hypocrisy and that also has become an enabler. Yes, Trump’s Muslim ban is an appropriate target for criticism, silence is not an option, and so many liberals are quite rightly doing so. But where were those same critics when the banned Muslim nations where doing exactly the same? These same Arab countries deny all Israeli Jews admission today, and yet the stunning silence about that in itself from Trump critics becomes a Trump enabler.

A popular idea is the thought that what we observe is totalitarianism similar to the 1930s … but no, this is something different …

When I floated it with the great historian of Nazism, Sir Richard Evans, he almost sighed. It’s not just that there aren’t the death camps and torture chambers, he said. The street violence that brought fascists to power in Italy and Germany and the communists to power in Russia is absent today.

Today’s dictators do not declare themselves as such, but instead they wear a mask of the man of the people. Not even Putin dares to grasp the role of outright dictator.

And yet there are Nazi comparisons that are valid

History does contain echoes that are very familiar to us all …

Hannah Arendt described leaders who knew their followers would “believe the most fantastic statements one day, and trust that if the next day they were given irrefutable proof of their falsehood, they would take refuge in cynicism”. She was describing Mussolini, Hitler and Stalin. But her words apply as well to today’s Trump supporters, who gulp down incredible falsehoods and then dismiss the “crooked media” when the stories collapse.

Despite the valid comparison, we are not prepared for what is now happening, the tide of the norm has retreated and left all the commentators stranded and helpless upon the beach with no idea of how to now react.

Conventional politicians and commentators are stranded because they were wholly unprepared for the new breed of leader who lies as a matter of policy as well as a matter of course. They are flailing around, and inventing phrases like “fake news” and “post-truth politics” to capture a state of affairs they think is entirely novel. Instead of saying that we are seeing something new, it is better to accept that something old and malignant has returned like foul water bubbling up from a drain.

Are you familiar with the term narcissistic personality disorder?

Let me run the symptoms by you.

Now who does that remind you of?

Why would any rational nation permit this to happen and by doing so risk complete destruction?

Overconfidence and the Attainment of Status in Groups

The 2010 paper published by the University of California does contain some insights.

Individuals who occupy positions of high status and authority tend to engage in overconfidence more than others. While prior work suggests that this excessive overconfidence is partly a product of their elevated status, the current research tested whether overconfidence can also lead to status: Are individuals with overly positive self-perceptions of ability more likely to attain status in the first place? Three studies of task-focused dyads and groups involving laboratory and field settings found support for this hypothesis. Further, the relation between overconfidence and status was consistently mediated by peer-perceived competence: overconfident individuals attained status because others inaccurately perceived them as more competent.

In other words … “compulsive liars can create compulsive believers“.

To put that another way, we can envisage Trump saying something like this … “Some people fake their death, I’m faking my life.”

With the thought that past behaviour is an indicator of future behaviour, we have this sordid little saga …

In 1989, a white investment banker called Trisha Meili was horribly beaten and raped in New York’s Central Park. She had lost three-quarters of her blood and gone into a coma by the time the police found her. The authorities arrested five juveniles, four black and one Hispanic. In one of his first moves from business into politics, Trump said death was the only punishment they deserved. He took out adverts in the New York press declaring: “Mayor Koch has stated that hate and rancour should be removed from our hearts. I do not think so. I want to hate these muggers and murderers. They should be forced to suffer and, when they kill, they should be executed for their crimes. CIVIL LIBERTIES END WHEN AN ATTACK ON OUR SAFETY BEGINS!”

Trump dealt with the accusations of racist scaremongering by rehearsing a self-pitying line that would serve him well in the future. Whites were the true underprivileged in American society, he told NBC television. “A well-educated black enjoys tremendous advantages over a well-educated white in terms of the job market. If I were starting off today, I would love to be a well-educated black.”

You may oppose the death penalty. You may find Trump’s language reeked of the Munich beer hall. Cynical New Yorkers noted at the time that Trump was feuding with city bosses over tax abatements for his developments and was using the rape to attack a mayor who had damned him as “greedy”. For all that, you could think that this was still a legitimate response to a foul crime.

But mark the sequel. In 2002, a career criminal admitted to the rape and DNA evidence proved he was telling the truth. The police, it turned out, had forced confessions from their teenage suspects. The boys, now men, were released. But Trump refused to concede an inch of ground. He would not accept new evidence had put him in the wrong and the five were innocent. Even in 2014, when New York finally reached a compensation settlement with the victims of police abuse, Trump was still insisting that “settling doesn’t mean innocence” and the taxpayers of New York had been fleeced.

He will always attack and never conciliate. This does not bode well for the days ahead. Basic attributes such as truth, reason, evidence, and decency have all been discarded.

Will the checks and balances prevail and reign him in? Will his pragmatic approach to much temper his extremes?

So what should we do?

Nick Cohen does have some sensible advice …

go back to the despised and patronised working-class followers of the right. You should try to win them over in elections rather than march with the already converted at rallies. You should cordon off the true racists and fascists and listen to and argue with the rest with a modicum of respect. If that can happen, then perhaps the world will learn that the best way to end the power of compulsive liars is to break the compulsion of their followers to believe.