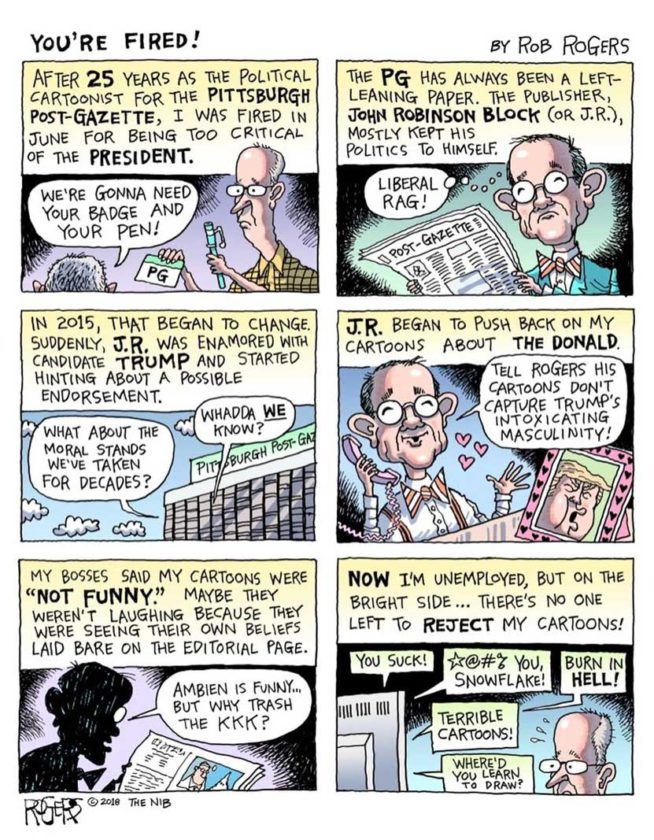 Rob Rogers spent many decades being the Pittsburgh Post-Gazette cartoonist, but ended up being fired because he created cartoons that criticised Trump.

Yesterday Nib has published, in cartoon form of course, a comic that he has written to tell the story of what happened. It is titled  “I Was Fired for Criticizing Trump.”.

Here is a brief sample

He is quoted as explaining …

“The more I worked on it, the more I realized there wasn’t room for all the outrage and betrayal I wanted to squeeze in.” 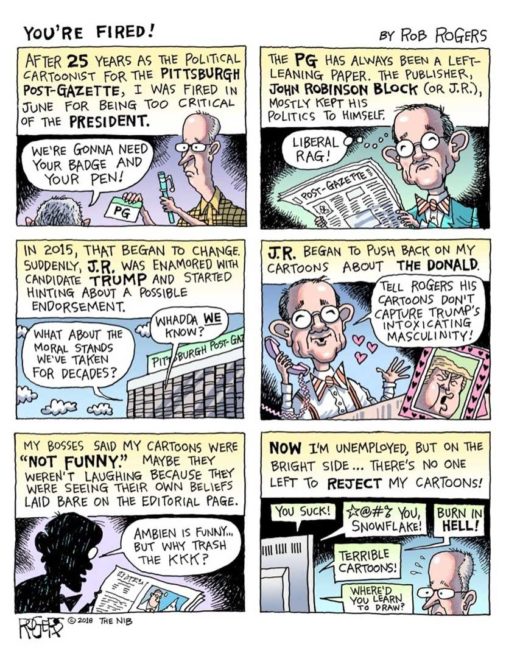 The invitation to have such a forum came from Matt Bors, the founder of the Nib and, like Rogers, a past Pulitzer Prize finalist for editorial cartooning.

“Did the Pittsburgh Post-Gazette really think they were going to muzzle Rob?” Bors asks The Washington Post’s Comic Riffs, referencing how the newspaper, under publisher John Robinson Block, spiked 19 of Rogers’s cartoons this year before ultimately firing the 25-year staff cartoonist on June 14.

“All the publisher did,” Bors continues, “was ensure his name would go down in history for firing a political cartoonist at a time when the president is demonizing the press.”

Block told The Post in a statement last month that the work dispute with Rogers was more about editorial collaboration than political ideology. Block later told Politico that the issue was more about curbing the Rogers cartoons that were critical of President Trump, claiming that Rogers was “obsessed with Trump.”

Quite frankly, any newspaper cartoonist not going after Trump is simply not doing his job.

What cartoons got him fired?

These, and also variations of these. They are funny because they are also true …

I am back at the drawing table today working on an immigration cartoon for syndication tomorrow. Until then, I figure this killed cartoon is worth a repost. #TrumpandtheBabySnatchers #TrumpCamps #Trump #ImmigrantChildren #Immigration pic.twitter.com/EtZ6LTtR28

Rogers’s political cartoons continue to be distributed by Andrews McMeel Syndication, and it was announced last week that the Corcoran School of the Arts & Design at George Washington University will host a pop-up exhibit of 18 of Rogers’s killed cartoons, titled “Spiked,” in collaboration with the University of Pittsburgh and the Association of American Editorial Cartoonists.

Here are a few more recent examples from the man who refuses to be gagged and silenced. Unfortunately Pittsburgh Post-Gazette don’t get the see these, but all those that are part of the syndication feed will.

Th Supreme Court ruled that it is within the scope of power of the president to be a xenophobic bully. Nice.

I will never understand how Trump's base can stay with him when he lies constantly, kills their jobs with tariffs, maligns our allies, coddles dictators and creates baby prisons! Here is my Zero Tolerance cartoon: https://t.co/xxD0Z2kbZo #Trump #TrumpConcentrationCamps pic.twitter.com/MqHGgqnfzK