Over a year ago I wrote a posting about a claim that a girl had been stoned to death in Syria for the crime of posting to Facebook. At that time I pointed out a few things …

So when it comes to that specific claim, no I still do not believe it because nothing new has emerged from an independent source to confirm it.

Looking at the statistics, I can see that my post is getting lots of hits at the moment, and one commenter asks …

There was still a young woman being stoned to death!
Men standing around kicking her and throwing large rocks on her until they killed her while they filmed it!!!
It still happend!
That still exists.
What’s the story?

OK, let’s take this a step at a time.

Do innocent young 13 year old girls get condemned and then stoned to death by Sharia Courts?

Yes they do, and we can verify that. The example that immediately springs to mind is the tragic story of Aisha Ibrahim Duhulow. She was brutally raped and when she attempted to report it to the authorities, she was arrested put on trial for adultery, then stoned to death, and the rapists walked free.

The BBC verified this as did Amnesty International and many others, it really happened.

Indeed they are. Back in 2012 there were widely circulating claims that thousands of Muslims were being slaughtered in Burma by Buddhist monks.

Ever so slight flaw, the claims being circulated were fake and clearly designed to stir up hatred, and so I posted an expose of that. Here is an example of a claim that circulated on Facebook at the time … 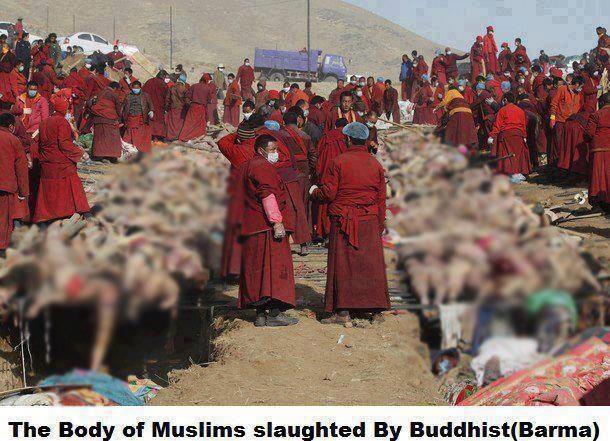 The problem is that the above was actually a picture of Buddhist monks assisting after a devastating earthquake in Tibet, it had simply been repurposed.

Now don’t misunderstand me here concerning Burma, the Rohingya Muslims do indeed face some extremly serious human rights abuses, but claims that Buddhist monks have been slaughtering thousands is pure fiction that is designed to stir up hatred.

OK, so are ISIS the good guys after all and simply had a bit of bad press?

I don’t think I need to actually address this one because we all know the truth of this. The ongoing stream of ISIS brutality is well documented and so the observation that they are simply a gang of brutal and completely ruthless religious thugs that display all the attributes of psychotic behaviour is beyond all doubt. The United Nations has held ISIL responsible for human rights abuses and war crimes, and Amnesty International has reported ethnic cleansing by the group on a “historic scale”.

But if you do doubt even this, then click here.

But why fake a stoning claim against ISIS?

It was Feb last year, and so I can envisage a Shia desire to poke the international community for a bit more assistance at that point in time by stirring up western public opinion. A lot has emerged since then and at that point in time “Jihad John” was not yet a turn of phrase within the public domain.

In the end if we are going to condemn them, then we should do so for what they actually do, and not for fictitious claims. There is also a hidden danger that revolves around the promotion of fictitious claims. When they are exposed as fraudulent, then that creates the illusion in the minds of many who sit on the fence that the other quite real acts of brutality might also be fake. ISIS is a variation of Sunni Islam, and on the planet today there are vast numbers of Sunni Muslims who watch and listen – together with them we should stand to condemn the actual acts of violence.

Most humans are decent honourable people who strive to live good lives and live in peace with those around them, and being Muslim does not generally nullify that reality, but the promotion of fictitious claims that are then exposed as fraudulent does indeed risk granting ISIS utterly unwarranted sympathy within the Sunni community, so we should not permit that to even happen by weeding out fact from fiction, and excising doubt when appropriate, even when the assertion is one that supports a stance we adhere to.